Critics gear up for response to lease sale in Arctic refuge 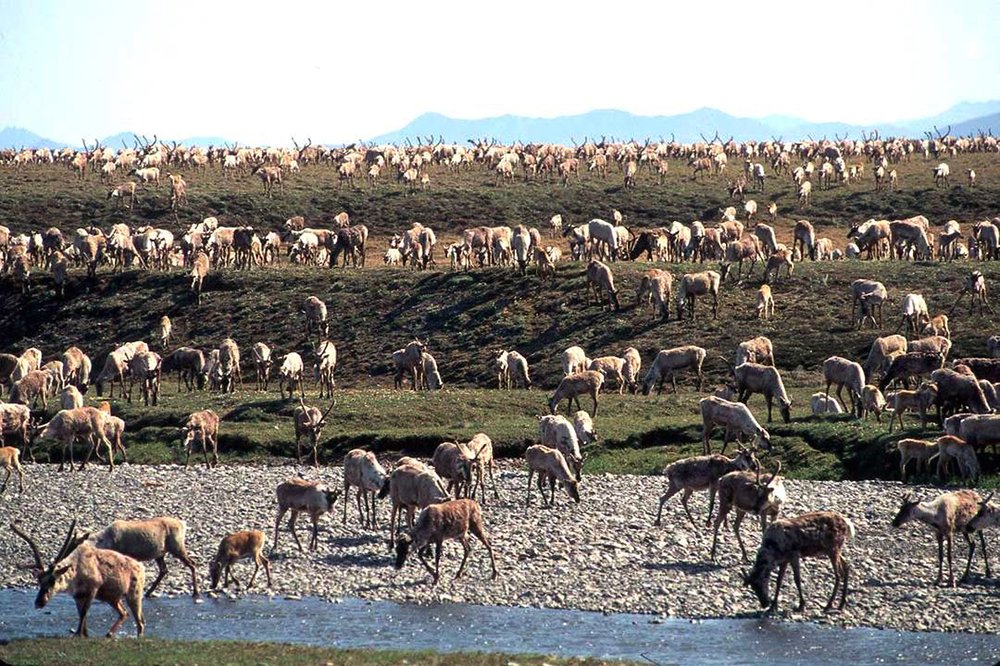 Caribou from the Porcupine Caribou Herd migrate onto the coastal plain of the Arctic National Wildlife Refuge in northeast Alaska. Opponents of oil drilling in the largest US wildlife refuge have a message for oil drillers and the people who finance them: Don't become the company known for the demise of America's polar bears. (Photo: AP)

Opponents of oil drilling in America’s largest wildlife refuge have a message for oil drillers and the people who finance them: Don’t become the company known for the demise of America’s polar bears.

The Department of the Interior hopes to conduct a lease sale in the Arctic National Wildlife Refuge by the end of the year but environmental groups say they will challenge those plans in federal court and the court of public opinion.

“We will not tolerate the administration’s brazen attempt to paper over the impacts of this disastrous proposal, and we will see them in court,” said Jamie Rappaport Clark, executive director of Defenders of Wildlife.

They claim an environmental review was rushed, incomplete and preordained and that it presents only a fraction of the long-term damage that will occur if drilling rigs are allowed into what’s now a wilderness area.

“Speculative threats of legal action cannot cloud the reasoning contained in our analysis, which was developed with information provided by numerous stakeholders, including tribal elders, wildlife biologists, anthropologists and elected officials, in addition to data-sharing with the Canada government’s Environment Yukon and dialogue with the International Porcupine Caribou Board, as well as almost 2 million public comments submitted during the process,” Bureau of Land Management spokesman Derrick Henry said in an email to The Associated Press.

“This analysis is a big step in carrying out the clear mandate we received from Congress to develop and implement a leasing program for the Coastal Plain,” Henry wrote, adding that any future actions would require separate environmental analysis.

The refuge in the northeast corner of Alaska was created in 1960 and expanded by Congress in 1980 to nearly the size of South Carolina. About 12,500 square miles (32,375 sq. kilometers) are formally designated as wilderness. However, Congress ordered that 2,300 square miles (5,957 sq. kilometers) of refuge coastal plain be studied for natural resources.

The coastal plain is the area between the Arctic Ocean and mountains of the Brooks Range. During winter, pregnant polar bears use it for dens. In spring, it’s the preferred nursery for the Porcupine Caribou Herd.

The U.S. Geological Survey estimates the plain holds 10.4 billion barrels of oil. U.S. Sen. Lisa Murkowski, R-Alaska, has called the coastal plain North America’s greatest prospect for conventional petroleum production. Drilling is supported by virtually everyone elected in recent years to statewide office in Alaska because it would create jobs, put oil in the trans-Alaska pipeline and put cash in the coffers of state government.

Congress did not take a direct vote on opening the refuge. Instead, a provision for lease sales was included in President Donald Trump’s Tax Cuts and Jobs Act in December 2017. The law amended the tax code, reduced tax rates for businesses and individuals and aimed to make up for the loss of that revenue with new money generated by sources that include lease sales in the Arctic wildlands. Henry said that act requires a lease sale by 2021.

The Bureau of Land Management spent a year on an environment review and by February was holding public hearings in Alaska on the document. The environmental review listed a “no-sale” alternative but the agency did not consider it, said Joe Balash, the Interior Department’s assistant secretary for land and minerals management at the time.

“A no-action alternative would fly in the face of what Congress told us to do,” Balash said at the Anchorage hearing.

The group on Oct. 15 took out a half-page advertisement in the Wall Street Journal telling potential bidders that they will face legal challenges and damage to their reputations if they bid on the refuge.

“It’s not something we are just going to accept because it was snuck into a tax bill,” said director Desiree Sorenson-Groves.

“There should have been fair and open debate and there wasn’t,” she said. “If oil companies and folks want to bid on this, they need to do it with their eyes wide open.”

“Until we see the record of decision, we can’t say anything about potential lawsuits or the specific grounds for them, but I can tell you that the final EIS (environmental impact statement) is so deficient in how it looks at impacts to the coastal plain, and so dismissive of the legal requirements for protecting these sacred lands, that there could be many, many grounds for a lawsuit,” said Brook Brisson, an attorney for Trustees of Alaska.

More than 80% of the coastal plain serves as critical denning habitat for threatened polar bears, said attorney Kristen Monsell of the Center for Biological Diversity, adding the BLM significantly underestimates effects of seismic testing and other exploration activity.

“Even under ideal conditions, den detection surveys are effective only 50% of the time,” she said. “This means that the agency arbitrarily dismissed the risks from seismic, including the likelihood that denning polar bears will be run over and killed by seismic vehicles.”

The review fails to take a hard look at greenhouse gas pollution on polar bears, she said, both emissions from oilfield operations and emissions produced by oil extracted from the refuge.

“It does not acknowledge how the direct, indirect and cumulative impacts of opening the refuge to drilling will affect the likelihood of sea ice loss destabilizing the established polar bear recovery thresholds,” she said.

Changing the law that requires lease sales is the ultimate goal, said Sorenson-Groves. The short-term goal is to let oil companies, financial institutions and insurance companies that there will be consequences if they are involved with bidding on refuge leases.

“Do you want to be the oil company that helped put polar bears on the endangered species list?” she asked. “These are serious questions that you have to grapple with. They’re not going to get a pass.”