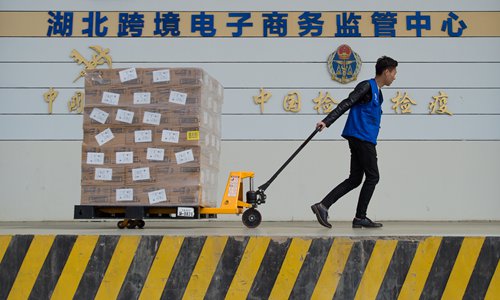 Whenever Liu Lin finds herself missing England, where she has previously studied, she just hops onto a cross-border e-commerce platform to buy herself some British-made merchandise.
"Some of the products I used to purchase there, such as a brand of combs made in England, aren't sold in China, so I buy them from overseas," she said.
Shopping for foreign products has never been easier for Liu and other Chinese like her. But imported makeup, food and clothes from other countries can now all be obtained with one swipe of the phone.
China's cross-border e-commerce platforms have developed rapidly in just the past few years. Many online shops both in and outside of China, especially those from Belt and Road countries, are taking advantage of this phenomenon, with both the foreign retailer and the Chinese shopper benefiting.
Cross-border e-commerce is now a bright, shining highlight of China's ever-growing foreign trade. According to data from the China Electronic Commerce Association, in the first half of 2017, China's cross-border e-commerce trade reached 3.6 trillion yuan ($541.87 billion), up 30.7 percent from last year.
China has also released a series of new policies to further develop cross-border e-commerce, such as increasing the efficiency of products going through customs and supporting enterprises that establish overseas sales channels. 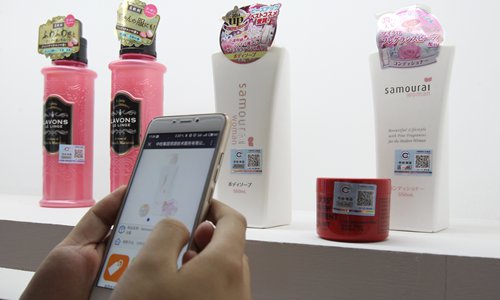 A buyer compares foreign goods on a cross-border e-commerce website with products sold at a market in Henan Province. Photo: IC

Selling by the millions
In September, Chinese premier Li Keqiang said at an executive meeting of the State Council that there needs to be more development of cross-border e-commerce on a bigger scale, including encouraging enterprises to develop through Belt and Road.
Data shows that the trade volume of countries along the Belt and Road accounts for a quarter of China's entire foreign trade. In this case, cross-border e-commerce can be a large boost for trade.
Shops both in and outside of China are benefiting from being placed on such platforms. At a recent cross-border e-commerce convention, the director of Jilin's Guhetai Machinery told Economic Information Daily that 80 percent of his company's clients were found via the platform.
In the 18 months since Guhetai Machinery first started using e-commerce platforms, the security safes it produces have been sold to numerous Belt and Road countries. According to a new research report from Chinese e-commerce giant Jingdong (JD), many Chinese companies have successfully extended their brands overseas.
Electronics brand Puppyoo, for instance, became the highest-selling small electronics seller after joining JD's cross-border e-commerce platform. Local wig maker Allrun has also successfully established clients in 92 countries. Earphone brand Bluedio and male clothing designer Freesoldier have likewise successfully exported through the platform.
Foreign companies are also placing themselves on Chinese e-commerce platforms in order to make direct contact with Chinese customers. By the first half of 2017, Internet giant NetEase's platform Netease Koala successfully established cooperation with 279 foreign brands along Belt and Road, with a sales volume of nearly 200 million yuan, according to Wang Zheng, senior press relations manager for Koala.
Famous foreign companies, such as Korean cosmetics titan L&P, Panasonic and Herobaby milk formula from Europe, have also signed contracts with Koala. The platform promoted Thailand's latex pillows and successfully doubled its sales in China in 2016. Koala was awarded by the Thai embassy in China for its success, Wang said.
The JD report also pointed out that many smaller countries prefer to focus on selling their specialties to China via these new platforms. A few examples are cotton products from Egypt, black tea from Sri Lanka, jade from Myanmar and rose essence oil from Bulgaria.
In 2016, companies from Belt and Road countries were on top of the list for increasing sales to China. Countries such as Bangladesh and Lithuania realized a 60 percent increase in sales compared to the year before.
Among the products being sold, food from the Belt and Road countries is the most popular. Fruits and vegetables are also rising stars in China's cross-border e-commerce. In 2016, Mexican avocados, Chilean cherries and Filipino dried mango were selling by the millions to Chinese online shoppers. 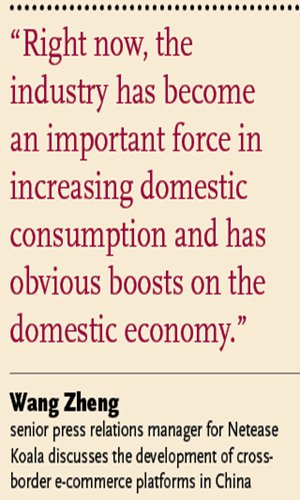 For Chinese consumers in years and decades past, the only way to buy foreign products without leaving the country was purchasing through an agent. But this way of shopping was very slow, sometimes taking months, and there was no way to ensure authenticity. Furthermore, agents charged considerable markups for their products, Liu said, sending the entire sector into chaos.
A local shopper surnamed Cheng told the Global Times that, for the past several years, she has been using Chinese e-commerce platforms to purchase products from Europe, US and Australia. Specifically, she uses Xiaohongshu and Koala to buy cosmetics and handbags from those countries.
She said she appreciates the discounted prices, which are far cheaper than the same products being sold at brick-and-mortar foreign stores in China, as well as its convenience. "I can place an order without going out the door," she said.
Liu agrees that e-commerce platforms have made shopping in China much more convenient. In the past, when she wanted something from abroad, she'd either have to wait for a friend to visit that country or wait weeks and even months for old-school Western e-retailers like Amazon to ship them. Today, anything can be had in a matter of days.
"Sometimes, when I watch TV shows and see stars wearing foreign-brand clothes, I just hop on a platform like Koala and buy the same outfit," she said, adding that due to Taobao's reputation for selling counterfeits, fakes and knockoffs, she'd prefer to pay a bit more for the peace of mind that a trusted seller provides.
Government policies support cross-border e-commerce by cutting down on costs and increasing efficiency, Wang said. The government offers a 30 percent tax discount for cross-border e-commerce platforms, which allows local consumers to enjoy authentic, high-quality products at affordable prices.
The government is also now allowing cross-border duty-free warehouses. Zhang Chao, deputy director of startup Xbniao.com, told media his company has benefited from these new governmental policies. An important feature of Xbniao, according to Zhang, is that it has overseas warehouses and operation centers, which allows them to ship products to 45 countries and regions around the world.
As the government supports Belt and Road construction, it also supports cross-border e-commerce companies establishing overseas warehouses along Belt and Road logistics hubs; platforms that already have warehouses, such as Xbniao, have a competitive edge.
There are problems that still need to be tackled. According to media reports, language is still a big barrier preventing Chinese companies from increasing their business in foreign countries through e-commerce. Media has reported on companies recruiting talents who speak the languages of smaller countries.
"It is shown that the government supports and encourages the development of cross-border e-commerce business and also regulates it," Wang said. "As policies improve and develop, the market is sure to welcome new development. Right now, the industry has become an important force in increasing domestic consumption and has obvious boosts on the domestic economy."
Agencies contributed to the story
Belt & Road Best Sellers
Best-selling "Made-in-China" products along the B&R:
Cellphones, computers, Internet products, electronic components, furniture and textiles