Oil prices rose on Friday, making the largest weekly gain since July, supported by concerns about the possibility of Western military action in Syria and reports of dwindling global oil inventories. 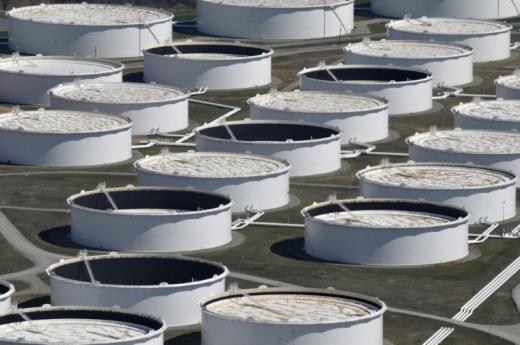 Crude oil storage tanks are seen from above at the Cushing oil hub. (Photo: Reuters)

US West Texas Intermediate crude CLc1 futures rose 32 cents to $67.39 a barrel, up 8 percent for the week.

Both benchmarks hit their highest since late 2014 on Wednesday after US President Donald Trump  warned that missiles "will be coming" in response to a suspected gas attack in Syria and after Saudi Arabia said it had intercepted missiles over Riyadh.

Trump tweeted on Thursday that an attack on Syria "could be very soon or not so soon at all," raising the prospect that an attack might not be as imminent as he seemed to have suggested the previous day.

"This has been a very strong week for crude oil futures, with a lot of geopolitical concerns helping to drive the rally. As we start the last day of the week, we feel that the geopolitical risks are not as high as feared three days ago," Swiss-based oil market consultancy Petromatrix said in a note.

"The Syrian escalation risk cannot be fully written off, but we view that it deserves less of a premium than three days ago."

A global oil stocks surplus is close to evaporating, the Organization of the Petroleum Exporting Countries (OPEC) said on Thursday, adding that its collective output fell to 31.96 million barrels per day (bpd) in March, down 201,000 bpd from February.

Vienna-based OPEC and its oil producer allies are poised to extend their supply reduction pact into 2019, even as the global glut of crude looks set to be eradicated by September, OPEC Secretary-General Mohammad Barkindo told Reuters.

The International Energy Agency (IEA), which coordinates the energy policies of industrialized nations, signaled that markets could become too tight if supply remains restrained.

"It is not for us to declare on behalf of the Vienna agreement countries that it is 'mission accomplished,' but if our outlook is accurate, it certainly looks very much like it," the IEA said.