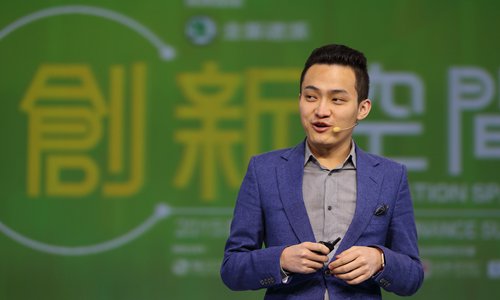 Cryptocurrency entrepreneur Sun Yuchen apologized on Thursday for engaging in personal hype and excessive marketing for his business, after public criticism of his erratic rhetoric following the abrupt cancellation of a charity lunch with US financier Warren Buffett.

"My original intention to bid for the charity lunch was good, with some selfish motives to promote the blockchain business and myself. But due to my immature words and deeds, the event turned into a marketing stunt that got out of control and failed," Sun said in an apology letter posted on his Weibo account.

"It had an unexpected outcome…had a bad impact on the public and also caused concern among industry regulators," Sun stated, saying that he feels "deeply guilty."

Sun said he will take some time to rest and tend to his health.

"I expect to return to the exploration, research and development of blockchain technology, keeping away from marketing and personal hype."

But few bought his apology. "Sun has tasted a bitter outcome as his hype and marketing have caught the attention of government regulators, and he has put himself on the watch list," a netizen named Fayiboshi said.

"Sun is likely facing strict scrutiny from the regulators, otherwise he would not easily bow his head," netizen Biteshaoniao commented.

"It's normal that young entrepreneurs encounter setbacks when they start business and the public can be tolerant. But if one is dishonest and erodes the credibility of his firm, these mistakes couldn't be forgiven," a Beijing-based market observer surnamed Chen told the Global Times on Thursday.

"Advancing the development of the blockchain sector in a down-to-earth manner would be the right choice for him," Chen said.

The TRON price dropped more than 20 percent in the previous four days.

Sun, founder of TRON, said on Tuesday that he had to cancel his lunch with Buffett due to a sudden attack of kidney stones.

As public suspicion of Sun and his business mounted, the 21st Century Business Herald reported on Tuesday that he was suspected of engaging in illegal fundraising, money laundering, brokering prostitution and gambling.

Caixin News reported on Tuesday that Sun was barred from leaving the country and that China's internet finance regulator had asked the police to investigate his business.

Sun denied media reports on Weibo that he was involved in illegal fundraising and money laundering. He also refuted the Caixin report by live-streaming himself from his San Francisco apartment on Wednesday.