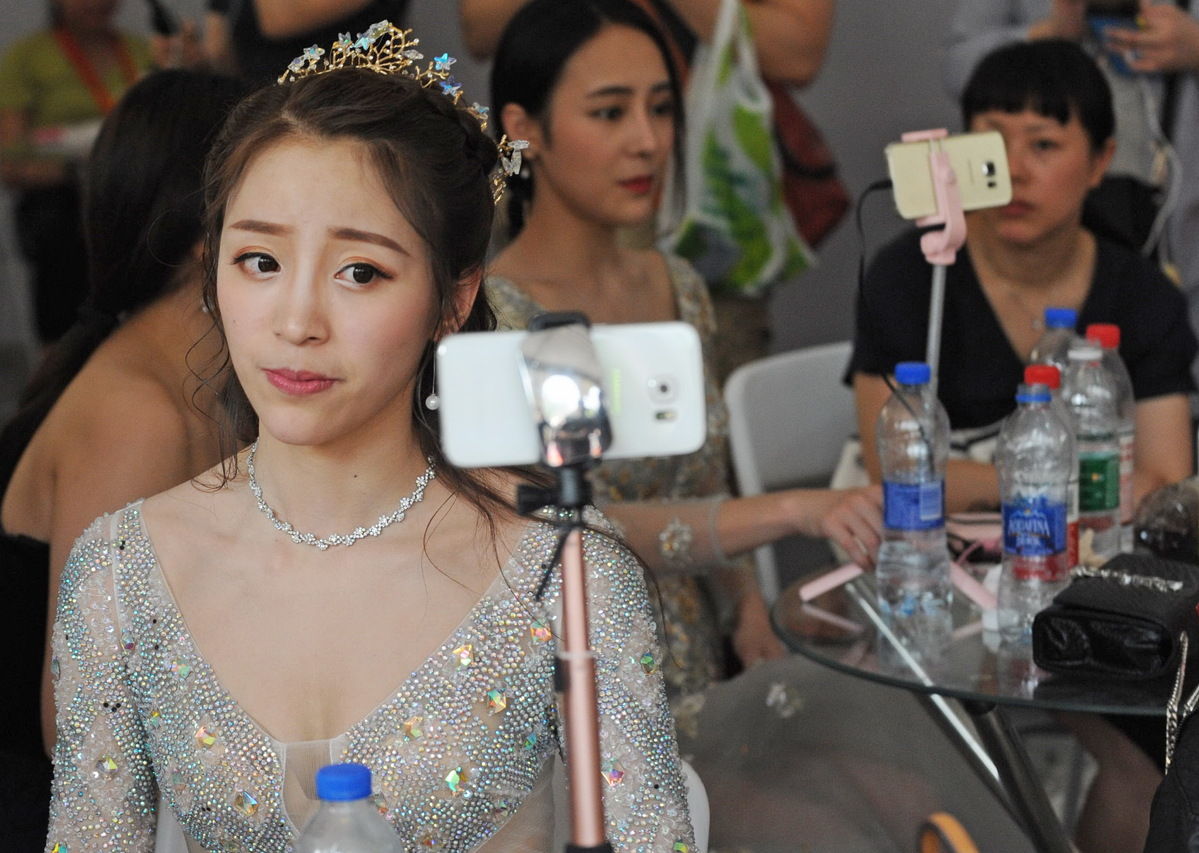 An online celebrity reacts for her followers via a livestreaming app in Wuhan, capital of Hubei province. (Photo by Miao Jian / For China Daily)

Promoting brands, products now a main way for them to make money

China's online celebrity industry expanded in 2017 and social media personalities are becoming even more skilled at converting their influence into cash, a report said.

"By May 2018, cyber celebrities with a fan base of more than 100,000 increased 51 percent from a year ago and their total followers surged 25 percent to 588 million," said the report titled 2018 China Online Celebrity Economic Development Insight. It was jointly published by market research consulting firm iResearch and social media platform Sina Weibo on Tuesday in Shanghai.

Based on analysis of the status and prospects of the cyber celebrity economy, the report found that the number of Chinese internet celebrities and their followers had grown extensively in the past year.

The rise of internet celebrities and potential audience reach has empowered the sector to develop and gradually form a complete value chain.

Monthly active users of Weibo reached 411 million in the first quarter of this year, and daily active users reached 184 million, according to Cao, who added that the more than 20,000 Weibo top celebrities, each of whom has more than 1 million followers, are becoming influencers in their specialized areas.

Through posting words, pictures, audio clips, video clips and livestreaming online, the celebrities are turning their fame and influence into real cash.

Video clips are one of the core exhibiting methods for online celebrities to present their content. The report noted that video clip market value surged 156.3 percent to 4.87 billion yuan ($752.6 million) in 2017. It forecast this figure will triple to 19.52 billion yuan in 2018, and snowball to 79.71 billion yuan by 2020.

Similarly, as much as 45.32 billion yuan was generated in China through livestreaming last year, and it is projected to reach 112.09 billion yuan in 2020.

"It is content that can create value, and it is also content that can possibly reshape (traditional) business (models)," said Zhang Kaiyi, who has attracted 4.84 million followers since posting her first video clip in November 2017. She said her secret for popular video clips was to make them fun, life-oriented, creative and positive.

Due to the rising influence of online celebrities, many companies have turned to them to promote their brands and products. As a result, 57.53 percent of internet celebrities have signed promotion contracts in the past year, compared with only 23.1 percent in the previous year.