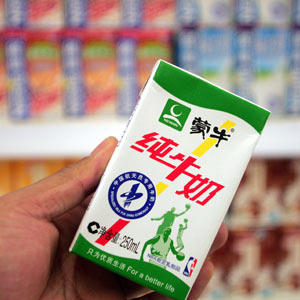 China Mengniu Dairy Co Ltd, the nation's leading dairy producer in terms of revenue, is banking on innovation to further open the doors for its globalization ambitions, its top official said.

"Innovation is inherent in our DNA and will be our calling card in global markets," Mengniu CEO Lu Minfang said in an interview with China Daily. "As the first Chinese dairy firm to go overseas, globalization is taken as one of our top priorities."

Lu made the remarks during the World Economic Forum's annual meeting of New Champions 2019, also known as the Summer Davos. The event was held in Dalian, Liaoning province, earlier this month.

Mengniu announced a strategic cooperation pact with top Uruguayan dairy producer Conaprole, and the pair will cooperate in trading related dairy products in the years ahead.

"The cooperation with Conaprole is part of our goal to leverage international resources to better serve customers both in China and abroad," said Lu. "With this transformation, Mengniu is now eyeing the global market to produce dairy products that can rival top ones in the foreign markets."

Industry insiders said the move marks an important step for Mengniu's expansion overseas, given that Uruguay is the ninth-largest dairy exporter in the world.

Shares of Mengniu in Hong Kong have risen steadily since the news, touching a 52-week high at HK$32.25($4.13) during the session on Thursday.

Lu said Mengniu has expanded its business to over 10 countries and regions such as Southeast Asia and Oceania, with many markets participating in the Belt and Road Initiative. "The BRI has offered us unprecedented opportunities and it will be one of our key business focus in the years ahead," said Lu.

Southeast Asia's 600 million people boast a naturally huge business market and the region has great potential in terms of economic growth, he noted.

"While beefing up in the Southeast Asian markets, we want to encourage a healthy style of eating food in the region," said Lu.

People around the world, especially the young, are paying more attention to their health, taking note of the food they eat and trying to adopt a healthy lifestyle.

To meet such demand, the company opened a factory in the Cikarang industrial zone in West Java, Indonesia, in November last year, its first factory in the region. The daily capacity of the plant has reached 260 metric tons, and the annual output value is expected to touch $160 million.

The company said it has started to sell its YoyiC liquid yogurt in Indonesia, the most populous country in Southeast Asia with more than 200 million people. In five years, the company is expected to offer 1,000 jobs to Indonesians.

Mengniu also has a presence in countries such as Australia, Singapore, Malaysia, Cambodia and Myanmar.

Analysts said the push by Chinese companies to expand abroad is also due in part to increasingly fierce domestic competition.

"As the bar for the food and beverage industry is relatively lower compared with other segments, the number of such companies is increasing at a very fast pace, making the domestic competition even more fierce," said a report by Qianzhan Industry Research Institute.

To give it an edge in global markets, Lu said the company is pushing its resources into innovation.

"Last year, we have poured a total of 160 million yuan ($23.3 million) in research and development, which was 20 percent more than that of the previous year," he explained.

Such a large investment will support Mengniu's business in foreign countries where dairy product markets are already mature.

Liu Peng, a food industry analyst from TF Securities, said the overseas mapping of Chinese dairy companies is to create an ecosystem by integrating resources all over the world.

"But the main challenge lies in whether these firms can succeed in foreign markets and attract local consumers with strong Chinese characteristics."

To name a few such products with broad appeal, the company has developed Tetra Pak's eight-sided packaging, which is easy to hold, and boxed dairy products that can be consumed directly from the pack.

Lu voiced agreement with the analyst from TF Securities.

"Going overseas is never easy and always brings challenges. Running a business in less familiar economies requires us to know better about the local culture, innovate our products and work with the locals," Lu said.

In New Zealand, 80 percent of Mengniu's staff are locals who understand domestic demand.

"After we acquired a large company in Australia in 2016, we retained 95 percent of their local employees," Lu said.

The dairy maker has seen growth in the sales of yogurt, low-temperature milk and cheese products in the past few years. Products with high added value in terms of flavor, nutrition, packaging and convenience are favored by more customers.

"Branding is our other strategy to make more foreign customers know better about made-in-China brands," he noted.

That can also be done through sponsorship of sports events.

"Sport is the mutually intelligible language for people of all nationalities and backgrounds. Therefore, sponsorship of sports clubs and international events can be extremely beneficial in assisting a market entry or simply raising a brand's international profile," David Haigh, CEO of Brand Finance, a London-based brand valuation consultancy, said in an earlier interview with China Daily.

Mengniu was founded in 1999 in the Inner Mongolia autonomous region. It sells liquid milk, yogurt, milk beverages, ice cream and other dairy products.

In the past 20 years, Mengniu grew from a small business in North China into one of the two biggest dairy product companies in the country, the other being the Yili Group.

Mengniu was one of the sponsors of last year's FIFA World Cup in Russia, which allowed the firm to broadcast a commercial during each of the 64 soccer matches in the tournament.

Lu recalled the founder of Mengniu aimed to be "a leader of dairy products in the Inner Mongolia autonomous region, then in China and finally in the world".