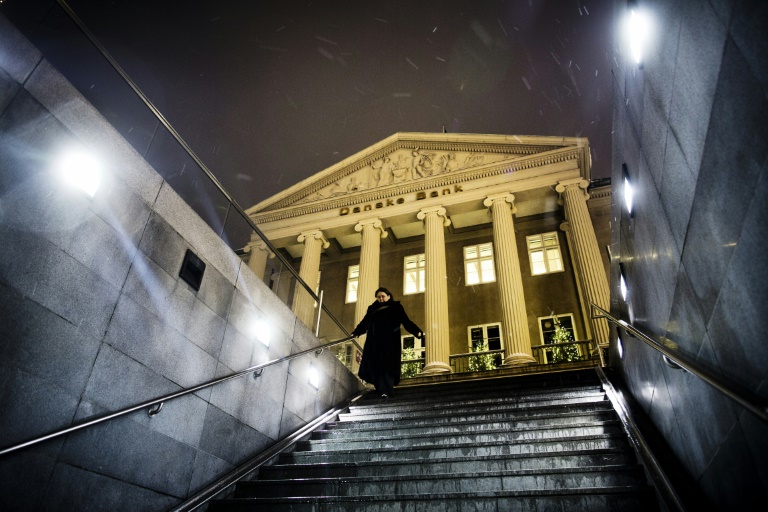 Danske Bank's market capitalisation has shrunk by a quarter in the past year (Photo: AFP)

Denmark, a Nordic kingdom not often associated with financial shenanigans, is facing a massive scandal with banking champion Danske Bank accused of helping to launder $8.3 billion through an Estonian subsidiary.

Danske, Denmark's biggest bank, had been in the crosshairs of investigators since Danish daily Berlingske last year claimed that it had been behind the laundering of around $3.9 billion of dirty money from a string of Eastern European countries.

But after receiving bank statements from 20 companies with accounts in Danske Bank's Estonian branch between 2007 and 2015, the paper this week reported that the real figure was actually more than twice that.

"This gravely serious case will become much worse if the latest information is correct," Denmark's business minister Rasmus Jarlov said on his Twitter account.

"This casts a shadow of doubt over the entire financial sector," Jarlov said, adding the Danish Financial Supervisory Authority is reviewing the information which appeared in Berlingske.

The watchdog is in contact with its Estonian counterpart to discuss possible actions.

An audit in the spring concluded that there was no basis for raising criminal proceedings against the bank.

"It is too soon to draw any conclusions about the extent of potential money laundering in Estonia," Danske Bank's head of group compliance, Anders Meinert Jorgensen, told AFP in an e-mail.

"That is the reason why we have not ourselves published figures or commented on speculations about potential amounts," he added.

The group has acknowledged that its control over the Estonian branch has not been good enough and launched its own investigation into the matter last year. The results are expected in September.

"Until the investigations launched have been completed in September...it would be wrong to speculate any further," Jorgensen said.

Danske Bank's share prices has fallen by over 25 percent over the past year on the Copenhagen Stock Exchange.

Unexpectedly, Danske finds itself in the company of other major European banks that have been ensnared in massive laundering scandals in recent years including France's BNP Paribas and Germany's Deutsche Bank.

"There is no doubt that even one krone laundered is one too many, and that we take this matter very seriously," Jorgensen said.

But critics are not convinced that they do.

"The extent of this case is so big that management should have been aware of the billion-dollar suspicious transactions," Danish legal adviser Jakob Dedenroth Bernhoft added.

The bank statements from 20 companies at Danske Bank are linked to a fraud case exposed by the Russian lawyer Sergei Magnitsky, who was jailed for revealing high-ranking Russian officials involvement in stealing massive tax payments from several companies, including the investment fund Hermitage Capital.

Magnitsky died in 2009 aged 37 after being held for a year and denied medical care.

Bill Browder, CEO of Hermitage Capital and Magnitsky's former client who was kicked out of Russia for exposing corruption at the largest state owned companies, said he has spent nine years tracking money laundering in the nation.

"We are currently drafting a criminal complaint with the new information revealed about money laundering at Danske Bank that we intend to file with the Danish and Estonian law enforcement authorities," Browder told AFP in an e-mail on Wednesday.

The US-born British citizen said the money was laundered at Danske Bank's Estonian branch between 2007 and 2015 after travelling through "a complex network of sham companies and money laundering banks" in Moldova, Estonia, Latvia, Lithuania and Ukraine.

Russia and Azerbaijan are also mentioned among the list of countries in Berlingske's report.

Browder has led a high-profile campaign in memory of his former employee.

In 2012, the US passed the "Sergei Magnitsky Act" which imposed a visa ban and froze the assets of Russian officials suspected in the lawyer's death.

"I've been on a nine-year fight for justice for Sergei Magnitsky which has included tracing the proceeds of the crime, which led us to Danske Bank," he said.