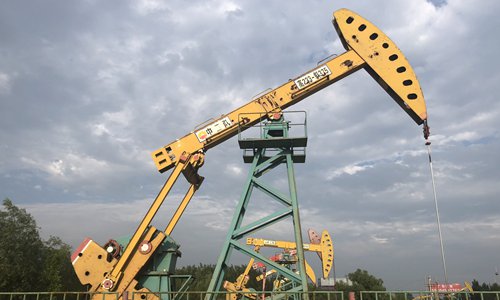 As the US presses ahead with a trade war to contain China, the Global Times reporter traveled to Daqing Oil Field, the largest oil production base in China.

Daqing, in Northeast China's Heilongjiang Province, was a game changer for China, which helped reform the nation, according to Hart Energy, a US-based energy industry publisher.

Although the trade war sounds far away from the lives of workers at Daqing Oil Field, and it was not actively mentioned during the interview, they understand that China's development depends on the experiences they have built up through decades of hard work.

Daqing Oil Field, which gave China oil self-sufficiency, welcomes its 60th birthday this year while the Chinese people are celebrating the 70th anniversary of the founding of the People's Republic of China this year.

"Confronting containment by the US, we should maintain 'Daqing spirit'," Gao Jinying, 74, the seventh leader of the 1205 drilling team, told the Global Times. Gao was an apprentice of Daqing's "Iron Man" Wang Jinxi.

Daqing's hardworking spirit is neither unique nor obsolete, Gao said.

"With hard work and self-reliance, China can certainly fight against the containment just as we won this big oil field," Gao said.

In 1960, China needed more than 10 million tons of crude oil and faced a shortfall of more than half. Even buses were short of fuel, so they carried coal gas bags, and burned alcohol and charcoal.

At the same time, hostile Western forces were waging an economic blockade and trying to choke China using oil as a weapon, according to the Qiushi Journal.

From 1959 to 1961, a great famine swept China, which led to the deaths of tens of thousands of people.

The difficult situation China was confronted with at that time was more severe to the one it faces today. The US is trying to contain China through the trade war.

Daqing Oil Field was established under such hard conditions.

The discovery of the Songji No.3 oil well on September 26, 1959, marked the first step toward establishing the Daqing Oil Field, which smashed the allegation that there is no large-scale oil field in China.

"Iron Man" Wang Jinxi, who was a national model of the working class, was a representative of the older generation of oil workers who fought for the honor of China with their sweat and lives.

Slogans such as "I would give 20 years of my life to try my best to overcome the great oil field!" showed the Daqing spirit of hard work and self-reliance, Gao told the Global Times.

"When I got home and took off my clothes, my cotton-padded jacket could stand on its own like a popsicle," Gao said, adding that "harsh conditions have not weakened our determination to provide oil for our country."

Daqing has produced 2.37 billion tons of crude oil, the largest tertiary oil recovery base in the world, according to Daqing Oil Field Ltd Co (DOLC).

Daqing Oil Field is part of a comprehensive industrial base that China has built up under the spirit of hard work and self-reliance over the past 70 years, and this base is our strength against US containment, Gao said.

Zhang Yin, 35, an oil worker at Daqing Oil Field, told the Global Times that the spirit of hard work and self-reliance still inspires his daily work. He also said that his working conditions improved a lot over the years.

Maintaining the oil pumps, which have been in operation for 20 to 30 years, is his task every day, regardless of the weather.

"Our new generation of oil workers emphasizes high efficiency and low costs during the middle- and late-stages of the oil field. The spirit of independent innovation always inspires us to develop more innovative technology to continue providing oil for our country," Zhang said.

Wu Xiaolin, a first-class oil expert with DOLC, told the Global Times that "Especially under the restraints of the US at present, Daqing is making efforts to achieve the total nationalization of oil extraction technology, just as Huawei is developing the Harmony OS."

"We are developing a new type of surfactant required by alkali-surfactant-polymer flooding. From raw materials and production equipment and technology to final products, the entire process is expected to be completely domestic and does not need to import anything from the US," Wu said.

Xue Mingwu, 30, a technician at Daqing Oil Field, told the Global times that it was difficult to import oil in the old days as Western countries were tightening their technological blockades on China. Only self-reliance can really solve the problem, Xue said.

The US triggered the trade war to curb China, which reminds us to continue to carry forward independently the spirit of innovation, property rights, production, and resolution of internal consumption and external factors of the oil field, Xue said.