Debenhams warns again on outlook as first half profit slumps

British department store group Debenhams (DEB.L) lowered its full-year outlook for the second time in four months and cut its dividend as it reported a 52 percent slump in first-half profit, further hammering its already battered shares. 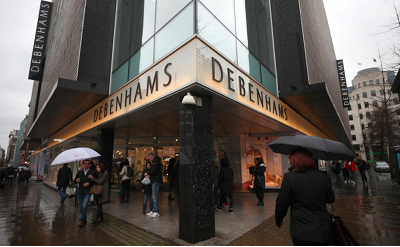 The stock fell as much as 13 percent in early trading on Thursday, taking its year-on-year plunge to 62 percent.

The 240-year old Debenhams, which issued a profit warning in January, also said Matt Smith, its chief financial officer, was quitting the retailer to take up the same role at rival Selfridges.

The group is one year into a turnaround plan led by Chief Executive Sergio Bucher, a former Amazon and Inditex executive.

His programme involves closing some stores and revamping the rest, cutting promotions and improving online service, while seeking efficiencies by simplifying the business.

However, progress has been hampered by changing shopping habits, a squeeze on UK consumers’ budgets, a shift in spending away from fashion towards holidays and entertainment, as well as intense online competition.

“The market has remained very volatile and competitive with consumer confidence and the clothing market continuing to fall,” Bucher told reporters.

“The retail market is changing but this is happening faster than we or anybody expected and therefore we need to accelerate our pace of change,” he said.

Debenhams is not alone in finding the going tough. Already this year Toys R Us UK, electricals group Maplin and drinks wholesaler Conviviality have plunged into administration, while fashion retailer New Look and floor coverings firm Carpetright are closing stores.

Debenhams made an underlying pretax profit of 42.2 million pounds in the 26 weeks to March 3 - below analysts’ average forecast of 44 million pounds and the 87.8 million pounds made in the first half of its 2016-17 year.

The interim dividend was cut by 51 percent to 0.5 pence.

Debenhams said that based on its current view of the second half, pretax profit for the full 2017-18 year was expected to be at the lower end of the current range of analysts’ forecasts of 50-61 million pounds.

“Debenhams is investing just to stand still and is acutely exposed to the ongoing structural challenges in the market,” said analysts at Liberum, who reiterated their “sell” recommendation.