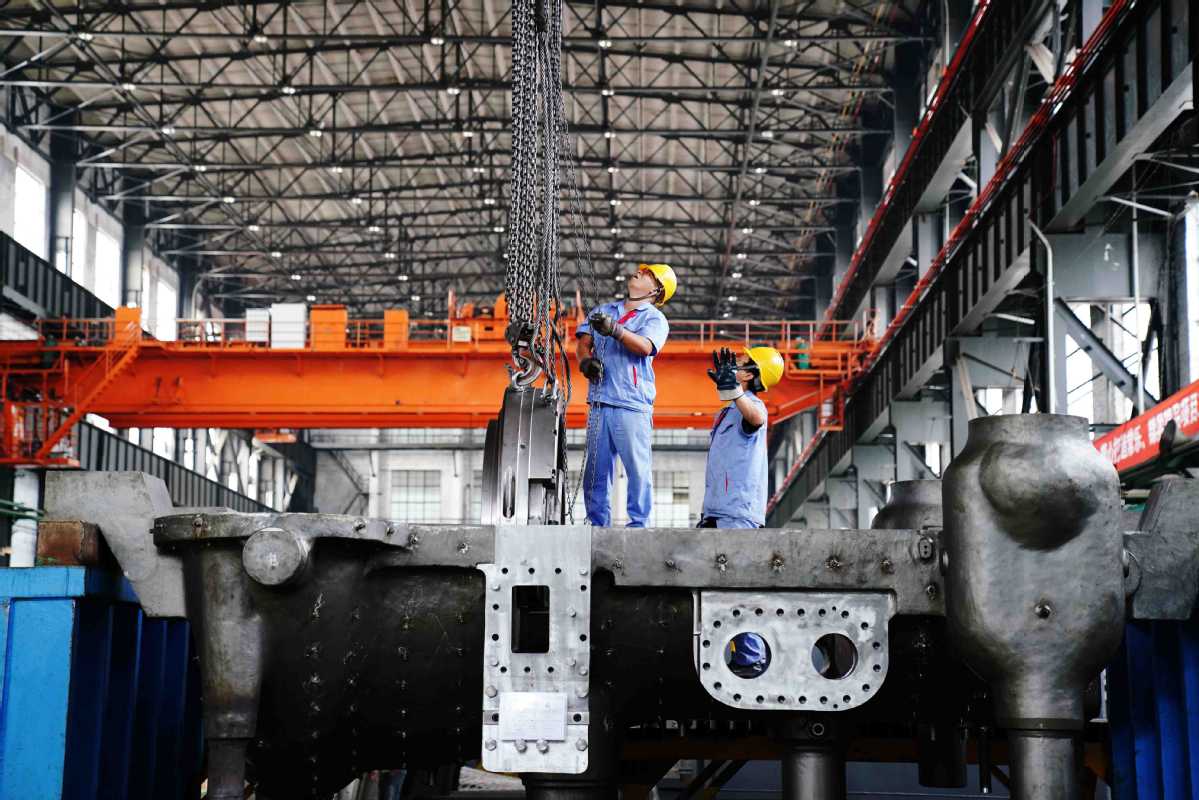 Employees work on the production line of a steam turbine manufacturer in Harbin, capital of Heilongjiang province. (Photo: Xinhua)

State-owned enterprises' debt burden continued to ease in 2018, as SOE reform measures took effect and the authorities stuck to the deleveraging policy to curb debt increases, according to a report from the State Council on Wednesday.

The report showed that the average debt to asset ratio, a key financial gauge to reflect a company's debt risk, declined in central government-owned enterprises, down to 67.7 percent in 2018 from 68.1 percent in 2017.

The ratio for SOEs controlled by local governments remained stable last year, which was unchanged at 62 percent compared with 2017, said the report.

This is the second consecutive year that the State Council reported the financial figures of China's SOEs to the Standing Committee of the National People's Congress.

Enterprises, owned by both the central and local governments, showed an improvement in their leverage level, as policymakers' determination on deleveraging continued to curb SOEs' debt increases, although the slower economic growth is limiting the ability of SOEs to reduce debt further, said analysts.

It proposed to accelerate the elimination of outdated production capacity, and continue to promote the reduction of leverage and debt in SOEs.

China First Heavy Industries Co, one of centrally-administrated SOEs which supplies technical equipment, high-tech products and services to a number of industries such as steel, non-ferrous, electric power, energy and automobiles, encountered financial losses in 2016, saw its net profit jump 165 percent year-on-year in 2018, after steadily deepened supply-side structural reform and adjustment of its operation mode.

Eager to cultivate a number of world-class enterprises, the government has already accelerated the pace of implementing all reform tasks in SOEs to cut backward production capacity and debt ratio, and deepen the mixed-ownership reform, said Li Jin, chief researcher at the China Enterprise Research Institute in Beijing.

"This is why the State-owned Assets Supervision and Administration Commission is cutting the administrative role of SOEs' headquarters to restore their earnings ability rather than rely on monopoly, as well as demerge estate management, and water, power and gas supplying businesses from SOEs," he said.

In September 2018, the State Council published a policy which aims to lower SOEs' average total liabilities to assets ratio by 2 percentage points from year-end 2017 to year-end 2020.

The government's efforts to control debt expansion in SOEs will continually help to prevent financial risks in the sector. "The government will closely monitor the SOEs that breach the leverage alert line and those in a special supervision list and set a definite target and timeline to scale down their leverage," said Hu Kai, a senior vice-president of Moody's, the international ratings agency.

"These SOEs will be prevented from pursuing debt-funded acquisitions, and will have to enhance their risk management and cut costs and expenses," said Hu.