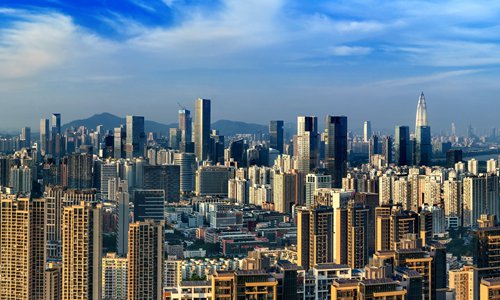 Among more than 8,000 subdistricts in China, the Yuehai Subdistrict located in the southern city of Shenzhen is likely to be at odds with the traditional understanding of what a Chinese subdistrict is.

Like a huge museum of modern architecture, Yuehai, with an area of about 20 square kilometers, houses the headquarters of many tech giants such as ZTE, Tencent and DJI. With such big names, the subdistrict became an overnight sensation during the Sino-US trade frictions.

Boasting almost 1,000 hi-tech enterprises, with over 80 listed companies and nine unicorn firms, Yuehai, which seemed like a quiet backwater in the 1990s, has turned into the most booming Silicon Valley-like community in China, with its per capita GDP hitting $63,200, nearly half that of Silicon Valley.

Yuehai, an epitome of Shenzhen, explains Shenzhen's rapid growth over the decades and mirrors the tech hub's all-round efforts in building itself into "a pilot demonstration area of socialism with Chinese characteristics." This means a national model that combines innovation, business environment, cultural advancement, social welfare and sustainable development, according to a guideline issued in August.

As a slogan in Shenzhen goes, "You are part of Shenzhen once you come here." The city of immigrants is embracing everyone with dreams of this inclusiveness.

After graduating from University College Cork in Ireland, Xing Shi received an offer from a state-owned enterprise in his hometown of Guangxi. But he turned down the offer after he was advised to go to Shenzhen "if you're young and have no family background."

Taking advantage of the complete industrial chain and rich supporting resources in the Pearl River Delta, of which Shenzhen plays a leading role, Orbbec's 3D cameras are widely applied in emerging industries such as smartphones, intelligent robots and logistics. The "Made in China" products have been used and developed by its more than 2,000 customers worldwide, including HP and Ant Financial.

Xing Shi joined the company's R&D team, which makes up 70 percent of its total headcount.

About 500 meters away from Orbbec is located the company Chen Cheng works for -- Shenzhen Aerospace Dongfanghong HIT Satellite, a commercial space company.

Chen, 34, who came from north China's Inner Mongolia, was touched by the Shenzhen slogan and started his aerospace career in Yuehai eight years ago.

"The manufacturing capacity, broad market and preferential policy here provide fertile ground for us to develop commercial micro-nano satellites," said Chen, deputy head of the product center of the company.

"We aim to be a trailblazer in the commercial space industry just like Shenzhen's role in the reform and opening-up," Chen said.

In Shenzhen, one out of every seven residents is an entrepreneur. Yao Minxi, a former Huawei staff, has opened two restaurants in Yuehai, and both are particular hits.

"With many young people and an inclusive entrepreneurial environment, Yuehai helps develop the catering industry. I'm confident in its market potential," Yao said.

Standing up to community issues

Though having grown into a leading high-tech community in marketization, internationalization and the rule of law, Yuehai still faces some problems, which are equally prominent for Shenzhen, a pilot zone with the pursuit of quality development and cosmopolitan status.

When compared with the Silicon Valley, the most obvious "short board" of Yuehai, even of Shenzhen, lies in its original innovation.

"We have to admit that the city has yet to be stronger in basic research," said Wu Sikang, a researcher with the Development Research Center of the Shenzhen government.

As R&D staff, Xing Shi is eager to be integrated more deeply into the global innovation system. "We need more opportunities to communicate and cooperate with world-renowned universities and research institutes," he said.

Given the high housing prices in the community, even the well-paid tech elites find it difficult to own a home in the place where they started to realize their dreams.

Xing Shi goes to work by subway every day, with a one-way trip taking as long as 1.5 hours.

He said half of the commuters are China's internet talent. "With a shorter commute, I could spare more time and energy for research and innovation."

Moreover, the educational and medical resources in the community are not enough. "Hi-tech cities should develop in a balanced way. To attract and retain talent, we should attach importance to people's livelihood," said Hu Huaijiang, with the Shenzhen Municipal Science, Technology and Innovation Commission (STIC).

Community self-governance plays a key role in solving some problems in Yuehai. The Gaoxin Community Workstation in the subdistrict has organized a "property co-governance alliance" with property management companies to improve the business environment.

Last year, the staff of the workstation solved 352 labor disputes on their own. They even held reading parties from time to time to help young talent who have no time or chances to date or make friends.

"These problems seem trivial but relate to people's sense of happiness," said Wang Yongmei, secretary of the Party Committee of the workstation.

Many in Shenzhen dream big. As the guideline says, by the mid-21st century, the city is expected to grow into a world pacesetter with outstanding competitiveness, innovative capacity and influence.

"I hope our products can bring a better experience for global clients and create more value for the society," said Xing Shi. "As long as we work hard, we can make more miracles in this 'wonder city.'"

Shenzhen understands that only with more original innovation it can take a leading role amid international competition. It spends one third of its annual budget on basic research each year.

"We will focus more on the upstream of the innovation chain of the high-tech industry," said Li Xiaoli, head of the policy and regulation division of the Shenzhen municipal STIC.

With three comprehensive national science centers established in Shanghai, Hefei and Beijing, China is supporting Shenzhen, a growth engine for the Guangdong-Hong Kong-Macao Greater Bay Area initiative, to build the fourth. A series of large scientific installations and national and provincial labs have been set up or will settle in the city to enhance its basic research capability.

Peng Cheng Laboratory, which was established in Shenzhen last year, has 18 academics engaged in researching the most cutting-edge tech fields from AI and cyberspace security to quantum computing.

"Our lab aims to attract talent from universities, research institutes and enterprises from at home and abroad to jointly promote scientific and technological innovation," said Zou Peng, executive deputy director of the lab.

In recent years, apart from stepping up the construction of local universities, Shenzhen has cooperated with some prestigious universities such as the University of California, Berkeley and Lomonosov Moscow State University to build world-class universities of its own.

According to the city's preferential policies, high-end global internet talent, new energy and aerospace are eligible to 800,000 to 1.5 million yuan in living allowances and research subsidies and enjoy privileges such as medical insurance, children's education allowance and employment opportunities for spouses.

The city also allows international talent with permanent residence status to start businesses in Shenzhen and ensure that people from Hong Kong and Macao working and living in Shenzhen receive the same treatment as local residents do.

"This will boost Shenzhen to be more open and internationalized, and it's more convenient for me to work here," said Hong Kong entrepreneur Kuo Wai Keung, who founded a startup making smart bags and suitcases in Qianhai -- the Shenzhen-Hong Kong pilot cooperation zone in Shenzhen.

Qianhai, the "special zone in the special zone," piloted a move to reduce the time limit for approval of the establishment of enterprises from one day to less than a minute on September 19.

In Shenzhen, the government prefers to position itself as a government of services rather than management.

Following this administrative concept, the Shenzhen government turned its administrative office buildings in the city's center into the "Civic Center," where all citizens can not only handle almost all the approval business efficiently, but visit museums and have fun.

A total of 1,090 parks have been built in Shenzhen, as an effort to improve the city's ecological environment. According to the data released by the Ministry of Ecology and Environment, Shenzhen ranked fourth among 168 Chinese cities in the first of this year in terms of air quality.

Shenzhen is learning from the first-class metropolises and increasing investment in culture. More museums, galleries and theaters are expected to be built in the city. In 2018, the added value of Shenzhen's cultural and creative industry reached over 260 billion yuan accounting for more than 10 percent of its GDP.

"We hope the citizens will not only be able to afford first-class products, but also enhance their cultural tastes," said Guo Yuehua.

Yao Minxi had no dreams when she first arrived in Shenzhen 10 years ago. "My dream was born in the process of entrepreneurship and with the development of this city," she said.

"I wish I could work until I am 70, when Shenzhen becomes a global benchmark city and my restaurant brands bring Chinese culture to the rest of the world," she said.