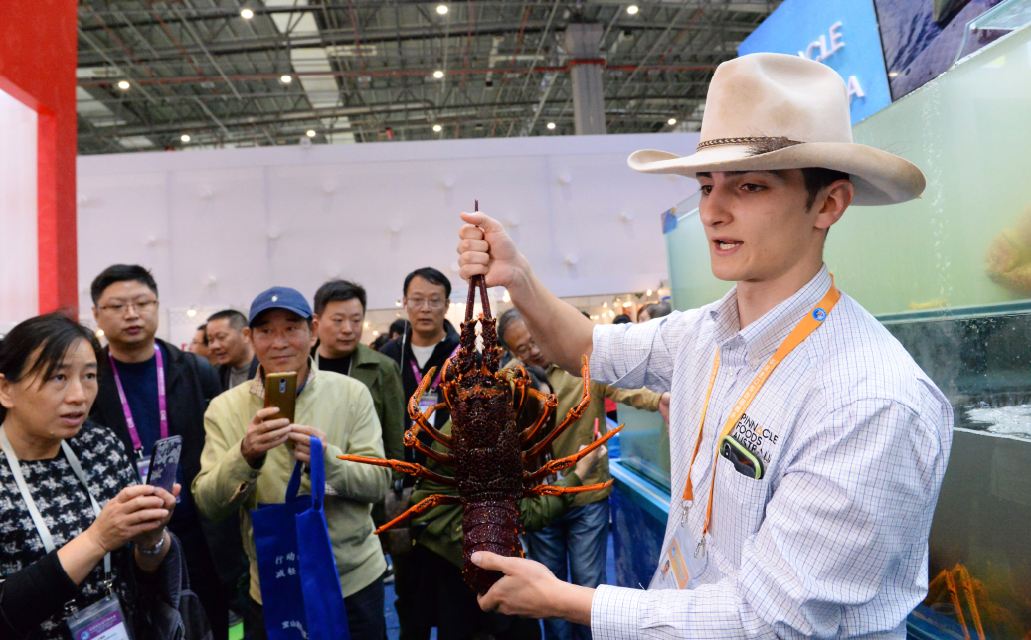 An Australian exhibitor introduces a lobster during an import expo in Shanghai. (Photo: Xinhua)

The nation's import and export volume by the middle of November exceeded last year's total by 15 percent according to China Customs, and experts said the government's continuous efforts to deepen reform and facilitate trade have paid off.

While the detailed data for November has yet to be released, according to figures from the General Administration of Customs, the total import and export volume reached 2.75 trillion yuan ($398 billion) in October, up 22.9 percent year-on-year.

In the first 10 months of 2018, the total trade volume topped 25 trillion yuan, up 11.3 percent year-on-year. A significant increase was seen in the private sector, as the country's private enterprises imported and exported 9.88 trillion-yuan worth of goods in the first 10 months, up 14.6 percent, accounting for 39.4 percent of the nation's total.

Ren Zeping, chief economist of Chinese property developer Evergrande, said continuous opening-up could drive competition, and thus improve the efficiency of domestic companies and financial institutions. The country should also speed up the pace of supply-side structural reform, he said at the 2018 Global Wealth Management Forum in Beijing on Saturday.

Bruno Macaes, Portugal's former Europe minister, said at the forum that trade between China and Europe was one of the most important relationships. Europe-Asia relations need to be repositioned, and the two sides should promote ties to a deeper level and on a broader stage.

He said in the future, Europe and Asia would be the global trade center and the financial market center respectively. China, undoubtedly, would be the center of the Asian continent, he stressed.

Liang Ming, director of the foreign trade institute at the Chinese Academy of International Trade and Economic Cooperation, a think tank of the Ministry of Commerce, said China's trade had achieved an eye-catching performance in the first three quarters.

"There were three reasons for this: the continuous effect of policies to stabilize trade growth, the fact that trade companies that have been increasing their competitive edge, and the complete industrial chain in China," he said.