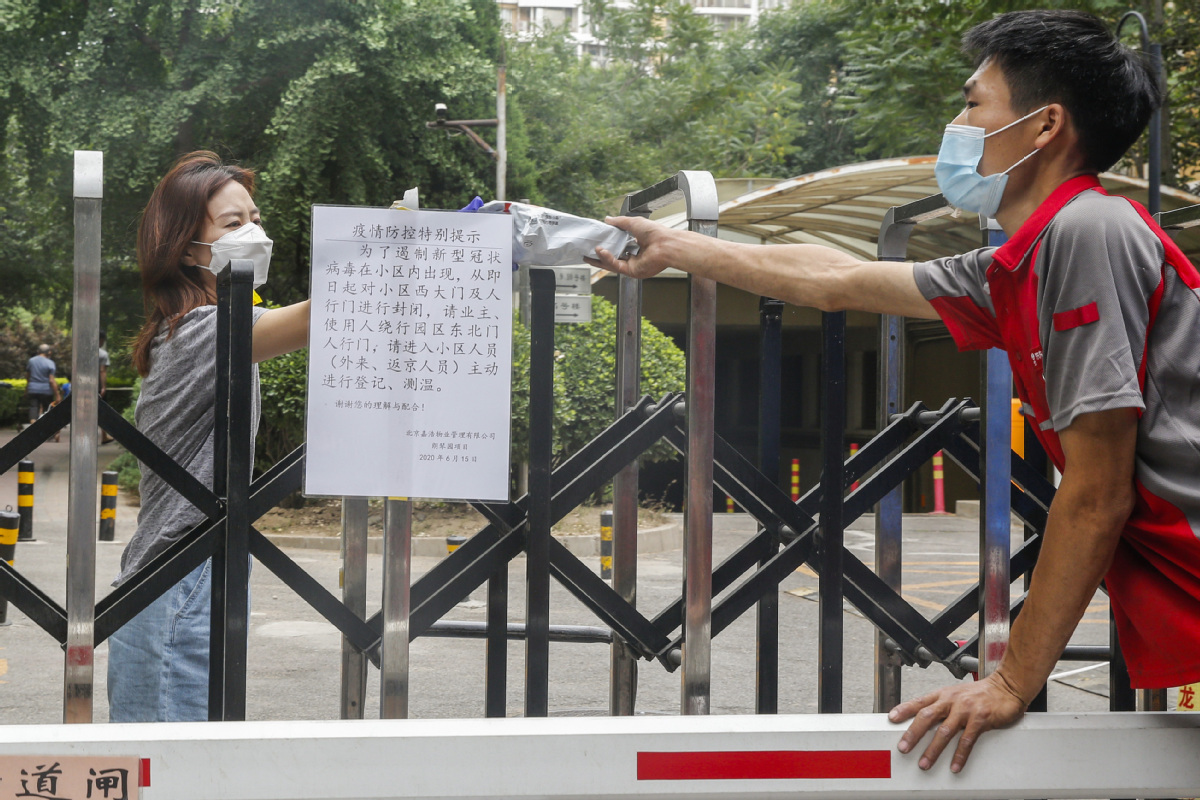 A delivery worker passes a parcel to a woman at the Langqinyuan community in Beijing's Xicheng district on June 17. During the novel coronavirus pandemic, many residents have been relying on delivery services for daily necessities. (Photo: Xinhua)

Wu Xujie, a cinema manager in Yuyao, Zhejiang province, was preparing to welcome many customers during Spring Festival as he decorated the venue, stocked up on food and recruited several college students as part-time staff members.

Then the novel coronavirus outbreak shut down the whole industry and left him sitting at home all day.

"I couldn't get a good night's sleep and usually woke up at midnight," Wu said. "I realized that I shouldn't just wait for the cinema to reopen. I had to make a move."

On April 19, he applied to be a part-time delivery worker.

He made his delivery story into dozens of videos to keep up his spirits and those of his colleagues. Some of the videos attracted tens of thousands of views on Xigua Video, an app for short videos.

In the meantime, as a delivery worker, he's ridden a scooter across the city to deliver goods in the sun and rain. He said he thought he understood the job well, but it turned out to be very different once he took it on.

A part-time delivery worker gets paid for piecework, and Wu earns 18 yuan for every 5 kilometers he travels, with his daily salary ranging from 30 to 80 yuan.

"After earning a living as a rider, I begrudge spending even 2 yuan to buy a bottle of water because one delivery order usually earns me just 4 yuan," he said.

"I'm fined 10 percent of my salary for late deliveries. And on one occasion, when I rushed to deliver food in the rain, I lost control of my scooter and crashed into a pillar."

In the past few months, theaters, gyms, factories and restaurants have been shut down because of the COVID-19 pandemic, putting many people out of work. They had to turn to part-time jobs to get through the hard times.

Being a delivery worker was a popular choice because the demand for delivery services surged as people across the country self-isolated at home.

Since January, the number of people employed by China's delivery industry has grown rapidly. Meituan, an online food delivery platform, says it has recruited about 950,000 new riders since the start of the outbreak.

It said that among the 75,000 new riders who registered to work for the platform between Jan 20 and Feb 23, about 37 percent came from the catering, fitness, hairdressing and other service industries, 27 percent were from manufacturing industries and 14 percent were operators of small businesses.

Wu said that, at first, he felt a little embarrassed when he put on his delivery uniform.

"The security guard at my apartment building would always mistake me for an outsider and stop me from going home," he said.

However, after conquering those feelings, he said he formed good memories of the experience because he discovered a lot of positive energy.

"Restaurant owners would treat me in a friendly way and other deliverymen would stop on their routes and show me the way," he said. "The work has kept me in a better mental and physical state, and I think the job at the cinema will be easier for me now."

As cinemas are unlikely to open soon, he still works part time doing deliveries but is looking forward to the day his cinema reopens.

Shao Junhua, a 26-year-old yoga coach, became a part-time delivery worker in March after her gym in Shanghai shut down due to the outbreak. She earned about 10,000 yuan a month at the gym and now earns about 4,000 yuan a month making deliveries.

She's had four small accidents and was once thrown off her bike, injuring her knees and pelvis. But she said that for the most part, she is enjoying the work.

"When I am riding along the street, I can't help but admire the surroundings we live in," Shao said. "They are so beautiful, which is something I didn't even notice a little before. During the ride, I can forget all the mental pain."

Liu Yuanju, a researcher at the Shanghai Institute of Finance and Law, said such rapid job transitions have been made possible by the rapid development of internet technology.

"For example, people can register online for a part-time job easily and delivery novices can accurately find their way to customers' homes by GPS," he said.

But Wen Xiaoyi, a professor of human resources at China University of Labor Relations, said taking odd jobs like being a food delivery worker is just a way of making money rather than pursuing a career, and the riders will return to their normal jobs as soon as the pandemic dwindles.

"Being a deliveryman doesn't require too many skills or much experience, and this kind of job can be regarded as protection against unemployment," Wen said.