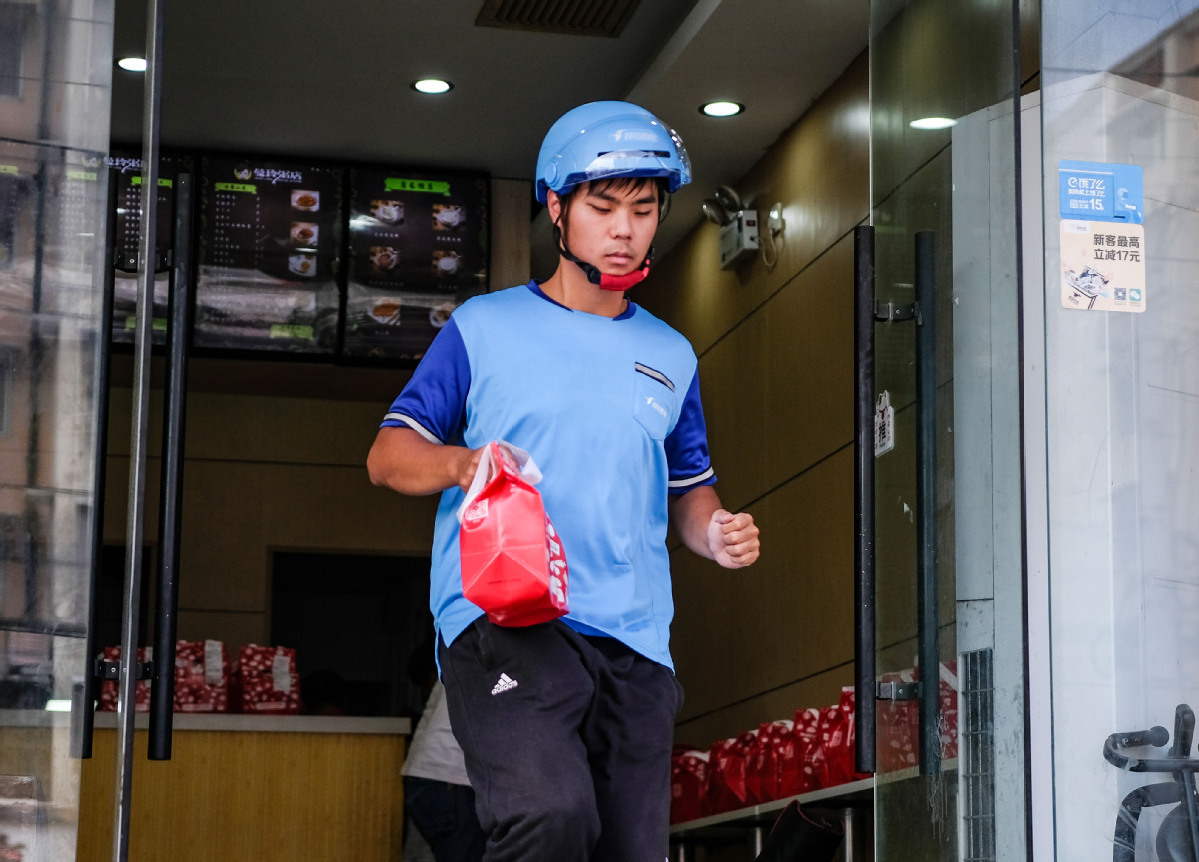 A deliveryman prepares to deliver food from a restaurant in Shanghai. [Photo provided to China Daily]

About 12,000 university students have taken part-time jobs in food delivery services during the COVID-19 outbreak, according to a report jointly released by online catering platform Ele.me and Xinhua.net.

In 2019, the number of newly added delivery staff who were born after 2000 at Ele.me tripled compared with a year earlier, and they are able to earn an extra 3,000 yuan ($428) each month on average, the report said.

Chengdu in Sichuan province, Changsha in Hunan province, and Shanghai are the most popular locations for these young delivery workers.

The report also said nearly 50 percent of the post-2000 generation delivery workers are willing to recommend the job to others, and 40 percent will try other new careers.

Yang Boran, a sophomore majoring in languages at Hankuk University of Foreign Studies in South Korea, chose to become a delivery worker in his hometown of Taiyuan, Shanxi province, as he couldn't return to his university due to the pandemic.

As the world's most populous country, China is aware that its tremendous workforce is one of the most important factors contributing to its unparalleled economic development over the past decades.

The Chinese government therefore attaches great importance to the issue of employment, and takes employment as the first priority in the task of improving people's livelihoods and ensuring societal stability.

They will be concentrated in fields like product technology, merchant services and business operations. The recruitment plan is part of a broader push to drive forward the digitalization of the local services industry.

Furthermore, the company has launched a job-sharing platform to encourage restaurant workers to explore alternative opportunities in jobs like delivery staff during the pandemic.

There were 2.95 million delivery staff at Meituan Dianping at the end of June, an increase of 16.4 percent year-on-year, said a report from Meituan Research Institute.

Nearly 50 percent of the workers, who mostly deliver meals via electric scooters, earned 4,000 yuan to 8,000 yuan each month during the January-June period, the report said. More than half were born in the 1990s, and about 40 percent have other jobs.

A large number of people are willing to work in the delivery sector due to the flexible working hours and guaranteed incomes.

"On-demand food delivery platforms make contributions to increasing employment and retaining current employees in the catering industry, which was hit hard by the novel coronavirus pandemic," said Zhao Ping, director of the international trade research department at the China Council for the Promotion of International Trade.

Zhao said the platforms have also created a string of new jobs and are the driving force for the growth of revenue and profit in the catering industries.

Xue Jun, a professor from the Law School at Peking University, said the platforms have taken a series of measures aimed at helping small business owners overcome the economic impact of the contagion, including offering small low-interest loans and extending discounts to help merchants reduce operational costs.

Zhou Guangsu, an associate professor at the School of Labor and Human Resources at Renmin University of China, said on-demand food delivery services have not only stimulated growth of consumption, but also promoted the upgrade of consumption and injected new vitality into the economy while boosting employment.

He added that the new jobs that have emerged, including delivery workers, internet product promoters and support staff, are all examples of how the platform economy has improved the size and quality of the job market.