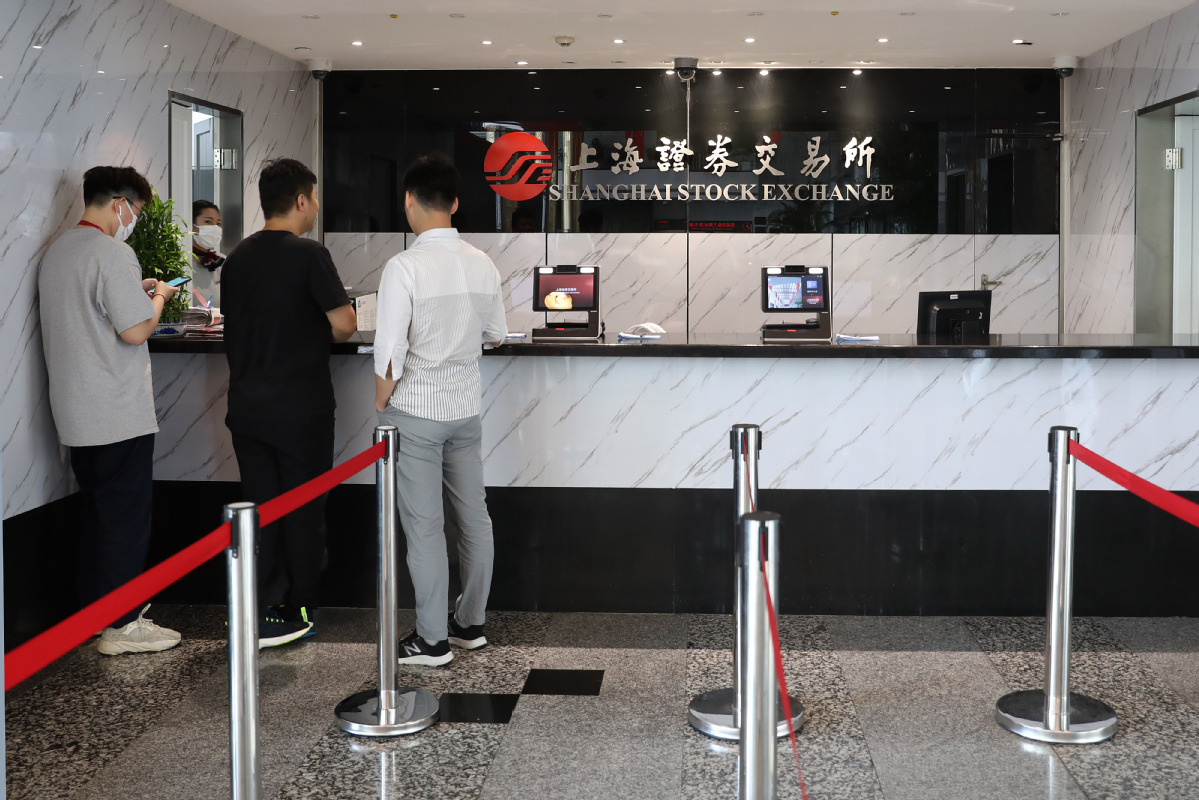 Investors gather at a counter of the Shanghai Stock Exchange in Shanghai in July. (Photo provided to China Daily)

Despite lingering geopolitical conflicts and tightening credit environments elsewhere in the world, initial public offerings remain active in the first half of the year in China thanks to deepening capital market reform, according to a report released by professional services provider Deloitte on Wednesday.

Up to 68 companies will have debuted on the Shanghai Stock Exchange from the beginning of the year to the end of June, with total financing coming to 208.7 billion yuan ($31.1 billion). The Shanghai bourse will be the largest fundraising venue globally in the period if measured by IPO financing value, said Deloitte.

Shenzhen is second only to Shanghai globally in terms of total IPO proceeds, as 81 companies will have raised 99.4 billion yuan during the first six months.

The seven-month-old Beijing Stock Exchange, which is positioned as a cradle for technologically advanced small and medium-sized enterprises, will have registered 19 IPOs of 2.8 billion yuan in financing as of the end of June.

In other words, a total of 168 companies will have successfully floated on the A-share market when June wraps up. Although the number of IPOs will be down by 31 percent year-on-year, the total financing will jump 49 percent on a yearly basis to 310.9 billion yuan, thanks to the colossal IPOs of China Mobile in early January and CNOOC Ltd in late April.

Dick Kay, offering services leader of the capital market services group at Deloitte China, considers the A-share IPO activity "remarkable results from red chip listing reform and the registration-based regime".The vitality is especially noticeable despite the negative market sentiment due to the Russia-Ukraine conflict, US interest rate hikes and tapering, he said.

Looking forward, up to 160 companies may debut on the technology-heavy STAR Market on the Shanghai bourse this year, raising nearly 260 billion yuan. The ChiNext in Shenzhen, Guangdong province, which aims to nurture integration between traditional industries and new business models, is likely to receive 210 IPOs, with total proceeds coming to 215 billion yuan. The BSE will register 80 new flotations with the total financing reaching 15 billion yuan.

The A-share IPO activity may pick up momentum in the second half of the year following the continuous reform of the registration-based IPO mechanism, said Stephen Hu, audit and assurance partner of Deloitte China.

The China Securities Regulatory Commission, the country's top securities watchdog, said at the end of last year that the proliferation of a registration-based IPO mechanism throughout the A-share market will be a focus in 2022. At present, the mechanism is adopted at the STAR Market, ChiNext and the BSE.

On the other hand, only three Chinese companies completed their IPOs on the US stock market in the first half of the year, down 92 percent year-on-year. As Deloitte experts explained, this is largely due to the fact that nearly half of the Chinese companies currently trading on US bourses are included in the provisional or conclusive list under the Holding Foreign Companies Accountable Act, indicating the likelihood of removal from the US stock market.

According to Alvin Tse, offering leader of the capital market services group at Deloitte China for the Hong Kong eastern region, the outlook for Chinese companies listing in the US will remain uncertain in the following months unless an agreement is reached regarding cross-border audit oversight.

However, this will provide support for Hong Kong's IPO market, said Tse. Based on the valuation of American Depository Receipts of these US-listed companies, many of them will explore different listing options in Hong Kong, including dual-primary listing, secondary listing or introductory listing. Some companies may delist from the US first and seek re-listing in Hong Kong through acquisition by a special purpose acquisition company, he added