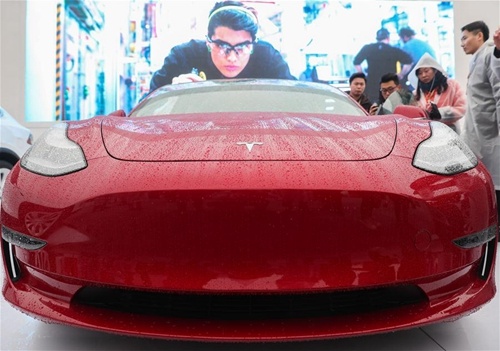 A Tesla Model 3 is displayed at the groundbreaking ceremony of Tesla Shanghai Gigafactory in Shanghai, east China, Jan. 7, 2019. (Photo: Xinhua)

Demand for new-energy vehicles (NEVs) has increased in Shanghai following the city’s expansion of restrictions for non-local plates since Saturday, said NEV sales staff reached by the Global Times on Tuesday.

The number of people who have been asking about the NEV cars, which are not subject to the license plate restrictions, has increased after the city issued an updated policy for non-local plates, a salesperson from a Tesla store in Shanghai, who didn’t give his name, said on Tuesday. A source close to Chinese EV manufacturer NIO also confirmed with the Global Times on Tuesday that they have seen a rise in orders.

Under the updated policy issued by the Shanghai authorities on Saturday, cars with non-Shanghai plates will not be able to run on some elevated roads in the city from 7 am to 8 pm on workdays starting from November 2.

Sales of NEVs soared following Shanghai’s updated policy for non-local plates, according to a report by 21jingji.com on Tuesday. A single Tesla store sold around 80 vehicles in the morning of October 25, while the store normally sells around 10 to 20 vehicles per day, said the report.

"I’m thinking of buying an NEV as it’s more environmentally friendly and my non-local plate car can’t run on some roads at certain times,” a resident living in Shanghai surnamed Wan told the Global Times on Tuesday.

The country is making efforts to boost NEV development. US carmaker Tesla’s Shanghai plant has produced around 85,000 NEV cars as of September, and it has even started to export made-in-China Model 3 vehicles to Europe for the first time.

Also, SAIC Volkswagen’s first electric compact sport-utility vehicle, known as the ID.4 X, was officially put into batch production at the company’s Shanghai EV-focused plant, which has involved a total investment of over 17 billion yuan ($2.53 billion), according to a press release the company sent to the Global Times on Tuesday.

Despite the impact of the COVID-19 epidemic, China’s NEV sales are recovering gradually. China’s NEV sales in September almost doubled from a year earlier, according to a report released by the China Passenger Car Association (CPCA) in early October. SAIC-GM-Wuling Automobile ranked first with sales of 24,386 units, followed by BYD with 19,048 and Tesla at 11,329, according to the CPCA.

Also, China is strengthening support policies for NEVs in public transportation. From 2021, among the newly added or updated public transportation vehicles, as well as rental vehicles in the country’s ecological civilization pilot zones and some key regions to prevent air pollution, NEVs will account for at least 80 percent.