Wearing hanfu, the traditional clothing of the Han ethnic group, is no longer a fashion trend among China's young generation. 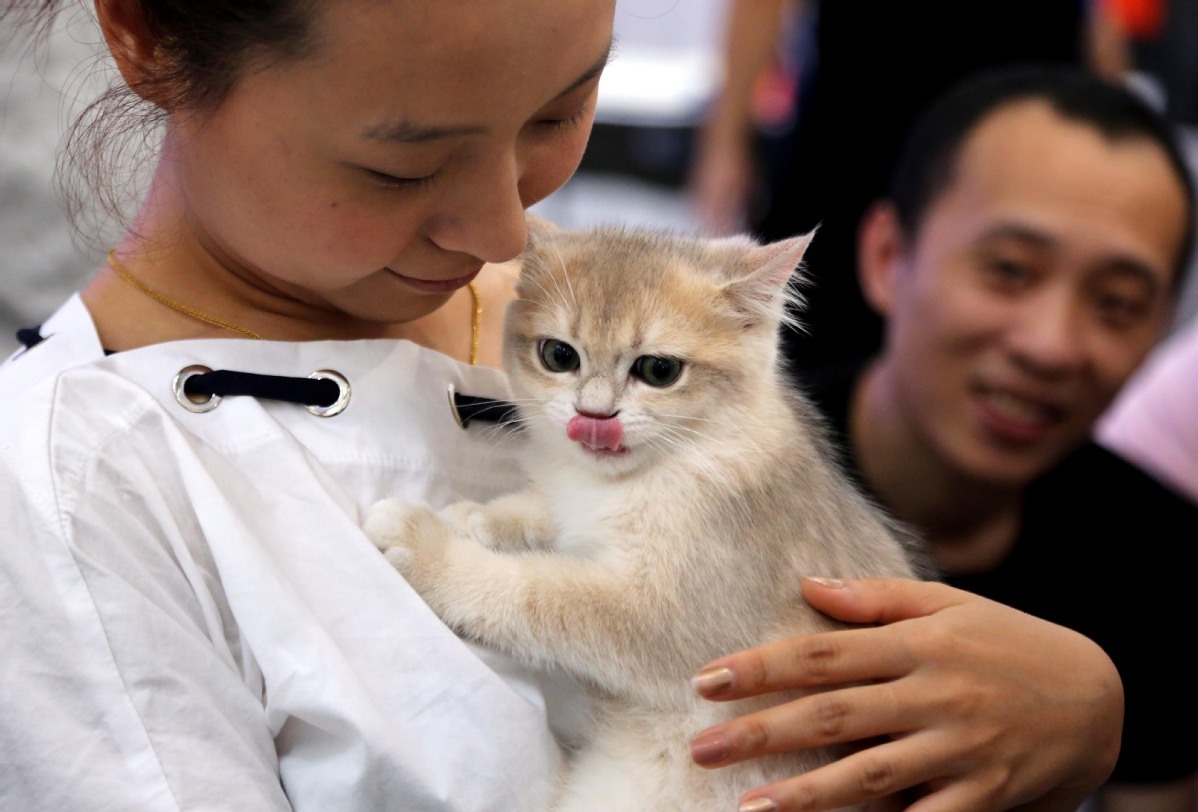 An attendee brings her cat to a pet exhibition in Shenyang, capital of Liaoning province. (Photo: China Daily)

Today, buying hanfu for their pet cats is increasingly popular as a growing number of millennials largely born in the 1980s and 1990s have started to raise cats in their homes.

A recent report by Alibaba's e-commerce platform Taobao said sales of hanfu for cats jumped tenfold in early December from the year earlier.

Taobao noted in the report that almost half of the pet owners in cities are those born in the 1990s, and they usually take their responsibilities as pet parents very seriously.

"I love my cat so much, and it has become a full-fledged member of my family," said 28-year-old Cathy Liu, who lives in Beijing. "I just want to do my best to provide it a high-quality life."

Liu has spent more than 6,000 yuan ($860) on her cat in the past six months. Pet food gets the lion's share of this spending, or about 300 yuan per month. Other expenses include medicines, snacks, toys, vaccines, a cat climber and a bed.

"My cat provides me companionship and teaches me responsibility," Liu said. "My cat takes up most of my spare time. In fact, I would rather snuggle up with it than people around me. And I will suffer anxiety when separated from my pet. Once I have to leave for holiday travels or business trips, I need to watch it and even talk to it via pet cameras every day."

She's not alone. A growing number of young people in China are spending their time and money on raising cats. They are willing to purchase high-quality items for their precious pets.

By the end of 2018, there were approximately 67 million pet cats in China, a report by consulting firm Frost & Sullivan said. It noted that the love for cats by Chinese consumers has created a market worth 60.2 billion yuan in 2018.

The annual average spending on each pet cat was 3,117 yuan. Of that amount, the largest share is 1,340 yuan on average which was spent on food.

Peng Kunyi, a researcher at Qianzhan Industry Research Institute, noted that cat-owning households are becoming more willing to pay for their cats, leading to greater prosperity in the cat economy.

"China has witnessed a significant surge in the number of pet cat owners," Peng said.

"The country has a unique family structure, namely the elderly, office workers and the only children. For the elderly, raising pet cats is playing a key role in easing their loneliness and enriching their spiritual life. And raising cats also can teach the only children responsibility. For office workers leading fast-paced lives, pet cats can provide companionship and help relieve stress."

The report said young people born in the 1990s, especially those who live alone, are now the core group of pet owners.

"Those young working groups lack time and energy to walk the dogs. Many of them love cats for their independence. Compared with dogs, cats don't take up space and is not time consuming," the report noted.

Cat owners are mainly young females who are more likely to purchase some expensive high-quality items for their pet cats, the report added.

JD said that high-end and high-tech pet products were very popular during the recent Singles Day shopping event in 2019.

"Currently, China is still at the very early development stage of a cat economy," Peng added. "More efforts are needed to tackle problems, such as expensive medical bills and low-end food processing."