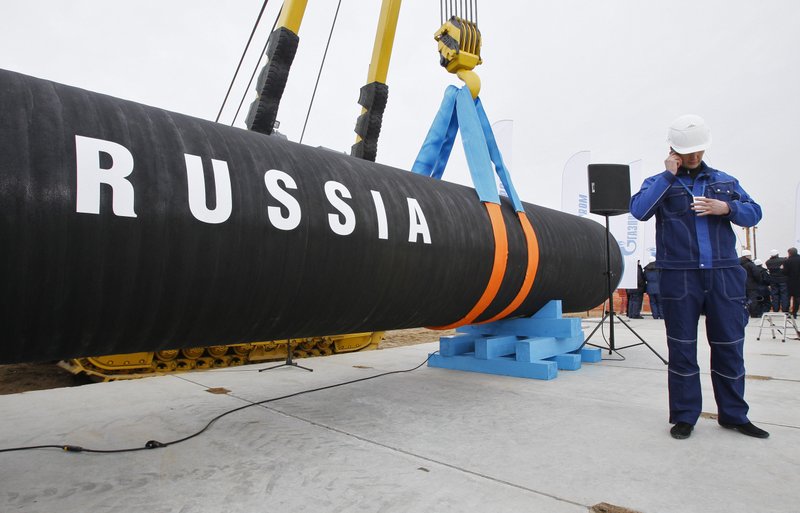 In this Friday, April 9, 2010 file photo a Russian construction worker speaks on a mobile phone in Portovaya Bay some 170 kms (106 miles) north-west from St. Petersburg, Russia, during a ceremony marking the start of Nord Stream pipeline construction. (Photo: AP)

Denmark said Wednesday it is giving permission for a joint German-Russian underwater gas pipeline to be laid to through its territory, in a blow to the United States, which had fiercely opposed the project.

The decision by the Danish Energy Agency to approve the Nord Stream 2 pipeline’s route is a victory for the governments of Russia and Germany, which had staunchly supported it.

The plan to transport natural gas about 1,200-kilometers (746-miles) through the Baltic Sea from Russia to Europe has come under fire from US President Donald Trump’s administration and several European countries, who argue it could increase Europe’s dependence on Russia for energy.

The Danish government agency said it had granted a permit “to construct a section of the Nord Stream 2 natural gas pipelines on the Danish continental shelf southeast of Bornholm in the Baltic Sea.”

“We are pleased to have obtained Denmark’s consent,” said Samira Kiefer Andersson, a representative for Nord Stream 2 AG, the company that manages the project. “We will continue the constructive cooperation with Danish authorities to complete the construction of the pipeline.”

She said preparatory work and the pipelay will start in the coming weeks.

The US government, which wants to sell its liquefied natural gas to Europe, has threatened sanctions against companies involved in the undersea pipeline.

In Russia, Konstantin Kosachev, head of the foreign affairs committee in the upper house of the Russian parliament, noted that the permission was issued despite the “powerful pressure” of the project’s foes “from Ukraine to Poland to America.”

A refusal to allow the pipeline’s construction would have “inflicted serious losses to European companies without any real reason,” Kosachev wrote on Facebook. “It looks like the project could be completed within months.”

While the pipeline is wholly owned by Russian gas giant Gazprom, half of the project’s 8 billion-euro ($8.9 billion) cost is covered by five European energy and chemicals companies including Shell, BASF and ENGIE.

Germany, Europe’s biggest economy and the world’s biggest importer of natural gas, already relies heavily on Russian gas. So far, Chancellor Angela Merkel has deftly kept the pipeline off the table while imposing sanctions against Russia for its actions in Ukraine.

Seibert noted that Merkel discussed the issue with Russian President Vladimir Putin two days ago, and said Germany continues to support three-way talks between Russia, Ukraine and the European Commission on gas transit.

In Denmark, a left-wing party that supports the minority Social Democratic Party government said the decision was “disastrous for the climate and the European energy policy.”

“In light of the climate crisis, Nord Stream 2 is a blatantly stupid decision,” said Mai Villadsen, a member of the Red-Green Alliance. “It makes no sense to approve a huge new gas pipeline without assessing the consequences for the climate.”

The Nord Stream 2 pipeline starts in Russia and passes through Finnish, Swedish, Danish and German marine areas before going ashore at the German coast. It can transport 55 billion cubic meters of natural gas per year.