BUSINESS Derided by critics, trickle-down economics gets another try

Derided by critics, trickle-down economics gets another try 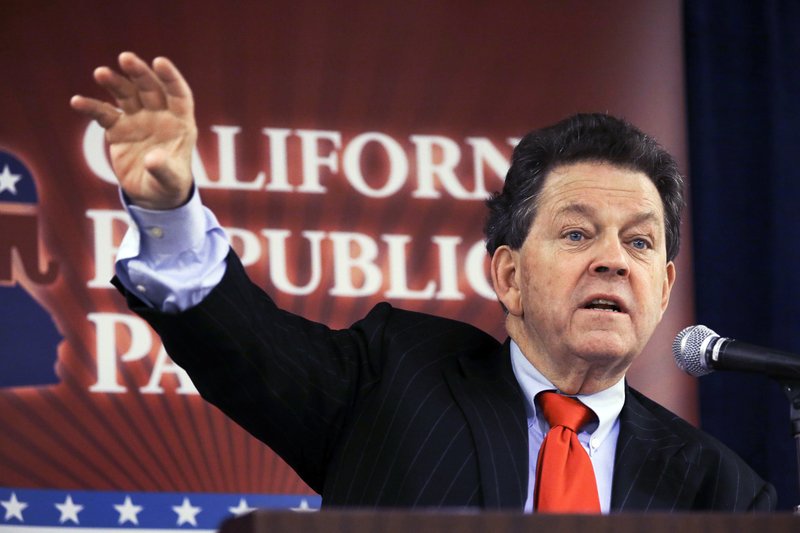 Economist Arthur Laffer, known as the "father of supply-sde economics" and who was an economic advisor to President Ronald Reagan, speaks to an executive committe meeting of the California Republican Party at their convention in Anaheim, California on October 4, 2013 (Photo - AP - Reed Saxon).

In their drive to cut taxes, President Donald Trump and congressional Republicans are betting it does.

Behind their legislation is a theory long popular among conservatives: Slash taxes for corporations and rich people, who will then hire, invest and profit — and cause money to trickle into the pockets of ordinary Americans. The White House says the plan’s corporate tax cut alone would eventually raise average household incomes by $4,000 a year.

The tax plan’s “trickle-down” approach was popularized in the 1980s during the Reagan administration, though it dates back at least to a 1932 wisecrack by Will Rogers. And history shows it has a spotty record of delivering on its promises.

The Republicans’ latest version of the approach edged closer to the finish line Thursday when the House passed its form of the bill; the Senate is working on its own. Republicans hope to send final legislation to Trump by Christmas, though it’s unclear whether they can succeed by then.

Among the key planks in their legislation: Shrink the corporate tax rate to 20 percent from 35 percent. End or ease the inheritance tax on the wealthiest estates. Cut taxes on business partnerships. Offer a temporary tax cut on corporate profits held abroad. Repeal the alternative minimum tax on very high earners. And reduce personal income tax rates for many.

The nonpartisan Tax Policy Center has found that the House tax plan would deliver an average tax cut of $360 for middle-income taxpayers in 2027. A far more generous bounty would go to the highest-earning 1 percent: An average tax cut of $62,000. For the top 0.1 percent, the gain would average $321,000.

And the income tax cuts for individuals would expire within the next decade. By contrast, Republican lawmakers say the tax cuts for corporations need to be permanent. The tax cuts would also add roughly $1.5 trillion to the federal debt.

Republicans argue that the corporate tax cuts, in particular, would unleash a boom that would speed annual economic growth to at least 3 percent consistently from the so-so 2 percent performance of recent years.

The thinking is that reducing corporate taxes would raise companies’ after-tax profits, thereby encouraging them to invest more. Investments in machines and technology would make employees more productive and empower them to command higher pay. The White House’s own study estimates that the corporate tax cut would eventually swell average U.S. household income by $4,000 a year.

Laffer occupies a position of prominence in the history of trickle-down economics. In 1974, he famously sketched a diagram on a restaurant napkin to illustrate his belief that the government could cut taxes and, contrary to economic assumptions, end up producing more revenue, not less. Economic growth would accelerate, and income would slosh downhill from corporations and the wealthy to ordinary Americans.

Over the years, the concept — also known as supply-side economics — has frequently drawn ridicule.

“Voodoo economics” was the derisive term George H.W. Bush applied to it in his failed 1980 bid for the Republican presidential nomination against Ronald Reagan, a supply-side enthusiast.

The liberal economist John Kenneth Galbraith in 1982 likened the trickle-down idea to horse manure: “If you feed the horse enough oats, some will pass through to the road for the sparrows.”

Will Rogers may deserve credit for coining the term in ridiculing President Herbert Hoover’s efforts to combat the Great Depression.

“The money was all appropriated for the top in the hopes that it would trickle down to the needy,” Rogers wrote in his syndicated column in 1932. In fact, Rogers argued, money tends to trickle up — from the hands of the poor into the hands of the rich.

In the view of Carl Davis, research director at the left-leaning Institute on Taxation and Economic Policy, the track record for supply-side economics “is not particularly inspiring.”

In 1981, in the midst of a deep recession, President Reagan pushed through an aggressive tax cut. The economy did rebound strongly over the next few year. But economists have long given credit mainly to the Federal Reserve, which aggressively slashed interest rates.

Bruce Bartlett, a former aide to tax-cut advocate Rep. Jack Kemp, says the ’81 tax cut made sense: The top individual tax rate was 70 percent — far above the current 39.6 percent — and the economy, unlike the relatively healthy one today, had endured a long era of stagnation.

But Bartlett, an official in the Reagan and George H.W. Bush administrations, has lost faith in tax cuts. In 1986, he notes, the United States slashed the corporate tax rate from 46 percent to 34 percent. Yet wages fell. Likewise, President George W. Bush’s tax cuts in 2001 and 2003 produced one of the weakest economic expansions in American history: The Bush tax cuts were still in place when the economy sank into the Great Recession of 2007-2009.

And Kansas has just finished a failed experiment in tax cutting. After Gov. Sam Brownback pushed through big tax cuts in 2012 and 2013, the payoff was underwhelming at best: Tax collections fell shy of expectations, triggering a budget crisis. In June, Kansas passed a big tax increase (over Brownback’s veto), leading Moody’s Investors Services to upgrade the outlook for the state’s credit rating.

Owen Zidar, an economist at the University of Chicago’s outlook for Booth School of Business, says his own research suggests that tax cuts are more effective when they target lower-income taxpayers, who are likelier than the rich to spend a tax-cut windfall.

In addition, Bartlett and other critics say, now is an especially inauspicious time for sharp tax cuts. The economy is enjoying the third-longest economic expansion on record and doesn’t need much help. Unemployment, at 4.1 percent, is extremely low, and many employers are already struggling to fill job openings. In a healthy economy, sharp tax cuts can also raise the risk of high inflation.

What’s more, corporations are recording healthy profits, enjoying low borrowing rates and sitting on a record $2.3 trillion in cash. If they want to make investments, most already can.

At a meeting of The Wall Street Journal’s CEO Council this week, the moderator asked participating executives whether their companies would increase investment if the Republican tax plan became law. Few raised their hands — to the surprise and seeming consternation of Gary Cohn, Trump’s top economic adviser, who was in attendance.

“Why aren’t the other hands up?” Cohn asked.