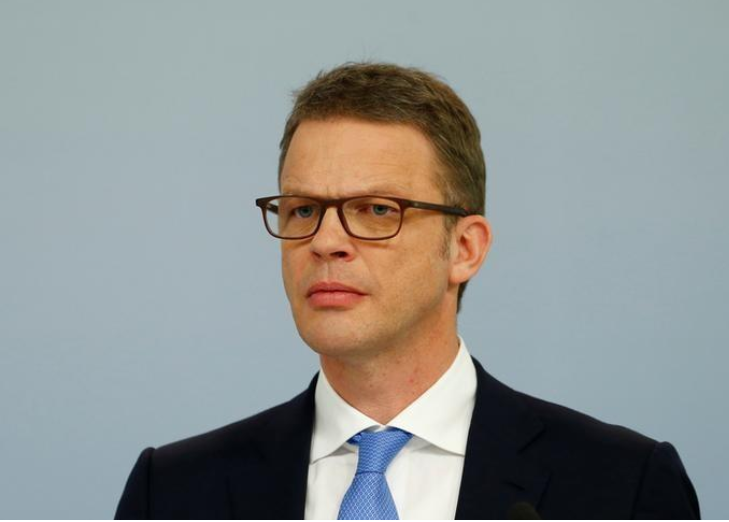 Christian Sewing, member of the board of Germany's Deutsche Bank is pictured in Frankfurt, Germany, February 2, 2018 (Photo: Reuters)

Sewing, a German national, would replace Cryan, a Briton, at a time when the bank is trying to strengthen its brand in its home market. Cryan has been in office less than three years but investors have lost faith that he can return the bank to profitability after three consecutive years of losses.

The promotion of Sewing, 47, with a background in retail banking, auditing and risk, comes as Deutsche Bank and its major shareholders debate the path forward for the investment banking unit where revenues have slowed and key staff defected.

His appointment could signal a shift in emphasis away from Deutsche Bank’s strategy of seeking profit growth through the investment bank and giving investment bankers greater influence.

Sewing tops a list of candidates as the preferred option to be presented by Chairman Paul Achleitner at a hastily arranged board call for Sunday evening, the people familiar with the matter said. A second external candidate is also being proposed though that person’s chances for the top spot are slim, the second person said.

Sewing would assume the helm at the company’s annual general meeting in May, German magazine Der Spiegel said on its website. Der Spiegel was first to report on Sunday that Sewing would likely become the bank’s next CEO.

Deutsche Bank said late on Saturday that the board would discuss the CEO position and make a decision.

A spokeswoman for Deutsche Bank declined to comment on Sunday.

In picking up the baton, Sewing would also face challenges including further cost cutting, intense competition at home and abroad, and increased regulation.

Sewing, a member of the management board since 2015, currently oversees the bank’s private and commercial bank division, which includes the Postbank retail banking unit.

He joined Deutsche Bank in 1989 and has worked in Frankfurt, London, Singapore, Tokyo and Toronto, according to the bank’s website.

“Our view is that Sewing seems to be an OK candidate,” said a major investor who spoke on condition of anonymity.

Sewing’s appointment would be a blow to Schenck, a former Goldman Sachs (GS.N) investment banker long considered a future CEO at Deutsche.

Schenck had signaled he was looking for opportunities outside the bank. Garth Ritchie would stay on as sole head of the investment bank, said the first person familiar with the matter. There is still internal debate on the outcome, said the second person.

Achleitner had begun a search last month to replace Cryan following a flurry of negative headlines after the bank reported a third consecutive annual loss.

Cryan has said he is “absolutely committed” to the bank. But Achleitner has remained silent, to the disappointment of major investors seeking clarity. Sunday’s board call is intended to provide that clarity.

The leadership debate also parallels concern about the direction of Deutsche’s investment bank, whose swift expansion in the years leading up to the financial crisis is blamed for many of the bank’s current woes.

The bank is conducting a global review of the investment bank, known internally as Project Colombo, a person with direct knowledge of the matter has said.

“It looks like the board of directors is capitulating on the investment banking front,” Marenzi said.

Cryan, the son of a jazz musician, married into the wealthy Du Pont family of the United States. He took charge at Deutsche in 2015 to overhaul the bank after years of rapid growth under investment bankers.

But his tumultuous tenure as CEO highlights many of the bank’s underlying issues.

Early on, Cryan quickly announced thousands of job cuts to trim costs but reversed the bank’s plans to sell its Postbank retail business after tepid interest from buyers.

Some of Germany’s most senior politicians criticized Cryan for paying 2.3 billion euros ($2.8 billion) in staff bonuses, four times higher than the previous year, after the bank had made losses in 2017.

The bank’s chief operating officer Kim Hammonds, told a colleagues recently that the bank was “the most dysfunctional company” she had ever worked for, according to a person with direct knowledge of the matter.

Over the past weeks, a number of names have surfaced as possible replacements for Cryan. But some analysts wonder whether anyone will be able to do a better job on turning the bank around.

“There has been actually a disciplined execution in a tough environment by this team,” said Peter Nerby, who analyses the bank for Moody’s. “I wonder if anyone really has a better way to get there. It’s not obvious to me what that way would be.”