Deutsche Boerse chair Faber stands for reelection amid board revamp 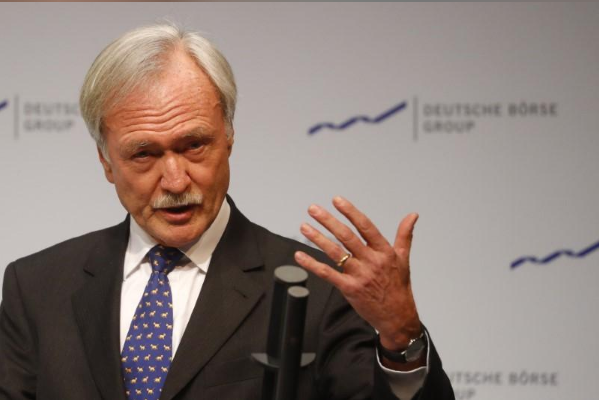 Chairman of the supervisory board of Deutsche Boerse AG Joachim Faber delivers a speech at the New Year reception of the German stock market in Eschborn near Frankfurt, Germany January 22, 2018.(Photo:Reuters)

Deutsche Boerse’s chairman Joachim Faber will seek to stay on for another term, the German exchange operator said on Friday, as it announced a revamp of its board of directors.

Deutsche Boerse said a larger board would help it deal with increased demands, growth, greater diversity and a more global operation.

Faber’s position as chair had been uncertain after a management reshuffle that followed the resignation last year of former chief executive, Carsten Kengeter, amid allegations of insider trading. Kengeter and the firm denied any wrongdoing.

The board nominated three new shareholder representatives to be ratified at an annual general meeting in May to assume the seats of retiring members.

“The three candidates are a great enrichment to the supervisory board,” Faber said. “They will contribute long-standing international expertise and extensive professional knowledge.”

The election process is ongoing for employee representatives of board.