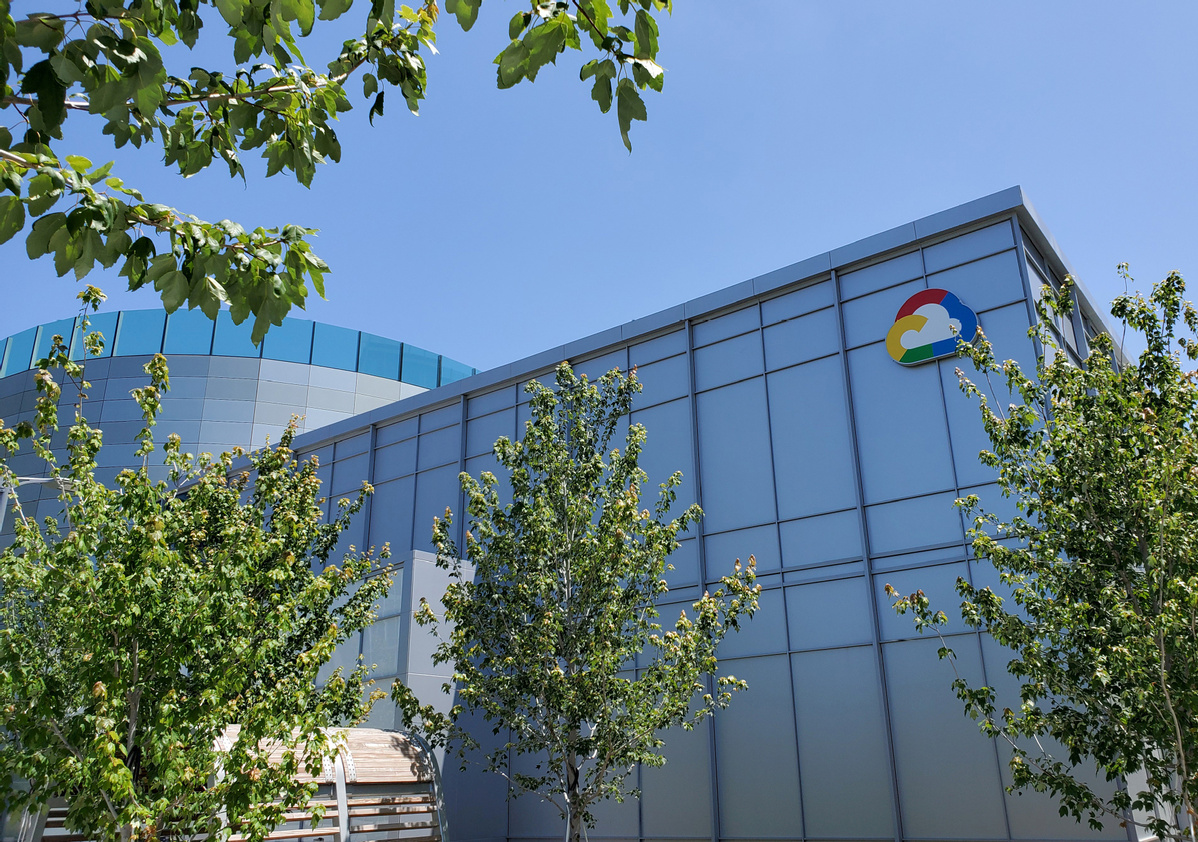 A Google Cloud logo outside of the Google Cloud computing unit's headquarters at the Moffett Place office complex in Sunnyvale, California, US, June 19, 2019. [Photo/Agencies]

Even as tech companies embrace remote working in response to the COVID-19 pandemic, real estate developers are positive that offices will still be people's preferred place to work post-pandemic.

Many Silicon Valley companies find they have easily adapted to stay-at-home orders thanks to technology that help workers meet and collaborate virtually.

Employees at Facebook, Google and Twitter can work from home for the foreseeable future, the companies have said. Facebook has said half its employees could work from home full time within five to 10 years.

Twitter said many of its employees can work from home on a permanent basis. In some new job listings, companies are offering the option of working remotely full time anywhere in the US.

The tech giants' plans for more remote work are reflected in a survey conducted by the Bay Area Council of more than 100 CEOs and other top executives in the region.

The survey found that those executives cumulatively expect only 70 percent of their workers to go back to the office when the economy is completely reopened.

"I think working from home is more productive. It usually took one day to convene a meeting before, but now it takes only one hour to convene a virtual meeting since everybody is home," said Jennifer Hao, an engineer living in Cupertino, California. "And I can save the commuting time."

But remote work does not suit everyone, especially those who have trouble focusing while working at home, and those relying on collaboration in creative jobs, said Goodwin Gaw, chairman of Gaw Capital Partners, a real estate company headquartered in Hong Kong.

"If you do believe everyone is going to move to the suburbs with big homes, then work-at-home is quite comfortable," Gaw said during a recent webinar organized by the Asia Society Southern California.

But for those whose homes are too small or for couples with young children, working at home can be tough, he said.

"I believe humans are social animals," Gaw added. "Collaboration creates energy that induces creativity to allow people to share ideas to innovate. People want to be together."

Gaw said he went into the real estate business in the 1990s, buying up empty office buildings in urban cores like Los Angeles, San Francisco and New York.

All the amenities of urban cores are still there to attract people, especially the younger generation who continue to like music, sports, restaurants, bars and all the other elements that go into socializing and generating ideas and innovation, said Gaw.

"Many tenants of our office buildings in downtown Los Angeles are asking when we will be open," he said. "My staff also asked if they can go back to the office, because they want to work in the office rather than at home to deal with a distraction."

The US Workplace Survey 2020, conducted by the Gensler Research Institute, found that the office is still people's preferred place to work as compared to home, a co-working space or a coffee shop.

The survey also shows a 25 percent increase in urban premium Class A office rents in the US from 2010 to 2019.

She echoed Gaw's remarks, saying that there has been tremendous growth in urban living — transit-oriented living — especially among younger millennial professionals, many of whom are already capable of working from home.

"Even as people are sparking all these fears of companies contracting because more people are going to work from home, which is likely true to a certain extent," said Lee, "we've heard from most of our tenants that they find true productivity in their office space collaborating with their co-workers."

In the near term, the sector's reaction has seemed to be one of hesitancy as opposed to gloom and doom, while in the long term, the changes to workplaces will not be wholly permanent, especially in Los Angeles, she said.

"I still believe that young people are used to living in dense areas and will still need to be where the jobs are," Lee said. "And there'll also be a slight move to slightly less dense uses of office space, so that square footage per employee that has crunched down so tightly over the last several years will loosen up."