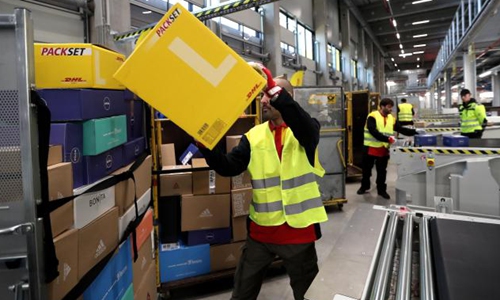 DHL Express India confirmed on Friday that it is temporarily suspending picking up import shipments from the Chinese mainland, Hong Kong and Macao due to recent delays in customs clearances of shipments into India.

The suspension, starting from Friday, will last for ten days.

"We are in close contact with our customers to keep them abreast of the developments," the company said in a note  sent to the Global Times.

The message from DHL confirmed media reports on import goods from China facing hurdles at a number of Indian ports and airports, including Chennai and Mumbai.

Some media reports said there is a "100 percent" physical check of imports in wake of a recent border clash.

Liu Xiaoxue, an associate research fellow at the National Institute of International Strategy under the Chinese Academy of Social Sciences, said the delays at customs is the Indian government posturing amid a "Boycott China" tide in the country and it would only shoot India in the foot.

"Intentionally delaying clearances on Chinese goods would have serious economic repercussions when the economy is humming and demand is high, but current economic activity has contracted amid the COVID-19 pandemic outbreak," Liu told the Global Times.

But India's actions have caused displeasure and complaints from US companies in India with many regularly importing goods to serve their customers in India, as US companies such as Apple rely on imports from China to serve the Indian market.

India's trade deficit with China was 391.7 billion yuan in 2019, according to GAC data.