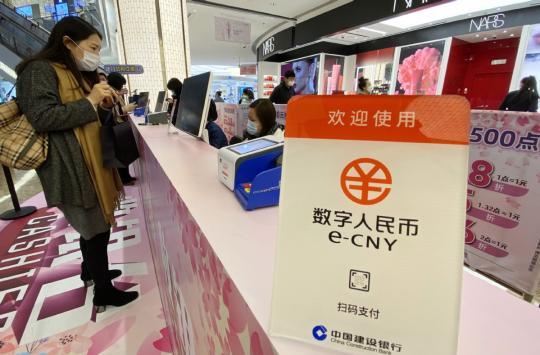 A sign promoting e-CNY payment is seen at a department store in Shanghai. (Photo: China Daily)

China's six major commercial banks are stepping up digital wallet efforts to provide new impetus for the digital renminbi trials in the country.

The Shanghai branch of State-owned Bank of China has allowed customers to apply for digital wallets via its official WeChat account. Upon approval, which normally takes three to five working days after receipt of the application, the user will receive a text message with the download links for the official digital yuan application.

Bank of China officials said the user will be able to add other bank accounts to the official application. A personal quick response code is generated within the application for payments. But details of transfer are yet to be confirmed.

Simple paperwork is needed at China Construction Bank's Shanghai branch. The applicant's job information is checked against a white list. Once approved, the applicant will see the digital wallet interface automatically generated in his/her CCB application. The digital wallet can be used like Alipay and WeChat Pay, said CCB officials.

As reported by Shanghai Securities News on Tuesday, China's six major commercial banks, including Industrial and Commercial Bank of China, Agricultural Bank of China, Bank of Communications, Postal Savings Bank of China, BOC and CCB, have started to promote the use of digital yuan wallets. Tencent-backed WeBank and Alibaba-supported MyBank, both of which are online-only private banks, are also getting ready to test the digital wallet.

The application of e-CNY started last April in Shenzhen, Guangdong province, Suzhou, Jiangsu province, Chengdu, Sichuan province and the Xiong'an New Area in Hebei province. Since then, the application scenarios have been significantly enriched. In early December, JD became the first online retailer in the country to accept digital yuan payments. At the same time, the digital yuan wallet is connected to the bike-sharing service of Meituan, video site Bilibili and ride-hailing platform Didi Chuxing, all of which are part of Suzhou's continued trials of digital wallet application.

Mu Changchun, head of the People's Bank of China's Digital Currency Research Institute, said that e-commerce platforms that accept payments via e-CNY will not have access to users' personal information. E-CNY users can open an anonymous digital wallet by registering a mobile phone number, and telecom operators should not disclose customer information to the central bank or any third-party institutions.

In other words, the e-CNY users' privacy protection is at the highest level among all the existing payment tools, according to Mu.

To promote the use of digital wallets, the first pilot program of the e-CNY digital red packets was conducted in Shenzhen's Luohu district in October last year. Since then, China's central bank has distributed at least 150 million yuan ($23 million) worth of red packets in Beijing, Suzhou, Chengdu, as well as Shenzhen's Futian and Longhua districts.

Cheng Shi, chief economist and managing director of ICBC International, wrote in a report released in early March that the development of e-CNY has started to "accelerate", with steady progress in the online and offline financial infrastructure development. The e-CNY use has also been clearly stated in the regional government work plans released earlier this year.