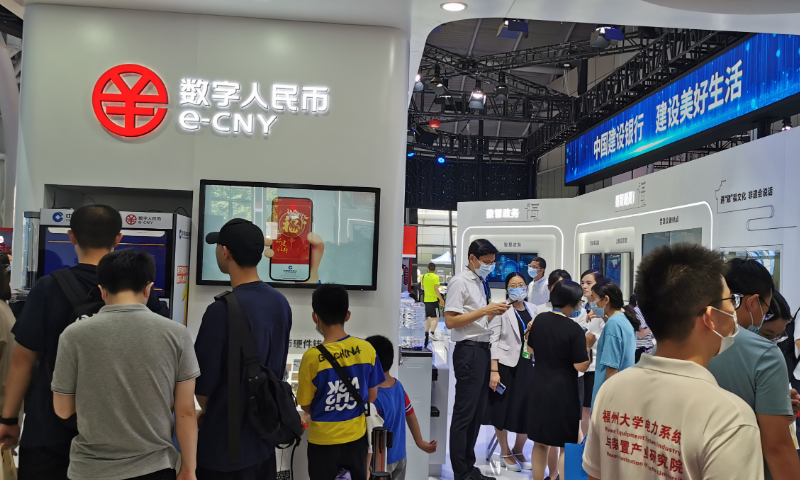 Chinese financial institutions have ramped up efforts in prompting wide applications of the digital yuan with a wide variety of tailor-made products to be launched, as the country is embracing the digital economy for boosting consumption, several bank representatives told the Global Times over the weekend.

While the popularity of the digital yuan has found root nationwide as a safe and easy way of payment, there are not many places where its applications are widely deployed, like in Fuzhou, East China's Fujian Province, a pilot ground in digital economic transformation based on its pillar role as a manufacturing and trade hub neighboring the coastline.

On the sidelines of the two-day 5th Digital China Summit in Fuzhou over the weekend, several major domestic financial institutions presented their latest e-currency pilot products and services which were widely received among the participating audience.

China Construction Bank (CCB)'s Fujian branch participated in last year's event for the promotion of digital yuan, but the big difference this year is that most of the visitors already have a good understanding of the new means of payment and some are loyal users, a staffer with the CCB told the Global Times on Sunday, indicating a stronger recognition to the measure.

In addition to the mobile app for the digital yuan, the bank also displayed at the event their latest pilot products, including the tangible digital yuan wallet, a chip card that combines all the functions that enable users to do payments when shopping at supermarkets, taking the subway or bus, watching a movie at a cinema and other places where digital yuan payment terminals are available. The card can also be used as a door key, according to the bank.

"It is the first time for us to promote the digital yuan wallet to the public at this exhibition," Shi Mingzhen from the CCB said. The wallet is yet to be officially released.

To promote the broad applications of the digital yuan, the Fuzhou government issued on Saturday free coupons with a total value of 20 million yuan ($2.9 million) for residents in a bid to buoy local consumption and digital payments.

Fuzhou has been promoting the wide application of the digital yuan and currently over 10,000 vendors are using digital yuan to process payments in Fuzhou, covering a wide range of businesses.

Ye Yongbin, an employee with the Fujian branch of Agricultural Bank of China (ABC), said they have cooperated with local supermarkets to promote the digital yuan and orders through the new electronic payment have reached a historical high thanks to government support.

The supermarket chain saw more than 30,000 digital transactions, with a total value of up to 3 million yuan in a single day on Sunday after the Fuzhou government issued the digital coupon to boost consumption, according to Ye.

"Although the transaction volume is not large compared with Wechat and Alipay, it is a historic top flow," Ye said.

Other banks such as the Industrial and Commercial Bank of China also showcased their mobile products like a bracelet-like wallet or a case for mobile phones.

The portable wallet makes it easier for people who want to use digital yuan for payment at places where their mobile signal is not stable for online payments or elder users who do not use a mobile phone to pay for things, industry insiders said.

So far, the alliance has 37 members including several large state-owned banks. The alliance aims to align to the digital China strategy, promote the innovative development of the digital yuan, while jointly making technological breakthroughs, and sharing of technology and knowledge resources in the field. 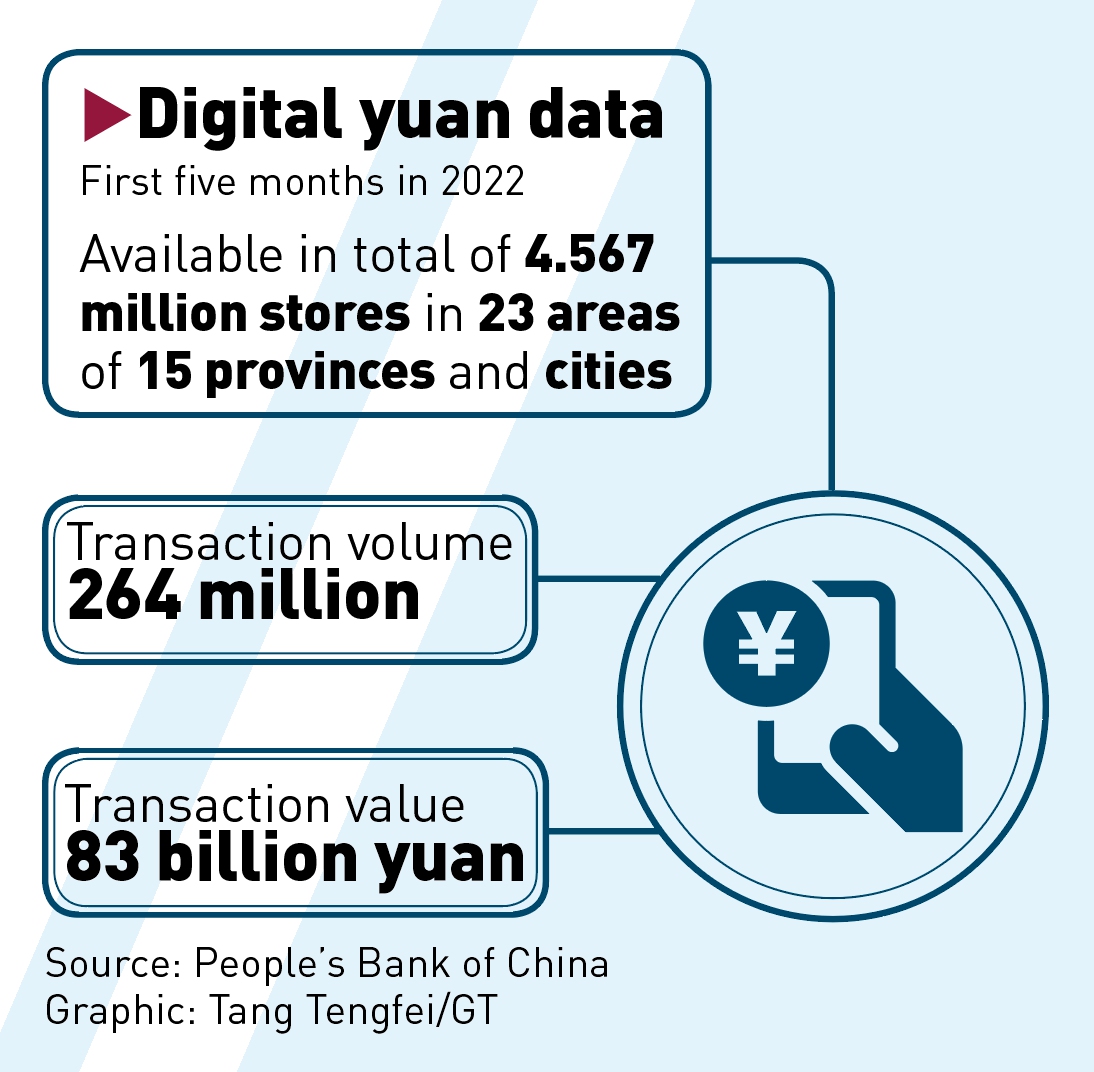 While there are significant momentums enabling the digital yuan to grow in popularity, a main factor behind its growing market recognition is its guarantee for being a safer and more reliable payment means compared with third-party payment systems, experts have claimed.

The digital yuan as a legal cryptocurrency issued by the central bank in digital form can improve the efficiency of supervision and control the flow of funds, while ensuring the safer online transactions compared with payment measures offered by third parties, Tan Xiaofen, an expert from the Central University of Finance and Economics, told the Global Times on Monday.

"Since the underlying foundation of the digital yuan is blockchain, which is preferred due to its traceability and being tamperproof, so that it will be much easier for monitoring the flow of funds, which can effectively reduce the risks of money laundering, corruption, tax evasion, in a way to ensure the safety of funds, and facilitate financial supervision," Tan said.

The development of digital wallets, be it tangible or online form, is conducive to the online and offline application of digital yuan products in all scenarios, which can better solve the gap posed by traditional third-party payment digital application scenarios, Tan said.

The use cases for digital yuan are constantly expanding. Data released by the People's Bank of China shows that, as of the end of 2021, there were more than 8.085 million digital yuan pilots, a total of 261 million personal wallets have been opened, and the corresponding transaction amounted to 87.565 billion yuan, according to media reports.

Zou Lan, director of the Monetary Policy Department of the People's Bank of China, recently noted that the pilot programs for digital yuan have expanded from the original "10+1" pilot areas to 23 areas in 15 provinces and cities across the country, Xinhua News Agency reported on July 13.

At present, digital yuan is mainly used for domestic payments rather than cross-border transactions, but Tan said that, with the advancement of yuan internationalization, its digital form can be further expanded to cross-border payment with wider usage scenarios in the near future.