BUSINESS Digital yuan is being trialed out in more Chinese cities, including Beijing

Digital yuan is being trialed out in more Chinese cities, including Beijing 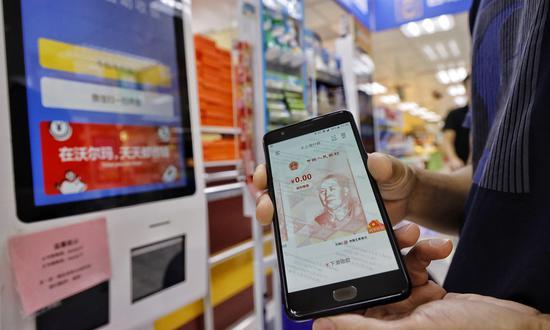 Residents who received "red packets" of digital RMB use the money in stores in Shenzhen, Guangdong Province, on Wednesday. The city launched a pilot program to distribute 10m yuan ($1.49m) in the form of digital currency to residents on Monday. (Photo:Li Hao/GT)

China's official digital currency is being trialed out in more cities. After two rounds of large-scale tests in Shenzhen and Suzhou, the digital Renminbi or yuan, now is being practiced in the southwestern Fengtai District of Beijing.

Coffee chain Mancat Café launched the digital yuan test on Tuesday. Its customers can apply to use the digital currency to purchase any products in the store.

China's digital currency now has completed experiments including basic design, standard making, functional research and cooperation test with other trading systems. The trial in the coffee store is the first for the digital currency application in a real life setting, the local Beijing Daily reported.

After the test in Shenzhen in October 2020, China's second digital currency test in Suzhou, Jiangsu Province, ended on Sunday, with 96,614 residents winning the "red packets" in digital currency and 18,968,200 yuan ($2.90 million) was spent.

Same as the first test in Shenzhen, the second test in Suzhou distributed digital currency "red packet" via WeChat to the residents who win the raffle. Each "red packet" can consume commodities or services worth 200 yuan.

The number of "red packets" distributed in Suzhou is 200,000, twice that of the first test in Shenzhen, which was 100,000. The range of use was also expanded, which covered nearly 10,000 physical stores in Suzhou.

In this test, digital currency "red packet" was first allowed to be used in online stores in JD.com. Some residents also experienced the "off-line payment." It means that user's identity can be verified by the "wallet" of digital currency if there is no mobile network and the payment can still be processed, the first time this function was tested.

According to the announcement on the official WeChat account by Suzhou government, the test distributed digital currency "red packet" worth 20 million yuan, aiming to stimulating the consumption and domestic demand and also a normal test for the development of digital currency.