BUSINESS Discover a sea of possibilities with made-in-China yachts

Discover a sea of possibilities with made-in-China yachts 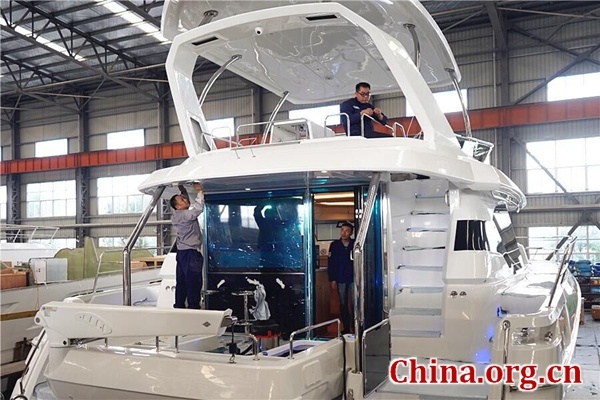 When talking about famous yacht brands, people may first think of those manufactured in Europe or the United States, but to do so without mentioning China would be remiss. That's because the world's leading yacht brand is actually located on the bank of the ancient Fuchun River, under an hour's drive of Zhejiang province's capital of Hangzhou.

The spectacular landscape along Fuchun River was captured on a famous ink painting "Dwelling in the Fuchun Mountains", a masterpiece by Huang Gongwang, one of the "Four Masters of the Yuan Dynasty" some 700 years ago.

Now on the very same banks, now located in what is known as Fuyang district, a fantastic new yacht quietly floats off a pier while several shipyard workers busily perform final checks ahead of its delivery.

The yacht, an Aquila 70-foot power catamaran, is produced by Sino-Eagle Yacht Co, Ltd, the largest premium yacht manufacturer in the world.

Since its establishment in 1985, the company has invested heavily in research and devel-opment and successfully launched four distinct brands over the past three decades. Those include WinTech racing boats, GE surfboards, Stellar kayaks, and Aquila yachts.

While the COVID-19 pandemic has halted most of the sports competitions worldwide, work at the Sino-Eagle Yacht Co, Ltd has continued to grow. That's because sailing has the bene-fit over other sports and leisure activities of satisfying distancing requirements for effective virus prevention while also allowing people to escape into nature. Thus the orders for yachts continue to pour in, according to the company's vice general manager Jin Yin.

Jin attributes the company's success largely to its employment of the brightest minds in the field from both China and abroad.

"We started out by building racing boats and employed the best experts in the field. We believe that building a great company comes down to the people, and therefore we strive to find the best people to join our team," says Jin.

The company now has 12 foreign ship industry experts from countries including the United States, Germany, Slovenia, Australia, and Poland. Through the close cooperation of its Chi-nese and overseas staff, the company has obtained more than 50 independent intellectual property rights patents and two yachts have been listed as National-Level Major New Products.

Recalling his working experience in Hangzhou, Nowak smiles and says, "I think Hangzhou is a wonderful and beautiful city full of opportunities for people possessing the adequate skills."

Another foreign expert working at the company and father of two, John Charles Tallow-wood, comes from Sydney, Australia. He has now worked in China for 13 years, beginning in Zhuhai and since moving to Hangzhou.

Tallowwood majored in shipbuilding and worked and entered the trade after graduation. He explains that he was first attracted to working for Sino Eagle because it is a well-known brand in Australia.

"Sino Eagle is a global company that I am familiar with and I was proud to work for this company," Tallowwood says. Recently, he was one of the winners of Hangzhou's Qianjiang Friendship Award.

Qian Dongsheng, head of Fuyang district's Science and Technology Bureau, said the com-pany's strategy of investing heavily in innovation is in line with the district's development blueprint.

"The fifth plenary session of the 19th CPC Central Committee has focused heavily on inno-vation," Qian says. He also explains that the district has pushed to seize development op-portunities under China's broad scientific and technological innovation strategy and the fast development of the Innovative Ecosystem of Innovation Corridor in western Hangzhou.

Hangzhou in recent years has attached great importance to attracting overseas talent and has issued a series of incentivizing policies. The city ranked fourth in the annual survey ti-tled Amazing China — the Most Attractive Chinese Cities for Expats 2019, as announced at the 2020 Hangzhou International Human Resources Exchanges and Cooperation Confer-ence on Nov. 8.