Display panel makers from China are expected to dominate the global TV panel industry and seize more than half of the global market share next year, according to AVC Revo, a unit of market consultancy firm AVC. 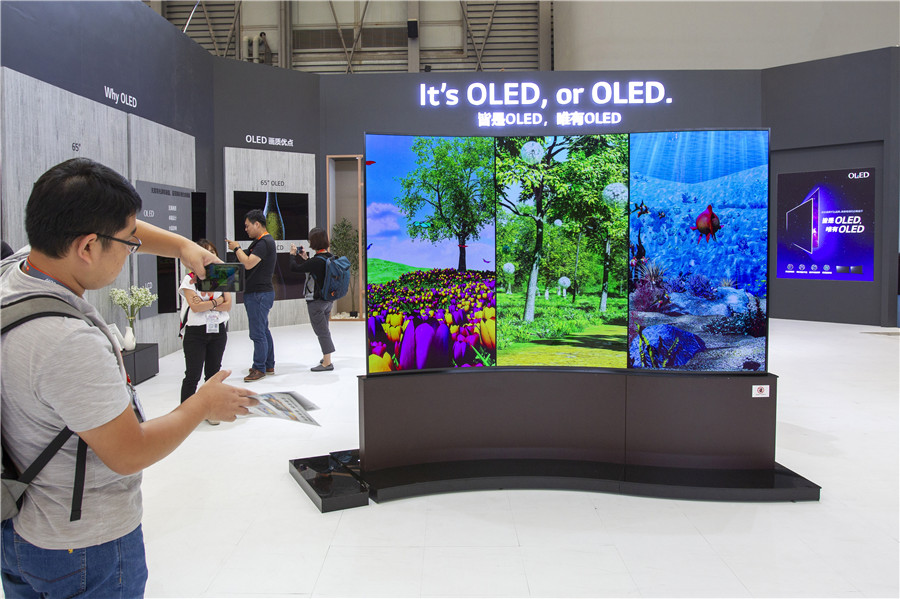 Visitors check out OLED panels at an industrial expo in Shanghai on July 11. (Photo: China Daily)

"Global TV panel shipments will drop by 4.7 percent to 271 million units in 2020, compared with 284 million units this year, but the supply and demand of TV panels will balance it up in the first three quarters of next year," said Bian Zheng, deputy director of research at AVC Revo.

Bian said China will have a 51 percent market share in global TV shipments in 2020, while South Korea will have 25 percent, adding that large-sized TV panels will bolster the healthy development of the industry.

The consultancy said panel makers are making an active layout in the 80 to 90-inch display panels, and the production capacity of large-sized organic light-emitting diodes or OLED screens is enhancing.

AVC Revo's estimates are also echoed by Li Yaqin, president of market research firm Sigmaintell. Li said the general price will be stable across the TV panel sector next year and the relation between supply and demand of panels will gradually become balanced.

Li added due to demand from 5G and intelligent systems, large-size screens are becoming essential as the only tool of the interaction between humans and machines.

A production plant of South Korea's LG Display Co Ltd went into operation in August in Guangzhou, capital of Guangdong province. The plant is able to manufacture 60,000 OLED panels per month that are used for large-sized OLED televisions.

TV maker Skyworth Group is betting big on the cutting-edge and innovative OLED technology to conquer the domestic TV market. It has been producing OLED TVs in partnership with LG Display since 2013.

BOE Technology Group Co Ltd, a leading Chinese supplier of display products and solutions, is doubling down on flexible OLED screens mainly used for smartphones, and the shipment of OLED panels will triple to at least 70 million units next year, said Chen Yanshun, chairman of BOE.

Moreover, Chen added the mini LED, which offer much better image quality and is highly efficient, will witness explosive growth in the next two to three years and become a new development direction.

The company has become the world's largest flat-panel display producer in the first quarter of 2019, statistics from Sigmaintell showed.

Li Dongsheng, TCL founder and chairman, said China will likely take the lead in the semiconductor display sector across the world within the next three to five years.

He added China will play an active and vital role in promoting the development of the semiconductor display industry, which has a high entry threshold and needs high investment.

"At present, 4K panels including 55-inch products and 65-inch products are in the red. The launch of 8K ultra-high definition will quickly improve product structure and increase the profitability," Li of Sigmaintell said.

Li underlined those manufacturers who can promote 8K quicker than others will get more profits next year, which is also an opportunity that panel manufacturers should grasp.

She estimated that the penetration rate of the 75-inch 8K market will increase sharply in 2022 and 8K will gradually become the mainstream resolution ratio.