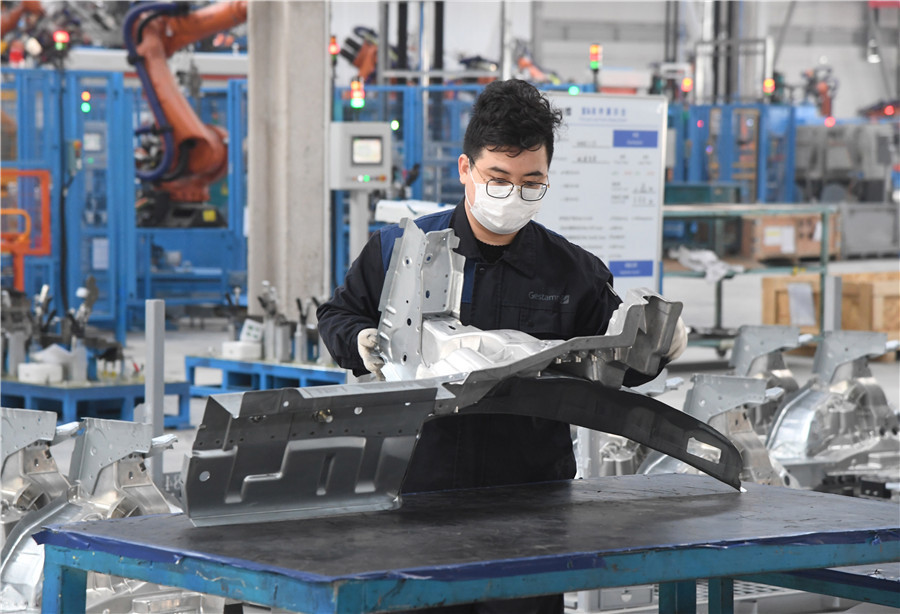 State-owned enterprises will maintain a stable and diversified growth pace this year, thanks to the fresh momentum gained from the fight against the novel coronavirus outbreak, officials and industry experts said.

The outbreak has not only tested SOEs' strength in dealing with emergency situations, but also pushed the application spread of digital technologies and cross-industry collaboration in building large-scale facilities within a short time, said Weng Jieming, vice-chairman of the State-owned Assets Supervision and Administration Commission.

The work resumption rate for 48,000 subsidiaries of centrally-administrated SOEs amounted to 91.7 percent by March 5. Among them, the rates for businesses from sectors such as petroleum and petrochemicals, transportation, telecommunication and power generation have reached between 95 percent and 100 percent, data from the SASAC showed.

With 5G construction as the starting point, China will further promote the digital and intelligent transformation in areas like energy, transportation, logistics, manufacturing and infrastructure development in SOEs, and build public service platforms and industrial ecosystems to optimize allocation of various resources and industrial structure, Weng said.

The country's top State assets regulator has urged all central SOEs to step up timely deliveries of critical medical materials, like during wartime, after the epidemic broke out.

China to date has 96 central SOEs. They have played an essential role in assisting the country in producing materials for epidemic prevention and control, building medical infrastructure and other supporting infrastructure facilities, as well as supplying food, power and enhanced communication networks in Hubei province.

In addition to supplying gasoline and disinfectants to Wuhan in Hubei province, China National Offshore Oil Corp announced earlier this month that two production lines in Dianjiang county of Southwest China's Chongqing have started making face masks. They are capable of making 200,000 face masks on a daily basis.

CNOOC said it will put another six production lines into operation by the end of this week in Chongqing. Supported by these facilities, the group's total facial mask making capacity in the area is expected to reach 600,000 per day by the end of March.

Zhou Guoping, chairman of China Anneng Construction Group Corp, said SOEs have found a way to strike a balance between epidemic control and production resumption, and the same will lend support to the strong fundamentals of the Chinese economy.

"The epidemic will accelerate the modernization of management systems, promote the upgrading of technologies and help transform the economic structure of SOEs," he said.

While deploying resources to fight the epidemic at home, China Changan Auto Group Corp, a subsidiary of China North Industries Group Corp, shipped 7,143 vehicles to its clients in Russia, Saudi Arabia and Chile in January.

The company is now producing 6,200 automobiles for its foreign clients after receiving the orders in February, and it has already delivered over 1,800 of these.

Zhou Zhiping, CCAG's president, said all the vehicles were shipped from Chongqing to Shanghai Port via inland waterborne transport. The company has enhanced contact with domestic and foreign suppliers to coordinate the delivery time of various components to ensure normal operation and timely delivery.

Shanghai Zhenhua Port Machinery Co, the world's biggest port machinery manufacturer and a subsidiary of China Communications Construction Co, delivered two intelligent straddle carriers to its clients in Stockholm, Sweden, earlier this month, marking the first time for a Chinese company to export goods of this kind to overseas markets.

For SOEs, the coordinated operational experience, new technologies and solutions gained recently will be useful to develop the market after the epidemic, particularly in areas such as modern manufacturing, multimodal transport, medical equipment and materials, biomedicine and big data application, said Zheng Donghua, deputy director of the research center at the SASAC.