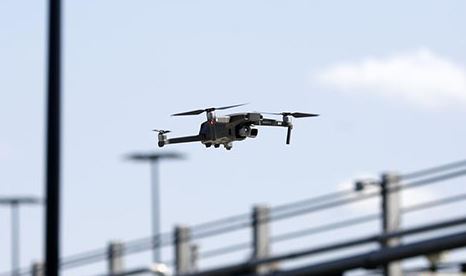 Photo taken on August 23, 2018 shows the DJI Mavic 2 Pro drone during the launching ceremony in New York, the US. (Photo: Xinhua)

China's largest drone-maker said Tuesday its plan to assemble drones in the US and make high-security Government Edition drones aims to meet the increasing demand of the US market, rather than respond to the security warning issued by the US last month, and the company has no intention of moving its production facilities out of China.

DJI, the Shenzhen-based drone giant, made the remarks in response to a Monday report by the New York Times which claimed the move was designed to "get on US officials' good side." DJI plans to repurpose a warehouse in Cerritos, California to assemble a new version of a drone "that has been popular among federal and local government agencies," the report said.

The plan aims to meet the rapid increase in demand from the US market, the company told the Global Times on Tuesday.

The company's  Mavic 2 Enterprise Dual drone is in high demand in North America, and it was developed in close cooperation with US partners. Assembling the drone in the US with the aim of selling them there will bring significant business benefits, DJI said.

An assembly test run was successfully conducted in Cerritos in January. Once it receives approval from US authorities, DJI's first overseas assembly line will be built there, the company said, noting that the move will also allow more US companies to provide components.

The production of the company's other products will remain in Shenzhen, South China's Guangdong Province, DJI said.

DJI will continue expanding its drone manufacturing in China, the company said.

Establishing a US assembly line had been discussed for a long time, and the development of the Government Edition drone began in 2017, a business insider who asked not to be named told the Global Times on Tuesday.

So the plan is not aimed to please the US officials, and it is not necessary to read too much into it, according to the insider.

In May, the US Department of Homeland Security issued an alert claiming Chinese-made drones may be sending sensitive flight data to Chinese manufacturers, which would also be obtainable by the Chinese government, CNN reported. DJI responded that its customers have full and complete control over how their data is collected, stored and transmitted.

The newly introduced Government Edition drone saves data only on the drone itself, DJI said in a statement released on its website on Monday.

The new drone is created specifically for use in high-security situations by government agencies around the world, it said.