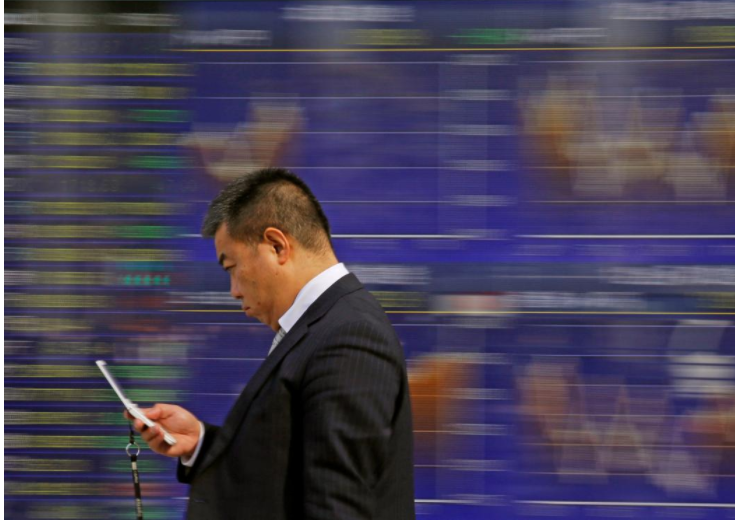 A man walks past an electronic stock quotation board outside a brokerage in Tokyo, Japan, February 9, 2018. Photo: Reuters/Toru Hanai

The dollar stayed on a slippery slope on Monday amid fears of a global trade war, while the euro dipped briefly but rebounded quickly after results of exit polls for Italy’s elections pointed to a hung parliament.

A center-right coalition is set to win the most seats in Italy’s parliament ahead of the anti-establishment 5-Star Movement, according to the exit polls, although it was unlikely to produce an outright winner.

The euro level rose 0.3 percent to $0.1.2352, after going as low as $1.2335 as the polls suggested a period of uncertainty until a coalition government could be formed.

Also helping the euro was the revival of Germany’s grand coalition over the weekend, meaning Chancellor Angela Merkel’s conservatives will form a new government more than five months since the country’s inconclusive election.

The euro also got a bit of a lift from safe-haven flows as risk sentiment soured after US President Donald Trump proposed tariffs on imported steel and aluminum, rattling financial markets last week.

Still, Wall Street rebounded late on Friday as investors who were initially spooked by the prospect of a global trade war clung to hopes that Trump was just rattling sabers as a negotiating tactic.

News over the weekend suggested, however, that Trump was going ahead with his plan, while there was no indication that allies would be excluded from the tariffs.

Canada and Mexico have threatened retaliation, and the European Union said it would apply 25 percent tariffs on about $3.5 billion of imports from the United States if Trump carried out his threat.

Trump says the tariffs are needed to protect domestic industries against unfair competition from China and elsewhere.

Analysts were not sure how Asian markets would react on Monday, although sentiment is likely to remain jittery.

The S&P 500 and Nasdaq rebounded from losses of 1 percent or more to close higher on Friday. The Dow, however, ended lower and remained in negative territory for the year so far.