BUSINESS Domestic chips to get a big boost

Domestic chips to get a big boost 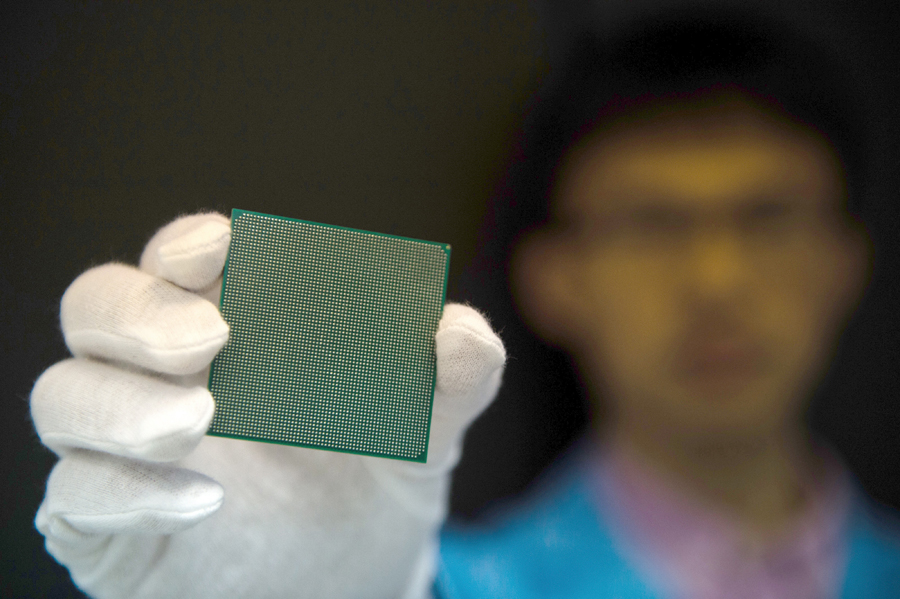 Government procurement in China to include homegrown processors

China is including domestic processors in its government procurement plans, as the nation steps up its effort to promote the application of homegrown chips in government agencies and State-owned enterprises.

The move is likely to put pressure on US tech giant Intel Corp whose chips are now widely used in China's server market, experts said on Wednesday.

According to a proposal published on the official website of the Central Government Procurement Center, servers powered by domestic central processing units including Loongson, ShenWei and Phytium are included in China's government procurement plan for 2018-19.

This is the first time that homegrown chip-driven servers have been included in such a proposal, underlying China's determination to promote the application of domestic processors which are making steady progress in performance. State-owned enterprises and government agencies are important buyers of information technology equipment in China.

Loongson is the brand name for China's first self-developed general-purpose microprocessor. ShenWei is a homegrown CPU that powers Sunway TaihuLight, the world's fastest supercomputer. Phytium CPUs are developed by the National University of Defense Technology, a top military academy in China.

Nicknamed the "brain" of electronic products, chips lie inside a wide range of products and power mobile phones, computers, automobiles and other equipment. In recent years, China has spent more than $200 billion on imported chips annually, more than the amount spent on crude oil imports, according to official data.

Hu Weiwu, president of Loongson Technology Corp, said the move is a "milestone" for homegrown chips, "highlighting the strong support the government gives us".

So far, most servers included in government purchase plans come with Intel processors. But as domestic chips make progress, they are good enough to support certain application scenarios, Hu said.

"More efforts are needed to cultivate a computer ecosystem, including software, to support the use of China-developed chips. The wider the use of these chips, the better they will become. It will take time, but we are confident about the process," Hu added.

According to a roadmap released by the National Manufacturing Strategy Advisory Committee, China's integrated circuit industry will narrow its technological gap with those of the world's leading countries by 2020, with annual sales growing at over 20 percent on average.

Liu Jiepeng, deputy general manager of the marketing department at Tsinghua Tongfang, a major server maker in China, said in an interview with Global Times that there is a strong demand for domestic chip-driven servers from government agencies amid growing concern about national security.

The intensified push to develop the homegrown semiconductor industry comes amid widespread concern that heavy reliance on foreign chips will threaten the foundation of the nation's electronics industry. Such concerns have intensified since the recent US decision to ban the sale of key US components, including chips, to Chinese telecom equipment maker ZTE Corp.