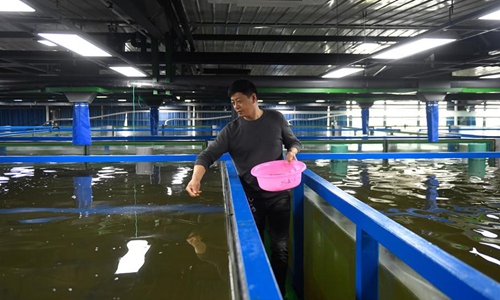 With the coronavirus outbreak in Hubei Province being greatly alleviated, the aquaculture industry in the region has been beginning to actively to be put back into production, gradually changing sales tactics and channels from previous dependence on international trade to the domestic market, which is starting to pick up as the harbinger of a nationwide consumption recovery.

Liu Qiangming, owner of a local aquaculture farm in Qianjiang, Hubei Province, told the Global Times on Saturday that they are changing their market orientation from overseas to domestic as the coronavirus outbreak in China has been mostly contained, while the US and most of Europe, which are also major exporting destinations, are still under siege in battling the global pandemic.

"We used to export a lot to the US, Spain, and the UK, which all together make up at least 30 percent of our markets, but now we must change our orientation to survive, as relying on foreign markets are not so realistic at the moment," Li said.

Fortunately, crawfish, which is their major product, is turning a profit in the domestic market, including in Hubei where the situation is largely getting back to normal.

"We had been heavily relying on restaurants to buy our products before, while now as many restaurants remain closed and people are not accustomed to dining out, we adjusted our market segmentation by delivering our products directly to consumers," Liu said, adding that without intermediaries, costs are reducing and so is the price.

To teach consumers how to cook crawfish, many suppliers including Liu have started to share tips online including video broadcasts, another new opportunity for the business.

However, in addition to positive perspectives, challenges remain.

"Now many consumers do not have any strong desire to spend as before, as their savings are now tighter, because businesses were suspended, and marine-life consumption is not as urgent as loans for cars and houses," he said, talking as a Hubei resident himself.

Data from Hubei's Department of Agriculture and Rural Affairs suggested that in March, crawfish sales in the province were only 35 percent of what they were a year earlier.

To solve the problem regarding aquaculture merchants, local governments and companies from Hubei and beyond have stepped in to help.

Alibaba Group also announced the purchase of 1 billion yuan ($142 million) worth of crawfish from Hubei on April 1. With the help of the supply chain system of Alibaba's digital agriculture business division, Hubei aquaculture products including crawfish have been sold all over the country via online platforms.

Cui He, president of the China Aquatic Products Processing and Marketing Alliance, told the Global Times on Saturday that a conservative prediction for the possible losses from the aquaculture industry in Hubei would be in the hundreds of millions of yuan at least as businesses were being suspended amid the coronavirus outbreak.

"Although China has slowed down the pandemic, overseas markets are still struggling amid the crisis and continue with lockdowns," Cui said.

However, Cui said that Hubei's aquaculture industry is no longer heavily relying on exports as it once did before, as domestic consumption is increasing with the growing demand for expensive aquaculture products like crawfish.