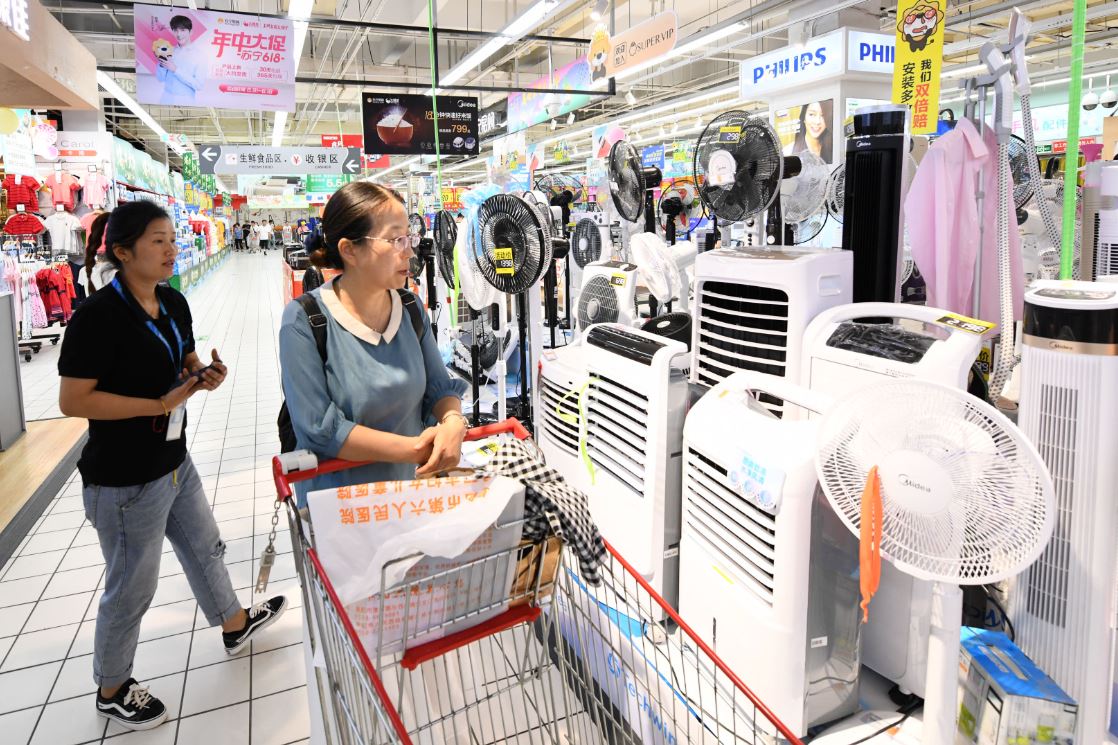 Consumption will continue to be the strongest driver of China's economic growth and the country's regulators are looking at ways to further liberalize its potential.

Immediately after the three-day Dragon Boat Festival at the beginning of June, during which, according to China's Ministry of Culture and Tourism, Chinese tourists spent 39.3 billion yuan ($5.72 billion) on domestic travel, the country's savvy internet users were busy arranging their shopping carts for the online sales day on June 18.

"It is the best time to stock up on those daily necessities of life for the whole year," said Hong Xin, a 28-year-old office worker in Suzhou, Jiangsu province, who had her eye set on a toilet paper and washing liquid value deal on Tmall, one of the country's biggest e-commerce platforms.

She said the sales day was not just about saving money, but also about enjoying better products. "For example, wet toilet tissue is quite expensive if you buy it in the supermarket one pack at a time, but it is much more affordable during the sales day if you buy in bulk," she said.

Consumers like Hong, who have a strong willingness to spend to make their lives easier, are adding impetus to national consumption, which achieved an eye-catching performance in the first quarter of 2019, according to Nielsen, the New York-headquartered information, data and measurement company.

Nielsen's report said that in the first quarter, China's consumer trend index, which measures perceptions of local job prospects, personal finance and willingness to spend, was close to a historical high.

Consumption has been the top driver of economic growth for six years in a row. In 2018, it contributed to 76.2 percent of economic growth, 18.6 percentage points higher than 2017, and it is expected to be a major force again this year.

"The government has been continuously deepening the reform of corporate taxes and fees to stimulate enterprises, as well as implementing policies to stimulate employment and encourage entrepreneurship," said Andy Zhao, president of Nielsen China. "Meanwhile, personal tax reform has also taken place ... consumers' willingness to spend has been further encouraged."

In early June, the National Development and Reform Commission, the Ministry of Commerce and the Ministry of Ecology and Environment released an action plan to accelerate the upgrade of consumption goods and resource recycling, which addressed the production, application and innovation of new energy vehicles, green home appliances and the commercial use of 5G mobile phones.

"The market size in China is not only huge, but is also undergoing a consumption upgrade," said Wang Qing, a research fellow at the Development Research Center of the State Council. "With the new round of policies being launched to stimulate consumption and companies diversifying their offerings, the consumption potential will be further liberalized."

Liu Xiangdong, a researcher at the China Center for International Economic Exchanges, said besides the policies launched to further stimulate consumption upgrade, the authorities needed to regulate the consumption environment in elderly care, healthcare and information while easing market entry in the healthcare, education and elderly care industries.

Foreign companies are also showing a positive attitude toward the Chinese market.

"The implementation of more opening-up policies in the field of consumption is contributing to the shift of China's economic growth model from investment orientation to consumption orientation, which is more sustainable," said Stephane Rinderknech, CEO of L'Oreal China, one of the world's leading beauty products makers.

"Today, we are more confident than ever in developing and seizing opportunities in China. With a continuously improving business environment, consumers' trust and our great China dream team, we are confident in making China the number one market for L'Oreal Group in the near future," he said. "We hope the joint efforts between the Chinese government and companies will further stimulate China's domestic consumption and benefit consumers."

Faced with trade friction with the United States, experts believe consumption will play a major role in offsetting the negative impact on trade and putting economic growth on a firm footing.

"China is a market with a population of 1.4 billion and 400 million middle-income earners, and there is a strong demand for consumption upgrade," said Wang Bin, an official at the Ministry of Commerce. "The domestic consumption market is full of potential and it is China's biggest advantage to maintain long-term stable development."

"The country's exports in the first five months (of 2019) had been increasing but at a slower pace... in the future, the trade surplus will inevitably narrow," said Xu Hongcai, deputy chief economist at the China Center for International Economic Exchanges, arguing that the degree of dependence on foreign trade will decrease.

He said the country needed to turn to domestic demand to power economic growth, and the country's ongoing urbanization offered large potential.

"The urban population is below 60 percent, but is expected to reach 68 percent by 2030," Xu said. "The ongoing urbanization will stimulate consumption upgrade and infrastructure demand. Domestic demand for investment and consumption is the major dividend."

Wang Huiyao, president of the Center for China and Globalization, agreed.

"The contract responsibility system in the 1980s, the privatization of urban housing in the 1990s, which has created 400 million middle-income earners, and membership of the World Trade Organization, have powered the high-speed economic growth of the past four decades," said Wang.

He pointed out that China is now home to 1 billion low-income earners, including 500 to 600 million farmers and 300 million migrant workers, and the current task was to liberalize farmers' homesteads - land previously allotted to farmers by the government to build homes, which cannot be transferred to urban residents.

He argued that if farmers are able to become middle-income earners by selling their homesteads, domestic demand could be largely increased.