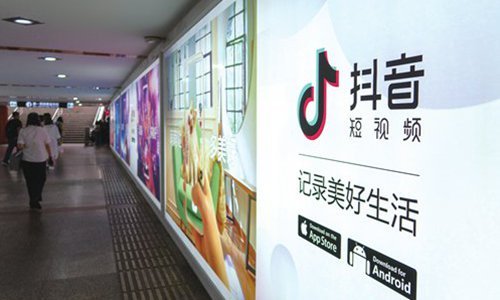 An ad of Douyin is seen in an underground passage in Shanghai in May. (Photo: VCG)

Chinese short video app Douyin announced on Wednesday it would adopt a "teenager mode" for all its registered users under 14 years old, as the platform ramps up efforts to protect under-agers from inappropriate online content.

For users between 14 and 18 years old, Douyinis also providing protection through features like content recommendation and search. For instance, they are prohibited from showing any information other than their screen names and profile pictures to strangers.

The measures will be put into practice from June 1.

Besides content management, Douyin also set up a special customer hotline for teenager users, as well as increasing content management for under-agers within its community self-regulation conventions, the platform noted.

Douyin's efforts to clean online content for young users comes at a time when the Chinese government is mounting efforts to protect youth from unhealthy or inappropriate internet content. Within the country's recently revised Juvenile Delinquency Prevention Law, a new section for internet content protection has been set, while websites have also been given higher requirements than before so as to better protect teenager users.

So far, many live streaming apps in China have launched special modes for teenager users, but Douyin is the first short video platform to launch a set of stricter protective measures to protect teenager users.