BUSINESS Dow closes above 33,000 for first time after Fed decision

Dow closes above 33,000 for first time after Fed decision

NEW YORK, March 17 (Xinhua) -- US stocks rose on Wednesday as investors pored through a key policy decision from the Federal Reserve. 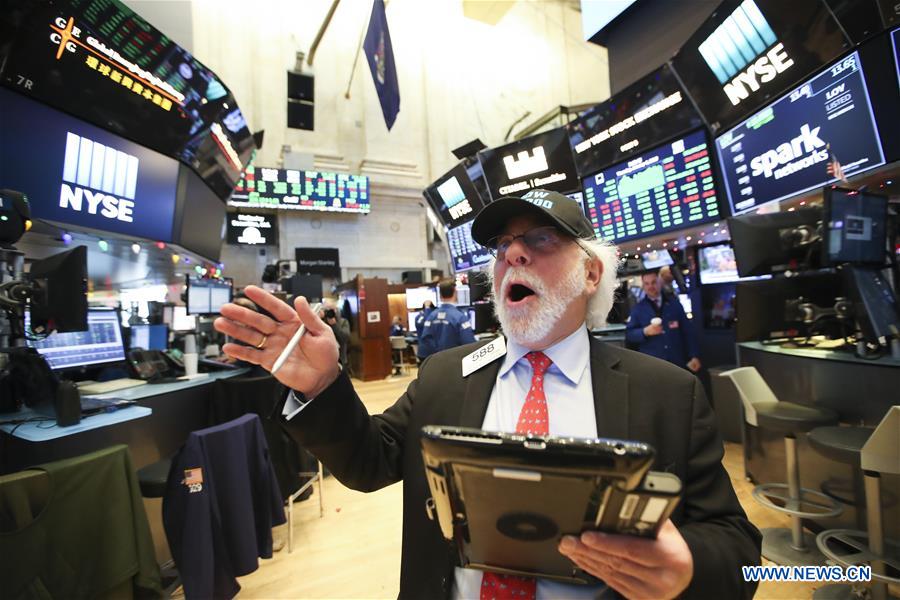 A trader works at the New York Stock Exchange in New York, the United States, on Jan. 4, 2018. U.S. stocks closed higher on Thursday, with the Dow Jones industrial average breaking above 25,000 for the first time, as jobs data from the country came out positive. At the close, the Dow Jones Industrial Average rose 152.45 points, or 0.61 percent, to 25,075.13. (Xinhua/Wang Ying)

Six of the 11 primary S&P 500 sectors ended in green, with consumer discretionary up 1.41 percent, leading the gainers. Utilities slid 1.63 percent, the worst-performing group.

U.S.-listed Chinese companies traded mostly lower with six of the top 10 stocks by weight in the S&P U.S. Listed China 50 index ending the day on a downbeat note.

The U.S. Federal Reserve on Wednesday kept its benchmark interest rate unchanged at the record-low level of near zero, as inflation debate heats up, driven by COVID-19 vaccination progress and the latest relief package.

Looking ahead, the median projection of unemployment rate by FOMC participants is 4.5 percent at the end of this year and moves down to pre-pandemic level of 3.5 percent by the end of 2023, according to the Fed's latest economic projections also released on Wednesday.

"Fed policy is in wait-and-see-mode. The new economic forecast shows significant divergence in economic expectations, but the majority of participants see no rate hikes through 2023," Chris Low, chief economist at FHN Financial, said in a note on Wednesday.

"Changes to growth, unemployment, and inflation forecasts suggest the Fed as a group expects inflation will run a little hot thanks to strong fiscal stimulus, but not enough to require a monetary policy response," he added.

On Tuesday, Wall Street's major gauges finished mixed with the Dow and the S&P 500 ending lower, while the Nasdaq eked out a modest gain.