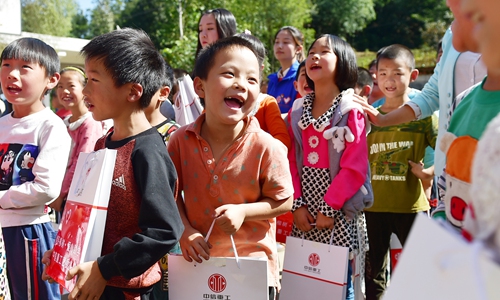 The number of dropouts of students at the nine-year compulsory education phase in China's 832 national-level poverty-stricken counties has dropped to 65,000 from 290,000 in May amid efforts of China's integrated educational campaign aimed at persuading school-age children to go back to schools.

In recent years, the popularization and consolidation of compulsory education in China has continuously improved. However, due to various factors such as school management conditions, geographical barriers and traditional backward thoughts, there are still dropouts in some poverty-stricken areas.

Controlling the dropout rate of compulsory education is an important way to eradicate poverty and stop the intergenerational transmission of poverty, officials from the Ministry of Education told the media.

In 2018, the net enrollment rate of primary school-age children in China reached 99.95 percent, and the retention rate of compulsory education reached 94.2 percent, reaching the average level of high-income countries in the world.

There have been more than 30,000 officials in Northwest China's Qinghai Province who have given up holidays to visit families and herdsmen's tents to figure out the social conditions of students who dropped out of school, and persuade them to return to school. The authority in Northwest China's Gansu Province has developed an app for schools to count the number of students who attend every day.

Lanping is one of the most impoverished counties in Southwest China's Yunnan Province, and the government there has finally sent more than 120 students back to school through measures such as administrative punishments on parents refusing to send children to schools.

Local governments across China have intensified efforts to publicize education laws and use legal actions, urging parents to send their children to school. The Ministry of Education invests nearly 30 billion yuan ($4.28 billion) every year to strengthen the construction of schools in rural areas and boarding schools in townships to enhance the attractiveness of rural schools.