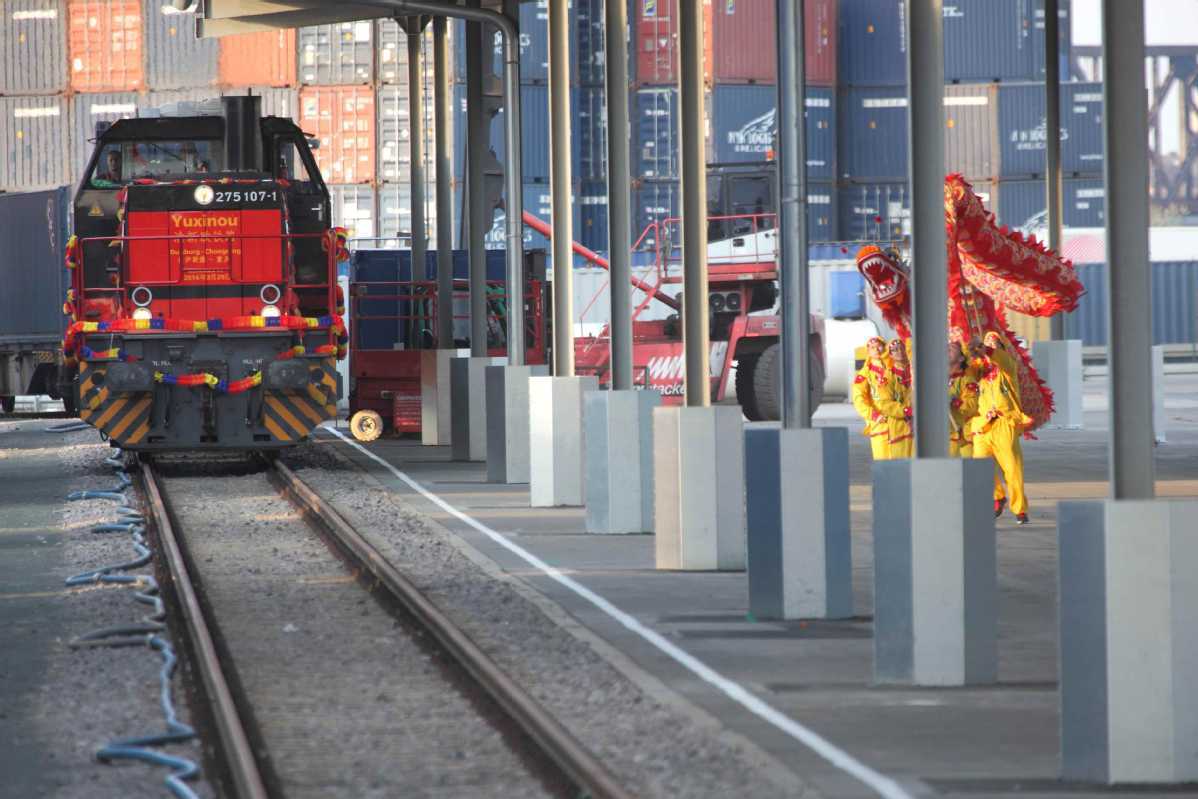 The Yuxinou in 2014 in the Port of Duisburg. (Photo: Agencies)

The friendship between Wuhan and Duisburg is resilient - especially in difficult times!

Duisburg and Wuhan, who has been hit so hard by the Coronavirus, are connected by a special friendship. The location of the largest inland port in the world has maintained an intensive and friendly relationship with Wuhan since 1982. We in Duisburg are not only recognized and valued partners for Chinese investors and scientists. We also see ourselves as friends of the people in the economically strong metropolis of Wuhan. Between Wuhan and Duisburg there is the oldest town twinning between the two countries. Our close friendship with the city of Wuhan is experiencing new impulses, particularly as a result of the Corona pandemic. In the coming week, the first train from Wuhan since the outbreak of the pandemic will reach Duisburg again. Its arrival here in Duisburg is eagerly awaited by many people. Medicine and protective clothing for hospitals in Germany will be part of the freight. This close connection will take on a new, larger dimension with the revival of the Silk Road.

Close friendship between Wuhan and Duisburg

China´s administration helped to shape the initial impetus for Duisburg's close rail link with China. Members of both governments, China and Germany, experienced the arrival of the "Yuxinou train" with me on March 29, 2014 during his state visit to Germany. At that time, the 10,300-kilometer route between Chongqing and Duisburg harbor was covered three times a week. Today, about 40 trains per week run between Duisburg and China. With the "One Belt - One Road" initiative, China has opened the gateway to Europe for transcontinental rail transport in Duisburg Port. We initiators have been somewhat smiled at for this idea of regular train services over such long distances. Today - in the midst of the corona crisis - it is precisely rail transport that keeps the value-added chains alive in air and sea freight as the frequency of air and sea freight declines. Already in the coming weeks we will reach pre-pandemic levels in trade with China. And that is a positive and hopeful development in difficult times. For our Chinese friends, as well as for us. 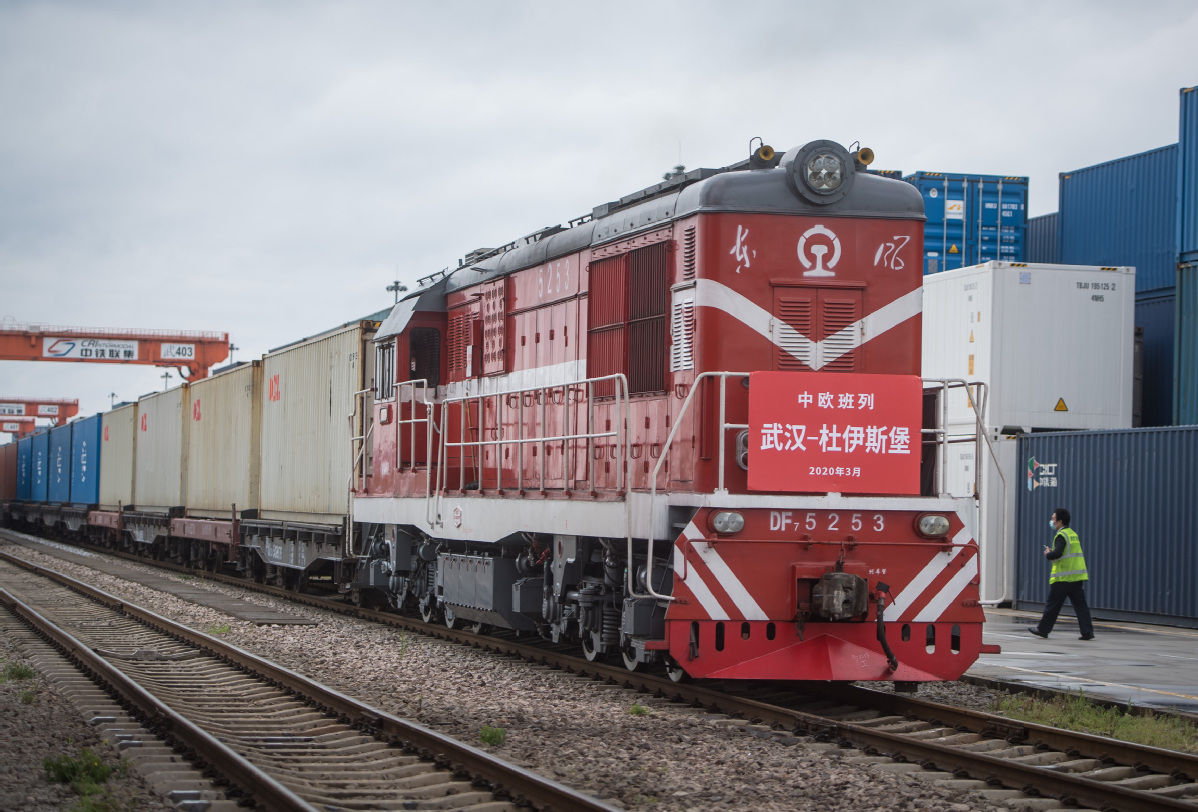 A cargo train bound for Duisburg in Germany leaves Wuhan, capital of Hubei province, over the weekend. (Photo: Xinhua)

Two days after the opening of the train line, the German-Chinese Year of Youth Exchange was initiated. It is entitled "Exchange, Friendship, Future". Schoolchildren and students, young scientists, sportsmen and women or young artists from both sides have been coming together regularly ever since, creating networks that will carry good relations between our countries into the next generation. Our children learn to experience a different culture and perhaps even learn their language.

And what is true for Germany is also true for the whole of Europe: The European Union is China's most important trading partner and the largest sales market. China's trade volume with Germany is almost as large as China's trade with France, Great Britain and Italy combined. And the Port of Duisburg is the main hub for this trade. German companies and their joint ventures have made outstanding contributions - to the benefit of both sides - to China's technological development. Many companies have also introduced new elements of a socially oriented corporate culture. Increasingly, Chinese companies are also investing in Germany for mutual benefit. Despite the current slowdown in growth, many German companies want to expand their business in China. In order to continue to develop economic dynamism in the future, innovations are essential - for example, to drive forward the digitization of industrial production. We would like to cooperate even more closely with China in this area - especially when the legal protection of innovations is better secured.

China and Germany have many things in common. Our two countries are the most populous and economically strongest countries on their respective continents. At the same time, China and Germany are proving to be an anchor of stability for their regions of Europe and Asia, even in difficult times of pandemic crisis. And there are historical reasons for this: Those of us responsible in the Port of Duisburg in particular have great respect for many Chinese achievements since 1978 - for the economic development that has enabled so many people to lift themselves out of poverty - this is a historic achievement, especially against the background of historic aberrations, with their terrible consequences for a large part of the local population.

Duisburg and Wuhan have much in common

We people in Duisburg, who are familiar with the hard work in the coal mines and steelworks, also admire the enormous willingness of the Chinese to perform, the striving of so many young people for education - with the aim of one day giving their children a better future through their own hard work. We are also pleased about the cosmopolitanism of many young people who come to Germany to study and about the enthusiasm with which they later contribute this knowledge to the development of their country. And it is with interest and respect that we perceive that there is such a broad spectrum of views and ways of life in China today, which would have been unimaginable forty years ago, when this first city friendship between China and Germany would have been unimaginable. In a word: Chinese and German society has become more diverse through closer cooperation. This diversity, like the ability to innovate, is an important source of inventiveness and thus for the success of both Europe and China.

We can learn a lot from China. As those responsible in the Port of Duisburg, the discipline and dedication of our friends in Wuhan are also an example to us in the pandemic crisis. As logistics experts, we are aware of the special social responsibility we have for people. We are responsible for maintaining the supply chains and our economy in order to minimize the impairment of the port's supply and disposal function for Germany and Europe. We are already feeling the effects of the significant decline in trade volumes and the restrictions on our daily work are also drastic.

We look with admiration at the extraordinary commitment of our friends in Wuhan in recent weeks. We in Duisburg also have great commitment, collegiality and team spirit among our employees in the final weeks of the crisis. It is the working people, the laborers, those on the locomotives, on the tracks and cranes, in the packaging plants, halls, trucks, signal boxes, ingates are doing an excellent job to maintain our port and the logistics for our continent. They have to work under special safety and hygiene regulations. This crisis helps us to seek and find our strengths. We are happy that in these difficult times, our Chinese friends have stood by us. In Germany, health is the most important thing! In China the sentence of Confucius is valid: If you are poor, but healthy, then you are half rich. The friendship between Wuhan and Duisburg showed us: We stand by each other in good times and bad. This makes all our lives richer.