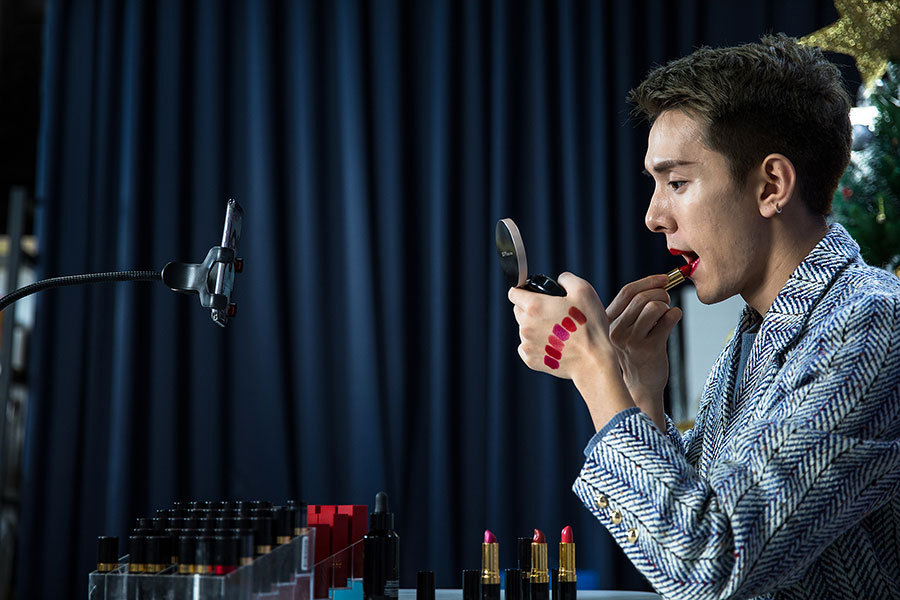 Li Jiaqi, a Chinese blogger, who endorses beauty products through livestreaming, applies lipstick during a live broadcast on the Taobao platform in Shanghai. (Photo: China Daily)

Nearly 90 percent of China's 3.5 million e-commerce platform-based businesses have resumed their operations so far this year, despite the effect of the COVID-19 outbreak, said the Ministry of Commerce on Saturday.

As the online sales sector has played a prominent role in driving social consumption in China, the country will launch an online shopping festival to boost consumption from April 28 to May 10, said Cai Yudong, deputy director-general of the department of electronic commerce and informatization under the Ministry of Commerce.

Over 109 e-commerce platforms will take part in the festival, selling a great variety of quality goods ranging from agricultural products to electronic devices and daily necessities.

The festival is jointly launched by the Ministry of Commerce, the Ministry of Industry and Information Technology, the State Post Bureau and the China Consumers Association, he added.

The country also sees cross-border e-commerce as a bright ray of hope amid gloomy global trade, the State Council, China's Cabinet, announced plans earlier this month to establish new pilot zones for cross-border e-commerce, support the processing trade and host an online version of the 127th China Import and Export Fair, or the Canton Fair - the country's signature semiannual export-promotion event, to minimize the pandemic's impact on global trade.