"The sound of tape being torn is the most inspiring one in our village," said Wang Jianfeng, the "first secretary" in charge of poverty relief in the village of Dahuaishu in Chunhua county, Northwest China's Shaanxi province. 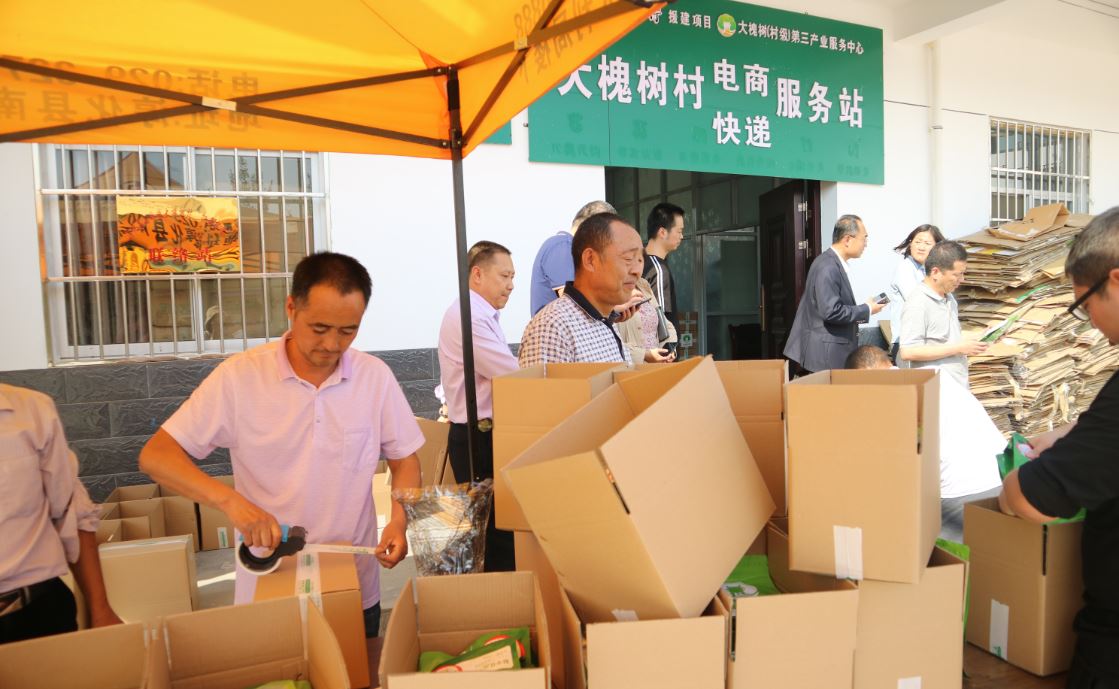 The sound he referred to came from the village's e-commerce station, where villagers were using sealing tape to pack into boxes fruit just collected from farmlands.

The packed fruit will be sent to customers all over China, covering 20 provinces.

Wang was a manager in the executive office of Bank of China in Beijing and went to Dahuaishu village to serve as the secretary of its Party committee in May 2018.

"When I first came to the village, I was amazed by the very delicious cherries, which were not only red and big, but also juicy and sweet," recalled Wang. However, to his surprise, the fruit was difficult to sell because of the lack of a marketing channel, so it was sold to some local business people at a low price.

"As the 'first secretary' who came to help villagers increase their income, I ought to do something. E-commerce should be a good way, which could sell the fruit at a higher price and let people from other provinces get access to the fruit as well," Wang said.

After a year's preparation, on May 15, the e-commerce station in Dahuaishu village started its business. Fruit, nuts and grains from the village could be sold anywhere in China through an e-commerce platform, such as Gongyi Zhonghang, an ecommerce platform set up by Bank of China to help with poverty alleviation, and Taobao, as long as express delivery could get there.

The station has also collaborated with different express companies to improve the efficiency of sending goods. 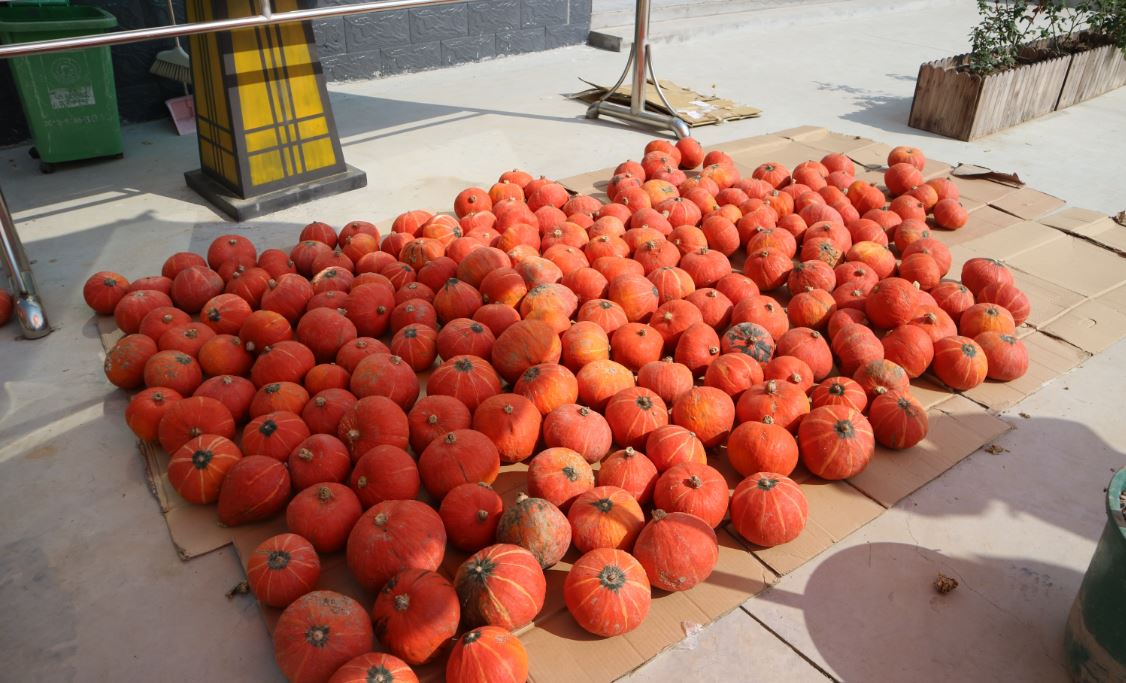 Pumpkins harvested from Dahuaishu village, waiting to be packed.

"SF Express is the fastest and China Post can reach the most remote areas," Wang said.

Connecting with an e-commerce platform was more than enough to sell the village's products. But Wang also decided to build a brand for them to make the products distinguishable from others.

He asked an agency to design a logo for the e-commerce station with the elements of a tree, soil and a big ding, a pot ancient Chinese used to cook meat. That's because Dahuaishu village is where people discovered the nation's largest ding, an artifact dating back to the Western Zhou Dynasty (c.11th century-771 BC) known as Chunhua Dading.

"It's important to help villagers build their confidence," Wang said.

"Every time I saw the logo on the mailbox, a sense of pride came to my mind. In the past, I always worried about where to sell my cherries and even thought of giving up planting. With the assistance of e-commerce, the fruit can be sold all over China and I decided to plant more next year," Hao Shimin, 68, said.

Hao is a farmer whose wife suffered from necrosis of the femoral head. Earlier this year, with the money he earned from selling cherries, his wife had surgery for the condition.

"Thanks to the e-commerce platform that helped me to sell the cherries at a good price, which earned us 20,000 yuan ($2,826), my wife could have surgery in time," Hao said.

According to Wang, the Dahuaishu e-commerce station receives an average of 200 orders per day; its record for the most ever is 2,000 orders. From May 15, 2018, to the end of September the station has earned a total income of 600,000 yuan. 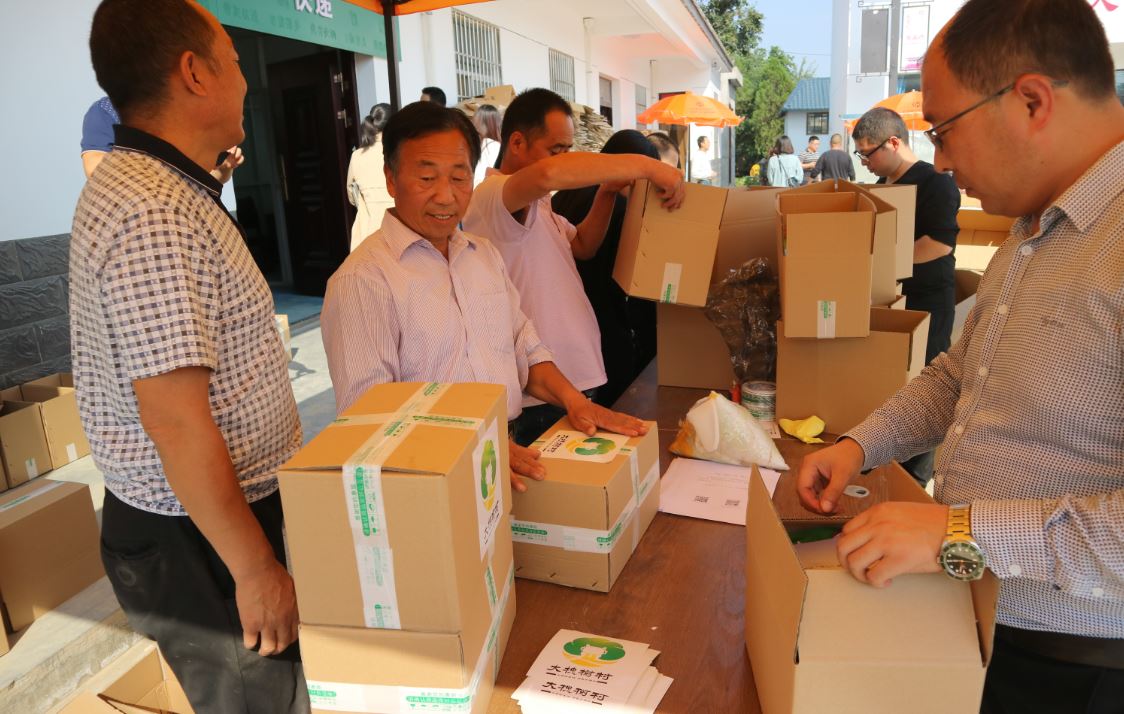 Villagers are packing products at the e-commerce station of Dahuaishu village.

Dahuaishu village is not the only place in Chunhua county where villagers use an e-commerce platform to sell goods.

Xi Yijun, 45, who lives in Xijia villiage, Guanzhuang town of Chunhua county, lost his legs in an accident 20 years ago. He ran a little shop to earn a living and his wife had to do all the farm work.

With the assistance of Gongyi Zhonghang, he began to help his wife sell their farm products.

"At the very beginning, I had no idea how sales would be. I wondered whether there would be anyone interested in the fruit planted by my wife. But things went beyond my expectation. The first day I ran the business, I got 21 orders, which encouraged me a lot.

"It is inconvenient for me to work without legs and thus my wife had to do all the work, which made her really tired. There was a time I almost lost confidence in life. However, since I joined the e-commerce platform, our sales became better and I could do all the work on a computer," Xi said with smile on his face.

According to statistics released by the Bank of China, there are 328 people who live in Chunhua county like Xi, who run their own businesses on the e-commerce platform to increase income.

"The reason for us to introduce e-commerce to them is not limited to helping them get rid of poverty, but to assist with building confidence and expanding horizons. It is important to let them know that with reform and opening-up, Chinese people can do business in a more direct and convenient way, which is also more beneficial," Wang said.