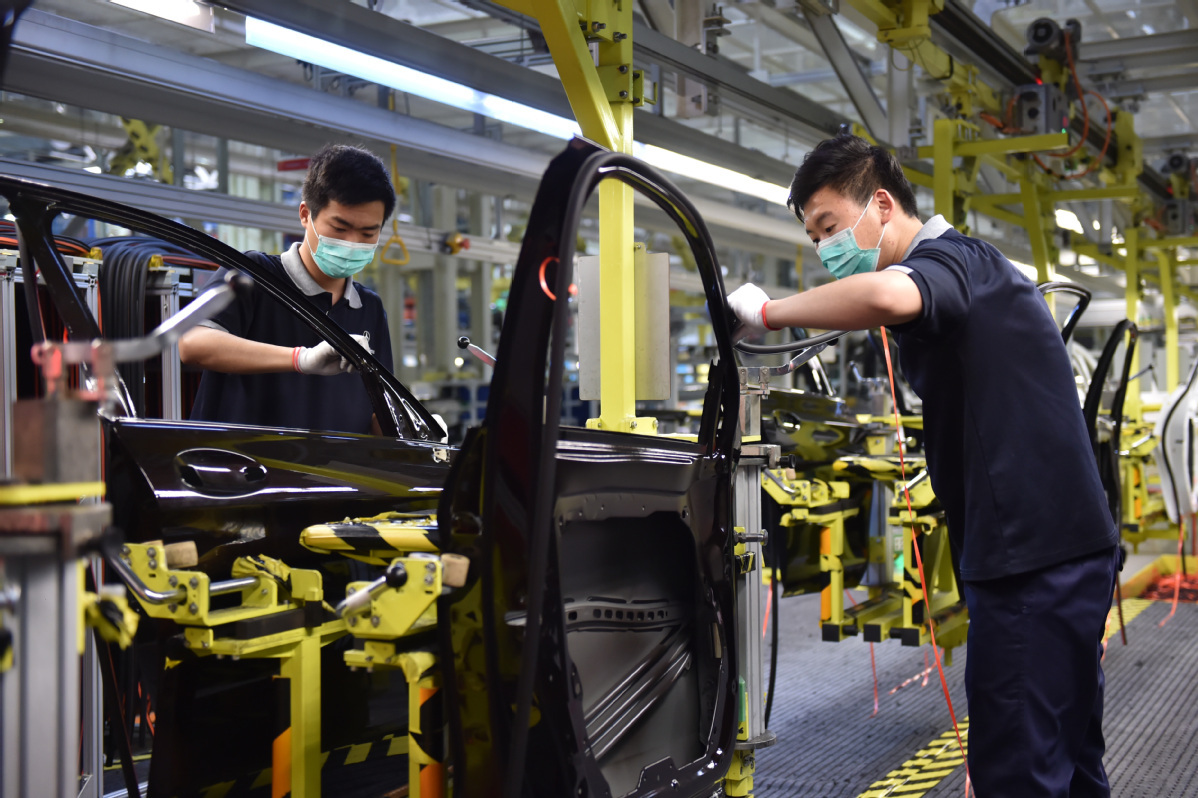 Workers at the production line of a carmaker in the Beijing Economic-Technological Development Area.(Photo: Xinhua)

The Beijing Economic-Technological Development Area, or Beijing E-Town, will continue to provide impetus to the capital's smart manufacturing industry with more supportive policies and better services for enterprises.

At least 10 companies from each of these sectors have annual revenues of more than 1 billion yuan ($150 million) each, according to officials.

"Unlike traditional factories, our efficiency has increased by more than 60 percent," said Zhou Yi, head of the completely-unmanned automated factory of Xiaomi Corp.

There are no workers at all in the factory. People can only see machine lights, robots moving the materials and delivery belts. The entire packaging is also done by the robots.

"All the manufacturing, processing and packaging are done automatically 24/7 even without lights," he said.

Lei Jun, founder and CEO of Xiaomi, the fourth-largest smartphone maker in the world, said the smart factory has helped hone the company's smart manufacturing capabilities, new materials and new technologies. Xiaomi will share its findings with the entire industry after they are mature and expects the findings to greatly reduce smart manufacturing costs.

Beijing E-Town has been providing an entire gamut of services covering investment and development for foreign companies in the area.

For instance, the administrative committee of Beijing E-Town teamed up with Schneider Electric SE, the French industrial group specializing in energy management and automation, in September to jointly build a smart manufacturing demonstration park in the area, with an aim of establishing an industrial cluster with upstream and downstream enterprises.

The park will spread over a total area of 100,000 square meters on the existing factory site and cover the whole production chain from research and development, production, sales to technology services.

Frederic Godemel, executive vice-president of Schneider Electric, said the company has been receiving extensive support from Beijing E-Town since the unit's inception in 1997.

"Schneider Electric is investing 100 million yuan in Beijing E-Town. China is the company's second-largest market and one of its four global R&D centers," said Godemel.

During the first six months of this year, despite the COVID-19 pandemic, Beijing E-Town has been continuing its policies and improving services to encourage existing foreign companies to increase investment and production and attract new enterprises from abroad to the area.

According to the authority, 14 new foreign companies have set up production bases or manufacturing projects in the area during the first half.

Liang Sheng, chairman of the area's administrative committee, said the government will step up efforts to cultivate science and technology talent and deepen international cooperation in the future.

"It is our responsibility to locate more high-end projects, provide better business services and natural environment for companies and residents in the area," he said.