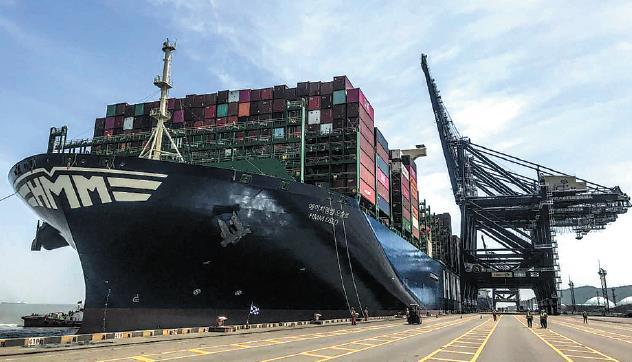 Container ship HMM Oslo is docked at the Daxie port in Ningbo, Zhejiang province, on May 19. (Photo: China Daily)

HANGZHOU -- The foreign trade volume of eastern China's Zhejiang province rose 8.6 percent year-on-year to 2.44 trillion yuan ($364 billion) in the first three quarters of this year, according to Hangzhou Customs on Monday.

Statistics show that in the third quarter alone, Zhejiang's imports and exports both hit record highs, with total foreign trade up 16.1 percent year-on-year to more than 969.8 billion yuan.

The province's foreign trade with the United States and countries in the European Union and the Association of Southeast Asian Nations maintained rapid growth in the first nine months. Its imports from Belt and Road countries jumped 34.5 percent year-on-year in the period.

"The rapid growth of imports is on one hand related to the country's macro-policies, and is on the other hand due to the recovery of domestic market demand," said Lu Haisheng, an official with Hangzhou Customs.

In the first three quarters, Zhejiang exported over 140.9 billion yuan worth of high-tech products, an annual increase of 21.6 percent, maintaining double-digit growth for seven consecutive months from March, Lu noted.