BUSINESS East Chinese town of Datang socks it to world

East Chinese town of Datang socks it to world 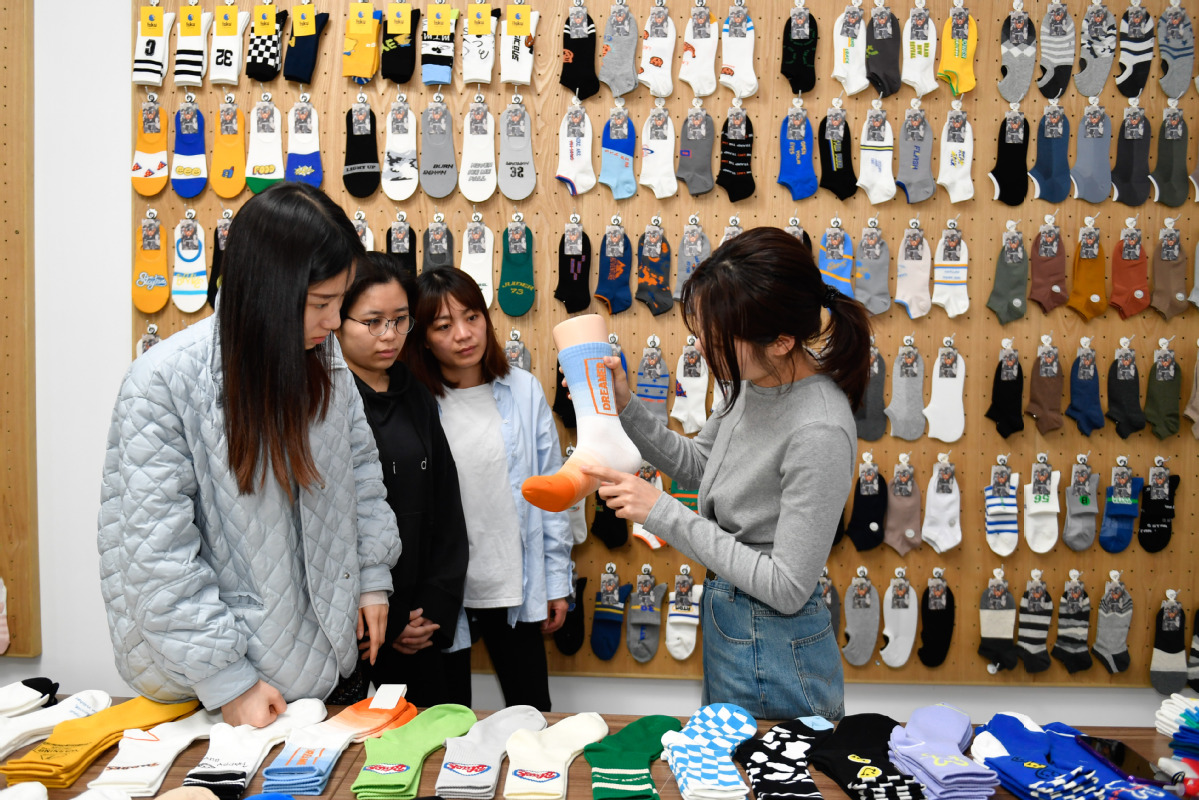 Spring is usually the offseason, but these days Yang Yucheng can often be seen in his plant, inspecting the production and quality of his products and communicating with his overseas clients about their orders.

"They can't come in person because of COVID-19, so we are now doing everything via the internet, and I need to make sure that every detail of our products is up to standard," Yang said.

Yang is the owner of Haina Textile Technology Co Ltd, a company that specializes in producing socks, with major export markets being Europe and North America. In the first quarter, Haina exported over 10 million pairs of socks, a year-on-year increase of nearly 87 percent.

In fact, Yang's company is one of over 6,000 enterprises－which would number nearly 10,000 if individual businesses and family mills were counted－producing and processing socks in Datang, a small town located in Zhuji, Zhejiang province.

Datang may well be unknown to the vast majority of people outside of China, but the socks and stockings that people wear around the world most likely hail from this place. Statistics show that the town's hosiery industry currently churns out as many as 27 billion pairs of socks worth 75 billion yuan ($11.14 billion) every year, accounting for 70 percent of the national market and 35 percent of the global market.

In other words, one-third of all pairs of socks worn on this planet sport the "Made in Datang" tag, and the town has long been known as the "Sock Capital of the World".

The story of the town goes back to the late 1970s, when locals first saw business opportunities in making socks. They bought used hosiery equipment, refashioned them into manually operated machines, and were soon churning out socks to sell along roadsides. Within a decade or so, a hosiery industry had gradually taken shape in the town. In 2004, Datang produced 9 billion pairs of socks to become the world's largest sock producer.

But it was not all smooth sailing. By 2014, it was apparent that the traditionally labor-intensive hosiery industry that had focused mostly on low-end products could no longer sustain itself, as profit margins dropped to as low as 5 percent and issues such as environmental pollution, unsafe production and vicious price competition came to the fore.

Within a year, thousands of substandard workshops and mills were shut down, and the remaining ones have been committed to upgrading.

Zhejiang Kaishili Technologies Co Ltd is one of them. In recent years, the company has invested heavily in product research and development. At present, it launches over 1000 types of high-end socks annually, integrating elements of traditional Chinese culture and arts.

"What we are making," says Qi Jianjun, the company's founder and CEO, "are socks that are not just to be worn, but to be showcased as an article of fashion and identity."

Qi has also been digitally transforming his factory. For example, with a 3D-powered design simulation system, it now takes only three to five days to settle product design with international clients, compared to a month in the past, when paper-based designs were the norm. And the machines can show in real time the manufacturing progress of each product and the status of each order.

Over the years, the development of Datang's hosiery business has not only enriched locals, but also benefited those from around China who have come to the town to pursue a better life.

According to the latest figures, the population with a Datang hukou or house registration stands at 76,600, in contrast to 111,000 who hail from elsewhere, mostly from outside Zhejiang. Among them, a total of 150,000 are employed in the hosiery industry, earning on average an annual income of more than 70,000 yuan.

"I arrived at Datang when I was only 17," said Zhang Xiaocun, a native of Ankang, Shaanxi province, who is the financial manager of a company called Incher. Starting as an ordinary factory worker, in the following two decades, she has worked all the way up, got married and now has two children, just as the company has grown from a family workshop to one producing some 25 million pairs of socks a year.

For Zhang, Datang is no longer simply a place where she works. It is her second hometown.

"My husband and I are planning to buy an apartment here," she said.