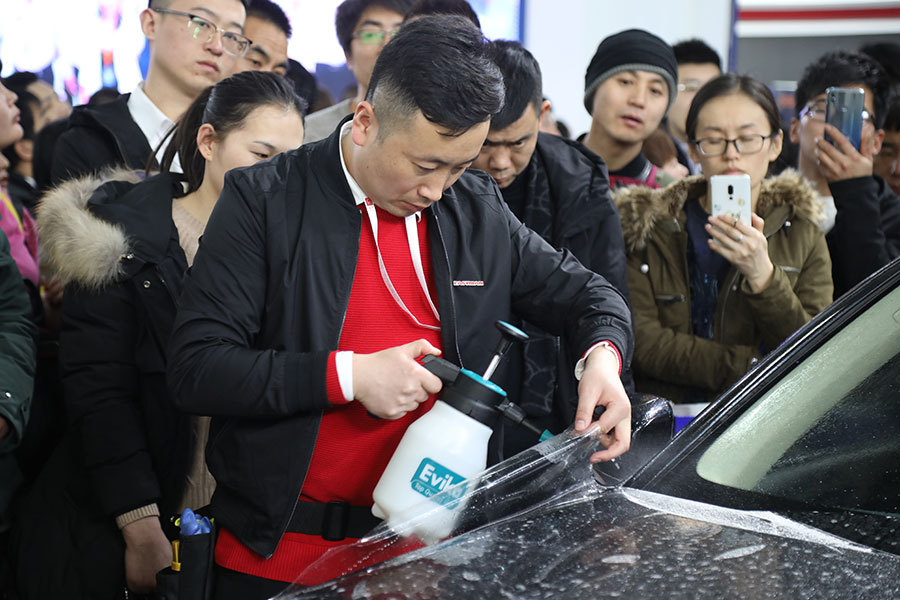 A technician trained by Eastman Chemical Co attaches paint-protection film in a demonstration session during an industrial exhibition in Beijing in April 2019. (Photo: chinadaily.com.cn)

As crossover branding is now a hot term for many sectors globally, V-KOOL, a premium brand of Tennessee-based specialty material manufacturer Eastman Chemical Co, has partnered with Transformers, a world-renowned brand under Hasbro Inc, the United States-based entertainment company, to seize more market share in China.

The co-branding partnership is established pursuant to a licensing agreement between two partners, according to Eastman.

Under the agreement Eastman will become the first company in the industry to obtain license for the Transformers, a well-known intellectual property. Eastman will leverage on the strengths of its industry leadership in respect of its services and products and introduce the Transformers brand to its customers.

Transformers is a globally celebrated brand. Since entering the Chinese market during the 1980s, it has gained enormous popularity among domestic consumers and has become a cultural phenomenon.

"We will seize on such possibilities and disrupt the traditional to unlock new means of communication with consumers," said Zhang Bo, president for Asia-Pacific at Eastman Performance Film Division.

Zhang said brand collaboration usually arouses consumers' curiosity, giving them a new reason to spend. It usually generates unexpected market feedback. As well as promoting the brand's image, it can also be used to boost sales.

Younger generation's penchant for lifestyle quality has helped boost the demand for luxury cars. Their emergence has gradually become the engine of growth for luxury car market. The entire car market has also become more diversified as a result, according to a report by Shanghai-based China Passenger Car Association.