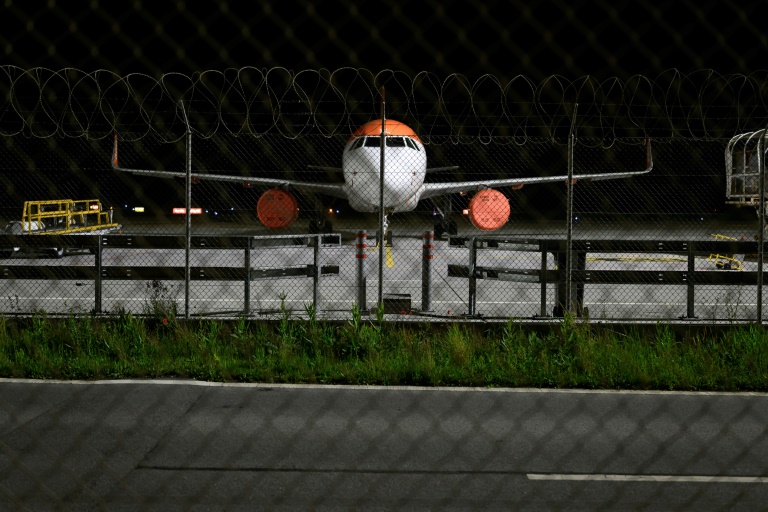 EasyJet will axe up to 4,500 jobs, or almost one third of its staff, the British no-frills airline said Thursday, as the coronavirus ravages demand for air travel.

The carrier follows rivals British Airways, Ryanair and Virgin Atlantic in slashing thousands of jobs to save costs as the bulk of planes remain grounded despite easing of government lockdowns worldwide.

"We are planning to reduce the size of our fleet and to optimise the network and our bases," EasyJet chief executive Johan Lundgren said in a statement.

"As a result, we anticipate reducing staff numbers by up to 30 percent across the business and we will continue to remove cost and non-critical expenditure at every level," he added.

The job cuts will impact up to 4,500 of the carrier's 15,000 staff, a spokesman told AFP. A consultation process will be launched in the coming days.

Thursday's announcement sparked an outcry from trade unions who are calling for state help for Britain's stricken airline industry.

"The statement from EasyJet follows the announcements of proposed job losses by other airlines and again demonstrates why it is imperative that the government urgently brings forward a bespoke plan to provide assistance to the UK's aviation sector," said Unite union official Oliver Richardson.

Lundgren said EasyJet wished "to protect as many jobs... for the long-term".

"We remain focused on doing what is right for the company and its long-term health and success, following the swift action we have taken over the last three months to meet the challenges of the virus," he added.

EasyJet, which grounded its entire fleet at the end of March, plans returning to the skies in mid-June with a limited number of flights.

EasyJet on Thursday added that it expects to cut its fleet by about 15 percent to 302 aircraft by the final quarter of 2021.

"Although we will restart flying on 15 June, we expect demand to build slowly, only returning to 2019 levels in about three years' time," stressed Lundgren.

"We want to ensure that we emerge from the pandemic an even more competitive business than before, so that EasyJet can thrive in the future."

Travellers arriving in Britain will meanwhile face 14 days in quarantine from next month to prevent a second coronavirus outbreak.

The pandemic has caused also bankruptcies and rescue plans across the aviation sector -- although Lufthansa is wavering over a nine-billion-euro ($9.9 billion) German state lifeline.

Lufthansa has said that its supervisory board was unable to back the deal owing to fears of overly-harsh conditions from EU competition watchdogs.

The International Air Transport Association has meanwhile forecast that global airlines will lose some $314 billion (286 billion euros) in 2020 revenues on the back of COVID-19.

EasyJet on Thursday added that it would not provide any outlook as a result of the turmoil.

"At this stage, given the level of continued uncertainty, it is not possible to provide financial guidance for the remainder of the 2020 financial year.

"However, as shown in this release, we continue to take every step necessary to reduce cost, conserve cash burn, enhance liquidity, protect the business and ensure it is best positioned on our return to flying," EasyJet said.