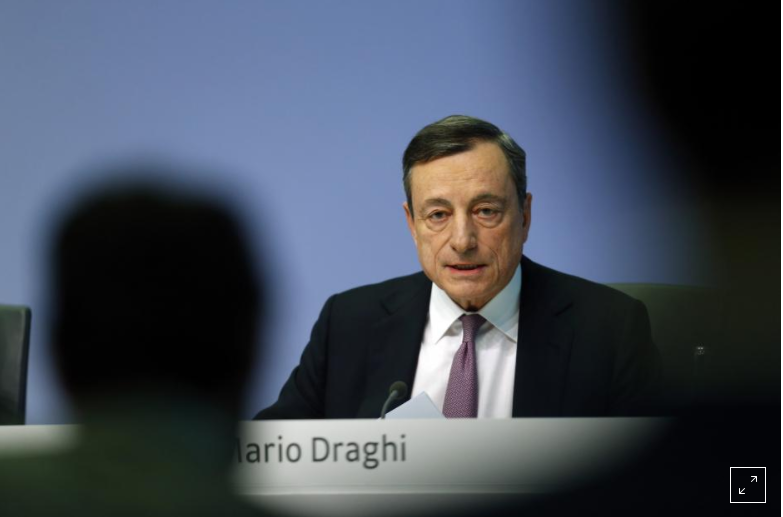 The European Central Bank dropped a long-standing pledge on Thursday to increase its bond buying if needed, taking another small step in weaning the euro zone economy off its protracted stimulus.

Keeping its broader policy unchanged, the ECB said it could still extend its 2.55 trillion euro ($3.16 trillion) bond purchase scheme beyond September if needed. But it skipped a reference to bigger purchases, a signal that it remains on track to end a three-year-old stimulus scheme before the end of 2018.

Speaking hours before U.S. President Donald Trump was due to impose new steel and aluminum tariffs, ECB President Mario Draghi said the euro zone could even grow faster than now expected and the biggest risks were a global trade war and efforts to ease bank regulation, another U.S. policy initiative.

Having revived euro zone growth with lavish stimulus, the ECB has been dialing back support in tiny increments, fearing that any big change could unravel its work and force an embarrassing and economically damaging policy reversal.

While its efforts are paying off and the ECB actually raised its 2018 growth projection, inflation - its singular mandate - will miss its target for years to come, well past Draghi’s eight-year term, which ends late next year.

“The outlook for growth confirms our confidence that inflation will converge toward our inflation aim of below, but close to, 2 percent,” Draghi said. “At the same time, measures of underlying inflation remain subdued and have yet to show convincing signs of a sustained upward trend.”

“Our mandate is in terms of price stability. Victory cannot be declared yet,” Draghi told a news conference.

Dropping its ECB’s so-called easing bias was largely symbolic as few if any expected bigger bond buying. Even Draghi called the move a “backward-looking measure”.

But the change, a unanimous decision, was still seen as a precursor to a broader revision of the bank’s policy guidance, a move flagged in earlier meetings and now seen coming closer to the summer months.

“Although (the change) signals little in itself, it re-affirms the direction of travel,” Neville Hill, an economist at Credit Suisse said.

“Unless there is a material slowdown – which we do not expect – then we anticipate further such shifts in language and tone in the coming months,”

“Incoming information, including our staff projections, confirms the strong and broad-based growth momentum in the euro area economy, which is projected to expand in the near term at a somewhat faster pace than previously expected,” he said.

Draghi nonetheless cited “rising protectionism” as a risk and while judging any direct impact from U.S. tariffs on steel and aluminum to be limited, said any U.S. move would add more generally to concerns over international relations.

“If you put tariffs against (those) who are your allies, one wonders who the enemies are,” he said.

The European Union has said it would retaliate immediately against any U.S. tariffs, which are based on a 1962 U.S. law allowing such measures for “national security”.

Draghi warned that tariffs lead to retaliation which lead to currency volatility and economic uncertainty, potentially complicating its decision.

The dichotomy facing the ECB is that while growth has blown past expectations, inflation remains weak, having hit a 14-month low in February. Indeed, Draghi said inflation would hover around 1.5 percent for the rest of this year and even in 2020 only rise to 1.7 percent.

While the bloc’s five-year growth run and a rapid drop in unemployment suggest that inflation will eventually rise, this rebound has taken many years more than expected and the rising euro could put a lid on price growth.

Launched amid fears of deflation, the ECB’s quantitative easing scheme depressed borrowing costs and induced firms to borrow and invest. While the deflation threat is long gone, the euro’s volatility risks derailing the bank’s efforts.

Indeed, while economists polled by Reuters expect bond buying to conclude at the end of this year, a first interest rate increase is expected only in the second quarter of 2019.

With Thursday’s policy decision, the ECB’s benchmark deposit rate will stay at minus 0.4 percent and the main refinancing rate, the main policy benchmark during normal times, at 0.00. Asset buys are set to continue at 30 billion euros per month.