ECB's Lagarde lauds EU for 'stepping up' with recovery plan

European Central Bank chief Christine Lagarde on Tuesday praised EU leaders for agreeing a huge recovery plan for their coronavirus-ravaged economies, saying it showed the bloc "steps up and comes together" in times of crisis. 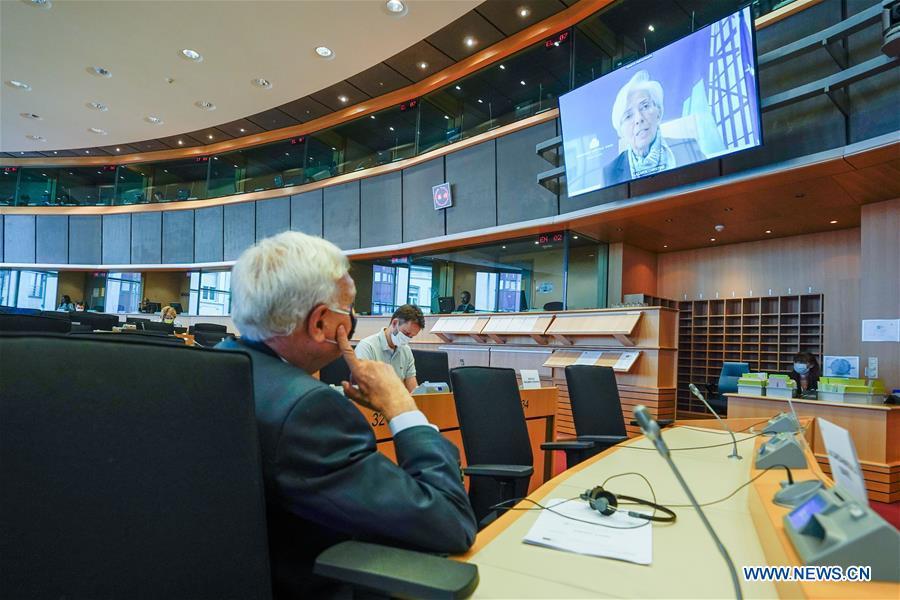 European Central Bank (ECB) President Christine Lagarde (on screen) speaks during a hearing at the Committee on Economic and Monetary Affairs of the European Parliament via video conference in Brussels, Belgium, June 8, 2020. (Photo: Xinhua)

After four days and four nights of wrangling, European Union leaders sealed the deal on a 750-billion-euro ($858 billion) rescue package that will consist of loans and grants for the hardest-hit member states.

The deal "shows that when most needed, the EU steps up and comes together to help the people of Europe," Lagarde tweeted.

"Thank you for your resilience and determined action over the last days. We can only fight the economic consequences of COVID-19 by working together."

The ECB has taken drastic action in recent months to cushion the economic blow from the pandemic, which has plunged the region into its worst recession in modern history.

The Frankfurt institution has rolled out an unprecedented 1.3-trillion-euro pandemic emergency bond-buying scheme as well as offering ultra-low rates and cheap loans to banks to help keep credit flowing and encourage spending and investment.

But Lagarde has repeatedly urged governments to support the efforts with fiscal stimulus.

ECB governors last week held back from topping up their monetary stimulus to the eurozone economy as the EU summit loomed, with Lagarde calling on leaders to do their bit and "agree on an ambitious package".

"After the ECB has been the only game in town for quite some time now, it looks like a second team has entered the game," ING bank analyst Carsten Brzeski said.

"That should take some of the pressure off of the ECB in the aftermath of this historical crisis. Probably even more if the second team was to improve its team play."