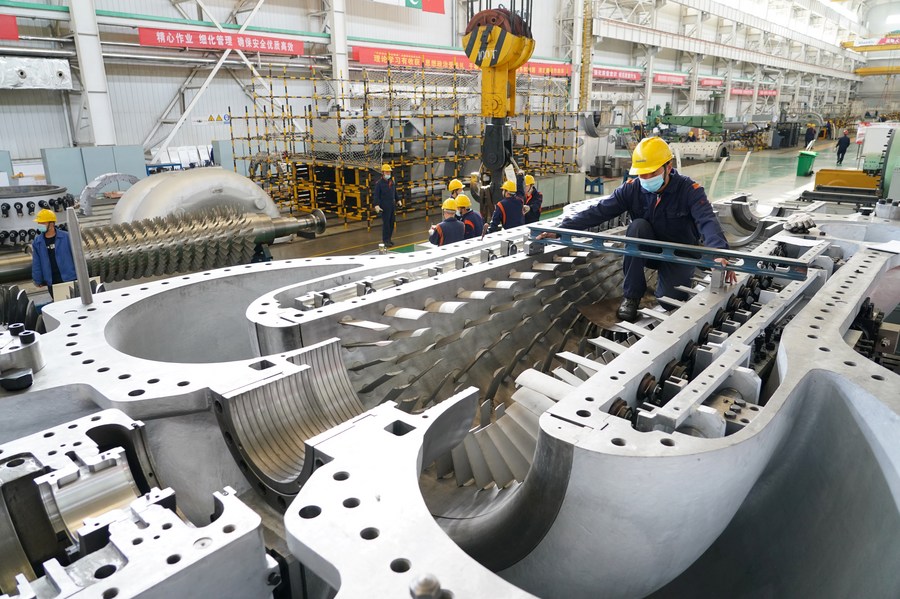 The growth was hard-won, said Peng, noting that the central SOEs saw their profits plummet more than 60 percent in the first four months last year when the country was yet to emerge from the impact of COVID-19.
"We had experienced ups and downs in 2020 but managed to achieve good results," Peng said.
The central SOEs raked in 30.3 trillion yuan in combined revenues last year, down 2.2 percent year on year, narrowing by 9.6 percentage points from the decline seen in the first quarter last year, SASAC data showed.
In December alone, central SOEs saw their revenues rise for the fifth straight month to 3.7 trillion yuan, an 11.7-percent expansion from a year ago.
The recovery came as the country stepped up efforts to boost the SOEs via ownership reforms and market-oriented operations. In 2020, the country started to implement a three-year action plan for SOE reform, which is expected to take reform in state-owned assets and firms to a new level.
Among the measures, a national fund totaling 200 billion yuan was established last year to facilitate the mixed-ownership reform of SOEs. By introducing private investors as stakeholders of the SOEs, the reform is expected to optimize corporate governance of the firms and enhance operational efficiency.
The companies have become more cost effective amid the reforms. In 2020, the sales and management costs of the central SOEs saw year-on-year declines, while the ratio of profits to costs increased 0.2 percentage points from a year earlier.
Tuesday's data also showed that China's central SOEs reported improved solvency and better debt structure.
The average debt-to-asset ratio of the central SOEs stood at 64.5 percent by the end of last year, down 0.5 percentage points from the previous year, achieving the country's deleveraging target for SOEs, Peng said.
China has set a timetable for SOE deleveraging as part of efforts to defuse financial risks. The average debt-to-asset ratio of SOEs should be reduced by 2 percentage points by the end of 2020 compared with that at the end of 2017, according to guidelines released in September 2018.
The SASAC will strive to build on the deleveraging results and keep the debt-asset ratio of most firms stable, the SASAC said, vowing further efforts to forestall major debt risks.