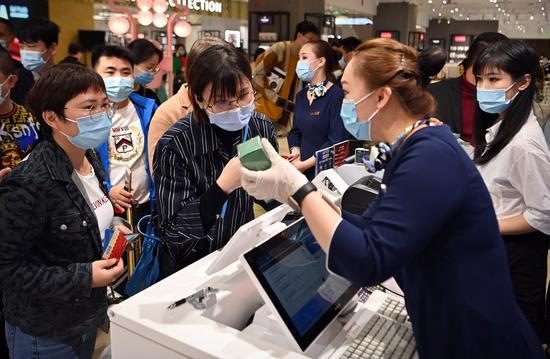 Sharp increases in China's retail sales volume during the Lunar New Year holiday week in February indicates that China has become a linchpin of not only the global supply chain but also global consumer spending, said a U.S. scholar.

China saw strong holiday spending nationwide, including by rural households and in tier-3 and tier-4 cities, Khairy Tourk, professor of economics at the Stuart School of Business, which is part of the Illinois Institute of Technology in Chicago, told Xinhua News Agency.

Chinese youth now "represent 25 percent of the country's population but 60 percent of total spending growth". This is the first year ever when China prompted the development of the digital yuan, and "there has been a jump in sales among Chinese brand names, which shows the rise of high quality in Chinese manufacturing," Tourk said.

"The Chinese middle-income group has experienced the fastest expansion the world has ever seen. Its size in 2020 was 400 million, and it is expected to double by the year 2035. The group is the largest in the world and (Chinese) consumers keep increasing their spending faster than any other countries in the world," he added.

"The world has a large stake in China's economic growth; the (Chinese) economy has become an indispensable part of the world," Tourk said, adding that this bodes well for the global economy and world peace, and explains why the idea of decoupling is a non-starter.

The International Monetary Fund said China accounted for 28 percent of all growth worldwide from 2013 to 2018, making it the engine of global economic growth.

"The effective way in which China dealt with the pandemic has been one of the best ways to demonstrate scientific knowhow, government competence, and people's trust in the leadership," he said.

Furthermore, "China (is) supplying global public goods in the form of pandemic aid to different countries," and sending medical help to numerous countries. "With developing nations having been extremely wounded by the pandemic, the Chinese manufactured vaccines are practically the only hope for most poor countries to terminate the pandemic," Tourk said.

China has achieved many firsts in 2020, including eradicating absolute poverty, landing spacecraft on the moon and containing the pandemic. Most importantly, "The Chinese economy avoided contraction and China was the only large country with positive GDP growth," he added.