BUSINESS Economists concerned over effects of US relief package

Economists concerned over effects of US relief package 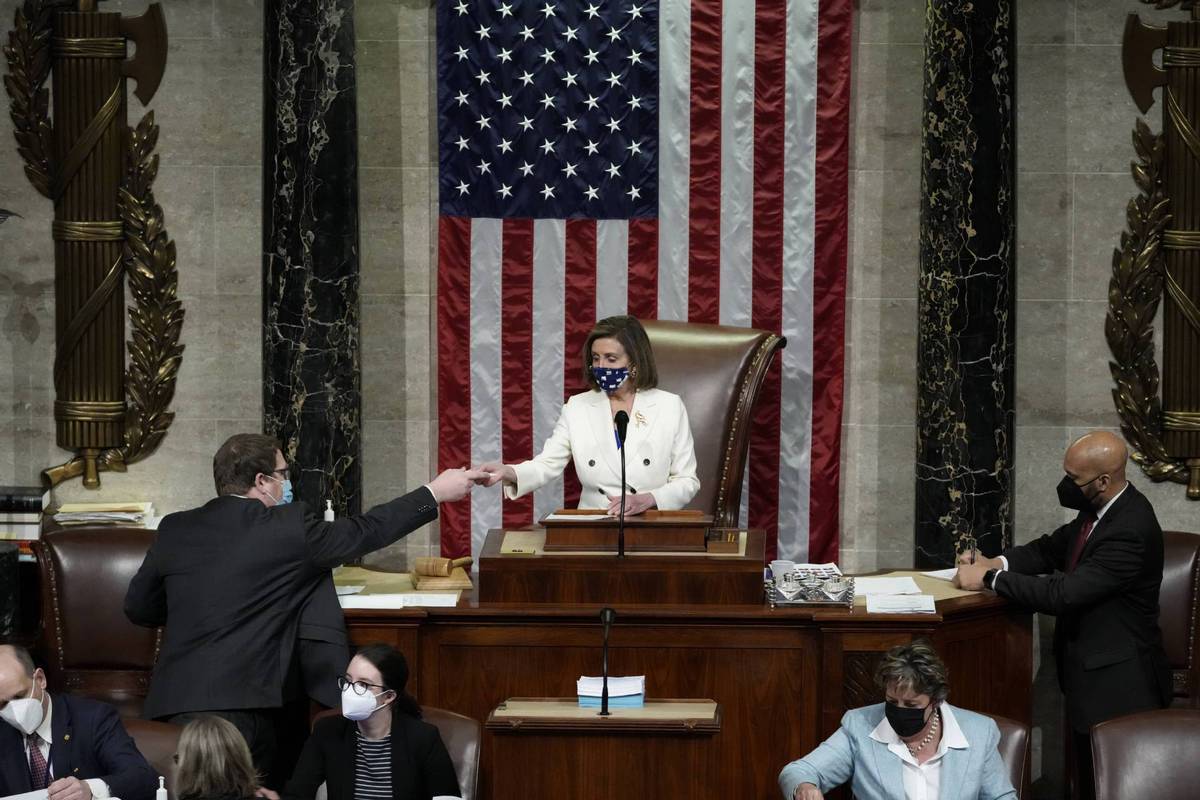 Speaker of the House Nancy Pelosi presides over voting on coronavirus relief package H.R. 1319 in the House Chamber of the US Capitol in Washington, DC on March 10, 2021. [Photo/Agencies]

China should prepare for ripple effects from the United States' $1.9 trillion fiscal relief package, which may boost US imports and fuel price increases as huge liquidity is injected into the vulnerable global financial market, experts said.

The US administration is expected to implement the stimulus plan in the coming weeks following Thursday's signing of the legislation, which will include $1,400 direct payments to individual US taxpayers to promote consumer spending, an increase in unemployment insurance supplements and funds for vaccine distribution.

The move will increase the total of all US rescue packages since the outbreak of the COVID-19 pandemic to $5.7 trillion, which accounts for about 27 percent of the US nominal GDP in 2020. It is much bigger than the stimulus during the 2008 global financial crisis, according to Shen Jianguang, chief economist at JD Digits, the digital technology subsidiary of JD.com.

"China should pay close attention to recent changes in the global market," said Zhang Xiaohui, former assistant to the Chinese central bank governor and dean of the PBC School of Finance of Tsinghua University.

The former central bank official warned that a large inflow of liquidity into the financial market could result in a rise in asset prices, which might fuel inflation expectations and increase volatility.

Zhang suggested that the People's Bank of China, the central bank, better manage public expectations, which will require more frequent and transparent communications with the public. Much clearer explanation of the monetary policy framework is needed, Zhang said.

A preliminary estimate from the International Monetary Fund showed that the recently passed US rescue package would increase its GDP by 5 to 6 percent over three years, Gerry Rice, director of the IMF's communications department, said on Thursday.

Most countries should benefit from stronger US imports of commodities, goods and services, which will aid global economic recovery. But as always, a watchful eye on potential risks is needed, according to Rice.

With US dollar funding costs being very low, the risks of a sudden tightening in financial conditions should be carefully managed by the US Federal Reserve and other central banks in advanced economies, Rice added.

Emerging markets and developing economies, especially those with financial vulnerabilities and weak trade ties to the US, should be ready with contingency policies for potential downside risks and possible tightening of financial conditions, the IMF official suggested.

The annual two sessions of China's top legislature and top political advisory body, which concluded in Beijing on Thursday, passed the Government Work Report, which targets an "above 6 percent" GDP growth rate this year. Analysts saw it as a signal that China is putting a greater emphasis on quality of growth, rather than quantity.

The IMF's January forecast of China's GDP growth rate was 8.1 percent for 2021, which means that the official goal could be easily reached. Chinese officials said that fiscal and monetary policies this year will be less expansionary in order to reach a "normalized" status.

"China may take a longer period of time for a policy normalization, as the core CPI(consumer price index, a gauge of inflation) is still at a low level," said Zhang Bin, a senior researcher at China Finance 40 Forum. He suggested that China should avoid a sudden tightening of its economic policy.

To sustain growth, policymakers should consider boosting production in the private sector through monetary measures instead of enhancing the government's spending through extending fiscal deficits, Zhang said.

After an earlier forecast that the US central bank might end monetary easing earlier than expected because of the availability of vaccinations and accelerating economic recovery, 10-year US Treasury yields surged beyond 1.6 percent to a multiple-year high in recent weeks and stocks in some major markets slumped.

The European Central Bank on Thursday promised to accelerate the pace of bond purchases over the next three months, to contain the rise in financing costs and a faltering economic recovery.

Ongoing monetary easing in major economies may lead to sufficient liquidity and raise global inflation to a peak in May, said Huang Haizhou, managing director of China International Capital Corp. He said he expected the renminbi to be stronger against the US dollar and a basket of its peer currencies, and yuan-denominated assets to remain attractive to investors from overseas.

"But we need to monitor the changes in stock prices and exchange rates in order to avoid huge outflows of foreign capital for speculative purposes," Huang said.